The death of a 20-month-old girl is being investigated by the coroner’s office after it was revealed the child repeatedly vomited and appeared unwell over a 22-hour period before medical help was sought.

Witnesses have told investigators baby Isabella Lamont appeared to be in pain when she was collected from Cool Frogs childcare centre in Wodonga in 2018, but despite her symptoms was taken home and then to a restaurant the following day. 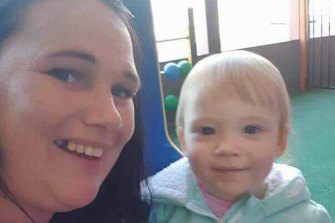 Desperate for answers: Mother Patricia Lamont with her daughter Isabella, who died in October 2018.

She died in the Royal Children’s Hospital two days later, her cause of death unexplained.

On Tuesday coroner Leveasque Peterson travelled to Wodonga for a directions hearing into the matter.

She was told Isabella had been living with her father Michael Kell, his new partner Leesa Pullen and her children, after Mr Kell separated from the infant’s mother, Patricia Lamont, in 2018 when Isabella was five months old.

Counsel assisting the coroner Libby Murphy said Ms Pullen collected Isabella from the childcare centre on October 4, 2018, and noticed she appeared to be in pain.

Following her evening meal, Isabella began repeatedly coughing and trying to put her fingers down her throat. Her temperature was checked and appeared normal and the child was put to bed at 6.30pm in a room she shared with three other children.

Ms Murphy said evidence suggested Isabella’s cough persisted throughout the night and she vomited before being settled with water.

She reportedly began making moaning noises about midnight and spent the rest of the night on the lounge room floor with her father.

The following morning she appeared lethargic, constantly asking for water and continuing to vomit.

The coroner was told one of Ms Pullen’s children was celebrating a birthday so the family attended the Blazing Stump in Wodonga for lunch.

Isabella was placed in the children’s play centre but was soon found lying on the ground, the hearing was told. She was carried out by another child before being placed in a high chair.

Ms Murphy said after being offered food, Isabella again vomited and was put back into the play room. She was again found lying on the ground and was carried back out to the adults.

About 5.30pm, Isabella felt limp and was unable to hold herself up before her body stiffened and she began to turn purple, the coroner was told.

Paramedics were called but on arrival found the child barely breathing and non-responsive.

Isabella died on October 7 at the Royal Children’s Hospital.

An autopsy was inconclusive on her cause of death and found her cardiac arrest and brain swelling causes unclear. The coroner was told the doctor who performed the autopsy found this may have been caused by accidental or non-accidental head trauma, though neither could ultimately be favoured.

Isabella’s mother, Patricia Lamont, told The Age she was desperate for answers.

“The system did not support us properly while my daughter was alive and the justice system is prolonging my grief and heartache,” Ms Lamont said.

“I want answers. There needs to be … reforms to the systems that led to this tragedy.”

The matter will return to the Coroners Court at a later date.