Couple guilty of keeping a woman as a slave face court, await sentence

A housewife found guilty of keeping a woman as a slave in her Melbourne home has been described in court as a beacon of her community who instilled into her children the need to help others.

Kumuthini Kannan and husband Kandasamy Kannan were in April found guilty of keeping a woman as a slave in their Mount Waverley home for eight years, after their Supreme Court trial heard the Tamil Indian woman was on call around the clock as a domestic servant and to care for the couple’s three children, even as her health declined. 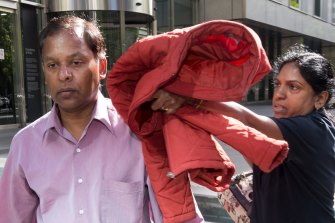 Kandasamy (left) and Kumuthini Kannan try to conceal their faces outside court in 2017.Credit:Jason South

Authorities only uncovered the offending when the woman, then in her 50s, was found by ambulance paramedics lying in a pool of her own urine inside the home on July 30, 2015, emaciated, weighing 40 kilograms and suffering from a urinary infection and undiagnosed diabetes. Mrs Kannan had raised the alarm.

The woman, who cannot be identified, later claimed Mrs Kannan physically and verbally abused her, including pouring boiling liquids on her, throwing hot tea in her face, hitting her with a frozen chicken and pushing her down stairs.

Prosecutors successfully argued to a jury the woman was a prisoner in the house as the Kannans denied her freedom to leave and to communicate with her family in India. She was unable to seek help in Melbourne as she was illiterate, did not speak English and had no connection to the local Tamil community.

While the woman travelled to Australia in 2007 on an agreement she would work for the Kannans, prosecutor Richard Maidment, QC, argued at trial she was denied proper payment and other rights and paid the equivalent of $3.39 a day. 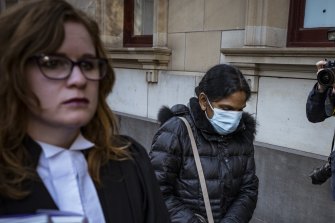 When her travel visa expired after a month, the couple kept the woman instead of alerting authorities she had overstayed her visa.

“They were all thrust into a situation where there was a condition of slavery,” Mr Maidment said on Tuesday.

The Kannans’ lawyers spent the first day of the pre-sentence hearing outlining exceptional circumstances and disputing the evidence the woman gave at trial.

Gideon Boas said Mrs Kannan’s conviction brought her exceptional hardship as the 53-year-old had a major depressive disorder involving struggles that dated back to her experiences as a “war child” in her native Sri Lanka during the country’s civil war, and were now linked to those of her children, who have psychological disabilities.

“We pull no punches in saying … the ramifications on her and on her children and on her family are profound,” Dr Boas said as his client slumped forward in the dock with her head down.

Dr Boas said character references described Mrs Kannan as a highly-valued member of Melbourne’s Tamil community who had a “passion” for assisting others such as cooking meals for the elderly during periods of COVID-19 lockdown.

“She’s doing these charitable acts and instilling into her children the importance of doing them and helping others,” the barrister said.

“She’s done what she’s done, that’s no question, but she’s entitled for your honour to consider her good character.”

While Dr Boas conceded a jail term was inevitable for Mrs Kannan, John Kelly, SC, called for Mr Kannan’s jail term to be suspended as he was far more “solicitous” and respectful to the victim. Prosecutors acknowledge the wife was the aggressor towards the victim.

Mr Kelly said Mr Kannan, 57, was a “decent man” who had applied himself to his IT work and family and was largely a passive presence in the household, although he failed to intervene to help the victim.

The defence lawyers disputed the victim’s evidence about her relentless work duties – her claims she worked 23 hours a day were impossible, they said – and it was difficult to determine when her health began deteriorating.

The victim was also considered a loved member of the family, the lawyers said, and the relationship dynamics made it difficult to know exactly what happened.

Dr Boas said the victim’s “flawed” evidence meant Justice Champion could not be satisfied beyond a reasonable doubt that Mrs Kannan physically abused her, though that was not an element of the charges.

The couple were found guilty of intentionally possessing a slave and intentionally exercising power over a slave, which carry maximum penalties of 25 years in jail. They remain on bail.

Mr Maidment said the couple recruited the woman from India in 2007 with the intention of keeping her as a slave, and their neglect of her health aggravated their offending. Defence lawyers argue the couple’s offending wasn’t premeditated.

The prosecutor will continue his submissions on Wednesday and the couple will be sentenced at a later date.