A friend of the woman who accused Christian Porter of rape has made a Federal Court bid to stop a high-profile Sydney barrister from acting for him in his defamation case against the ABC.

Jo Dyer, who was a debater with the woman in the late 1980s, filed an urgent application in the Federal Court, seeking an order to restrain defamation barrister Sue Chrysanthou, SC, from acting for Mr Porter on the basis that she previously advised Ms Dyer in a separate matter. 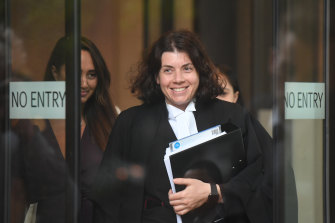 Sue Chrysanthou, SC, is acting for Christian Porter in his defamation case against the ABC.Credit:AAP

Ms Chrysanthou, who has acted successfully for a string of famous clients including actor Geoffrey Rush and Greens Senator Sarah Hanson-Young, is part of the star legal team Mr Porter has assembled in his defamation case against the ABC and journalist Louise Milligan. His team is headed by prominent silk Bret Walker, SC.

The former attorney-general, now the Minister for Industry, Science and Technology, is suing the ABC and Milligan over a February 26 online article about a rape allegation against a Cabinet minister. Mr Porter was not named but he alleges he was identifiable.

Mr Porter claims the article defamed him in a number of ways, including by suggesting he “brutally raped a 16-year-old girl in 1988”, when he was 17, and this contributed to her taking her own life last year, after she told NSW Police that she did not wish to pursue her complaint. Mr Porter strenuously denies the claims.

Ms Dyer was a good friend of the woman who alleged Mr Porter raped her when they were both student debaters.

In documents filed in court, she seeks an order restraining Ms Chrysanthou from acting in the case on the basis that “the order is necessary to prevent prejudice to the proper administration of justice, and to preserve confidentiality and legal professional privilege”.

Appearing for Ms Dyer at an urgent hearing in the Federal Court in Sydney on Wednesday, Michael Hodge QC said Ms Chrysanthou was “in a lawyer-client relationship with Ms Dyer and there is the real and obvious possibility that the information disclosed in the course of that relationship will have relevance to Mr Porter’s proceedings”.

Mr Hodge said there was the possibility of misuse of confidential information, but also the “possibility of apprehension of the interference with the administration of justice” if Ms Chrysanthou continued to act for Mr Porter.

Appearing for Ms Chrysanthou, barrister Noel Hutley, SC, said his client “will give evidence that she has no effect no substantive recollection of what is said to have been reported to her” by Ms Dyer.

“That’s been the subject of correspondence between solicitors … My client’s position is she is a member of the bar. She is an officer of the court. She will do anything that the court thinks she ought to do.”

Mr Porter was represented in court by barrister Nicholas Olson. It is anticipated Mr Porter will become a party to the proceedings, opening up another front in the increasingly bitter and costly court battle.

When Justice Thomas Thawley suggested Mr Porter might have separate legal teams for the defamation action and the present action to oust Ms Chrysanthou, Mr Olsen replied: “In an ideal world perhaps, but he’s a private individual and money is a significant consideration”.

The matter is expected to be heard in the week beginning May 24, shortly before a crucial hearing in Mr Porter’s defamation case.

The Federal Court has set aside June 1 and 2 to hear an application by Mr Porter to strike out significant portions of the ABC’s defence to his defamation claim, which may knock out some of its defences entirely.

Catch all the day’s breaking news