She stands with hands on hips, chin jutted out and ponytail swinging. The iconic Fearless Girl statue outside the New York Stock Exchange spawned a number of replicas, including one in Melbourne’s Federation Square.

Fearless Girl’s Melbourne sister, acquired in 2019 by Australian law firm Maurice Blackburn from the original artist, Kristen Visbal, to use in a campaign highlighting workplace gender equality and equal pay, has now lived up to her name and stared down a Federal Court fight. 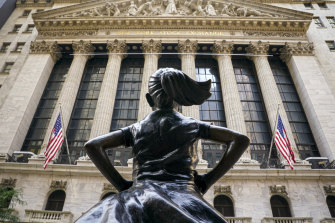 In 2018 Fearless Girl, commissioned by State Street Global Advisors, was moved to the front of the New York Stock Exchange.Credit:AP

However, Justice Beach – who described the statue as “selfie-inducing (apparently)” – left open the question of the future display of the Melbourne statue, and whether any disclaimer would be required. Those questions will be resolved at a later date.

The court heard State Street commissioned Ms Visbal, an American sculptor, to create a bronze statue in 2016 of a “strong and confident girl” to stand opposite the Charging Bull statue in Manhattan’s financial district.

The statue was unveiled in March 2017 to coincide with International Women’s Day and was part of a global marketing push by State Street aimed at lifting the representation of women on boards. Fearless Girl was later relocated to a prominent spot opposite the New York Stock Exchange.

The artist retained the right to create, display and distribute images of Fearless Girl and three-dimensional copies of the statue, subject to some restrictions.

In February 2019, Maurice Blackburn struck a deal with Ms Visbal to acquire a limited-edition reproduction of Fearless Girl for its Australian gender equality campaign.

The court found State Street’s agreement with Ms Visbal gave it a worldwide, exclusive licence to display images of the statue in connection with gender diversity issues in corporate governance; the financial services sector; or itself and its products and services.

Justice Beach found Maurice Blackburn did not infringe those rights because its marketing campaign did “not refer to gender diversity issues in corporate governance or the financial services sector at all”.

The firm was also entitled to rely on the assurances of the artist’s New York-based lawyer that it was in the clear.

Justice Beach found Maurice Blackburn did not infringe State Street’s trademark in the words “Fearless Girl” because it used the words “principally to describe the replica” and not as a trademark.

A spokesperson for Maurice Blackburn said “it has been a long and hard fight, and we are pleased that the court has now resolved this matter in finding that our firm lawfully commissioned and unveiled a replica of the Fearless Girl statue”.

“For us, installing a Fearless Girl statue in Australia has only ever been about wanting to play our part in reminding all Australians that we still have a long way to go in the fight to achieve gender equality.”

At the end of each day, we’ll send you the most important breaking news headlines, evening entertainment ideas and a long read to enjoy.  Sign up to The Sydney Morning Herald’s newsletter here, The Age’s here, Brisbane Times’ here, and WAtoday’s here.