Singapore: There was a stark warning this week from the Malaysian state of Sarawak on the island of Borneo. Its deputy chief minister warned that the health system in the mountainous district of Kapit was stressed to the point where people would soon by dying in the hallways of its hospital – “similar to what we see in India”.

Kapit is a remote area – until a road from the city of Sibu 110 kilometres away was finished late last year, the only way to get there was a two-hour-plus speedboat ride on the Rejang River. 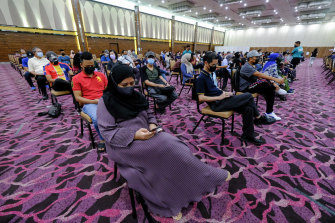 Malaysians waiting after they’ve received their first short of AstraZeneca in Selangor – experrts estimate they’ll run out of doses by July. Credit:Bloomberg

Malaysia’s worst outbreak of the pandemic has stretched far and wide, even exceeding India over the past fortnight in cases per million people before it was forced into a two-week nationwide lockdown.

In Sarawak, doctors report insufficient testing and a painfully slow vaccine rollout is a major concern, as is the mental health of medics working around the clock. They are also expecting another wave in two weeks as a result of Tuesday’s Gawai festival, held by the Dawak community to celebrate its rice harvest.

Malaysia’s plight has been symptomatic of a wave of the virus that has torn through south-east Asia since late March, gripping countries which had largely contained it previously.

There have been a record load of new daily cases in the past 10 days in Malaysia, Vietnam and East Timor and since the start of May in Thailand and Cambodia while Singapore has been in partial lockdown after its own spike, albeit with fractional numbers by comparison.

Vietnam’s discovery this week of a hybrid variation of strains first recorded in Britain and India was particularly alarming and helped trigger authorities to begin testing all of Ho Chi Minh City’s nine million residents.

Then there are fears infections are much higher than reported in Indonesia, the region’s hardest hit nation throughout the pandemic, as well as plummeting testing rates in post-coup Myanmar and a worrying rise in cases in the Philippines beyond metro Manila. 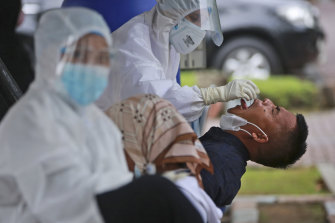 In the district of Kudus in Central Java, Indonesia, the number of new daily cases skyrocketed from 26 to 929 in a week after religious activities that followed the festival of Eid al-Fitr to mark the end of Ramadan.

“The situation is deeply concerning,” Indonesia’s COVID-19 taskforce spokesman Professor Wiku Adisasmito said on Friday night, noting that 189 health workers in the area were also exposed to the virus.

While much of south-east Asia fared well in the first year of the pandemic while the United States, UK and Europe wore the bulk of the pain, the rise of highly contagious variants and, in some cases, complacency have weakened their defences against the virus in its second year.

“We are still very much in the acute phase of [the] pandemic,” said Dr Poonam Khetrapal Singh, the World Health Organisation’s south-east Asia regional director.

A shortage of the vaccine in this corner of the globe is keeping inoculation rates low in all but Singapore and to a lesser extent Cambodia, but just how long these nations have to grin and bear it is in many ways out of their hands.

“I think the amount of pain that south-east Asia is going to endure will be a function of what happens in North America and in Europe or more specifically in vaccine-producing countries,” said Jeremy Lim, an associate professor at the National University of Singapore’s Saw Swee Hock School of Public Health.

“It is clear, as the WHO has candidly stated, that vaccines are not going to countries or areas that are most in need and there is a rich-and-poor-world divide.

In Malaysia, where the virus has struck in the greatest scale in the region in the past month, with a record 126 deaths in a day on Wednesday and total cases rising beyond 600,000, the surge has not showed much sign of slowing down five days into a hard lockdown across the country.

“It should be a minimum of two incubation periods, which would be four weeks, unfortunately. But I think we should really be talking about getting to a figure like five [new cases] per 100,000 population average over a seven-day period rather than getting to a date.”

Adeeba, who is also a member of the WHO science council and on the COVID-19 taskforce in the state of Selangor, has been critical of the Malaysian government’s widespread nationwide disinfectant exercises, saying the money spent on that would be better directed elsewhere.

But despite government missteps she, too, knows there is only one way out of the crisis.

“I believe our vaccine supply will pick up by July,” she said. “We all live in hope that there is light at the end of the tunnel.

“Until then, we’re going to have to suffer through these numbers.“