Cycle of 50-day strict lockdowns with 30 days off after each could be the safest way to beat coronavirus, Cambridge scientists say – but it would take more than 18 MONTHS to be rid of the disease

Regular six-week lockdowns could be the way to defeat the coronavirus, according to Cambridge University scientists.

Researchers have suggested that alternating between 50 days of strict lockdown and 30 days of more relaxed social distancing could be the safest way forward.

Under such a scenario an epidemic could last a year and a half, they said, but the number of people dying could be drastically reduced.

On the other hand, if governments did nothing and let the virus run rampant, the crisis could be over in six months but millions of people would die.

Their study comes as scientists and politicians in the UK grapple with the best way to help the nation out of the tight lockdown it has now been in for almost two months.

Regular periods of the the same strictness and the same length, separated by a month of lenience each time, could be the least damaging way to squash the virus out of existence, they said.

The team added that it would ‘allow populations and their natural economies to breathe at intervals – a potential that might make this solution more sustainable’.

It could ‘buy valuable time to shore up health systems and increase efforts to develop new treatments or vaccines’. 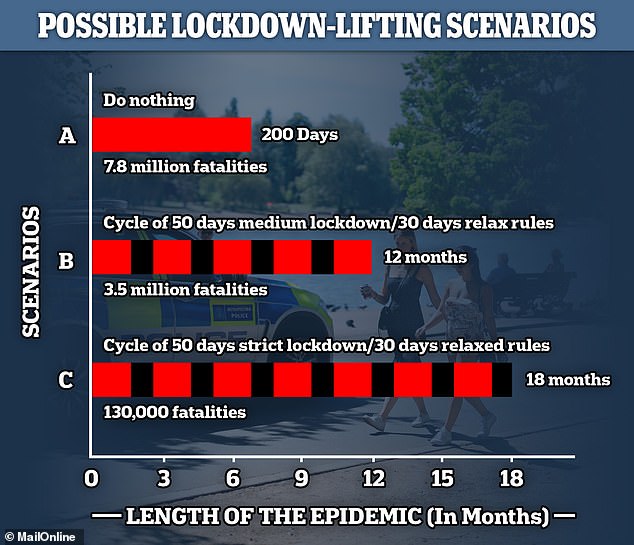 Researchers led by the University of Cambridge said stricter lockdown rules would make an outbreak carry on for longer but would keep the numbers of deaths lower. If governments in 16 countries around the world did nothing they could expect 7.8million people to die within six months, the scientists said, whereas if they used a system of regular six-week strict lockdowns they could keep deaths to around 130,000

Dr Rajiv Chowdhury, an epidemiologist at Cambridge, led the research which was modelled on 16 varied countries around the world.

None of the countries are known to be using the 50/30 method, but the epidemiologists modelled its effects on what they would expect in each nation.

‘Although we didn’t model the situation in the UK, I’d expect it to be very similar to that in other high income countries,’ Dr Chowdhury said, referring to Australia, Belgium, Chile and the Netherlands.

The paper drew up three possible scenarios for getting the COVID-19 pandemic under control and looked at how they would affect the length of the outbreak and the number of deaths it would case.

In general, a stricter lockdown system would lengthen the outbreak but reduce deaths, while loose rules get it over with quickly but could kill millions of people.

Professor Oscar Franco, from the University of Bern in Switzerland, said: ‘There is no simple answer to the question of which strategy to choose.

‘Countries will have to weigh up the dilemma of preventing COVID-19 related deaths and public health system failure with long-term economic collapse and hardship.’

In the ‘do nothing’ scenario, the pandemic would burn itself out in around 200 days (6.5 months) but kill some 7.8million people across 16 nations.

HOW DOES THE UK GOVERNMENT PLAN TO END LOCKDOWN?

People are allowed to return to work if they cannot do their jobs from home. This does not apply to non-essential retail and hospitality, which must remain closed.

Everyone should avoid public transport if they can, and walk, cycle or drive to where they need to go.

People can spend as much time as they like outdoors, and may travel by car to spend time outside. They can play sports with people they live with, and meet up with one person from outside of their household at a time. Social distancing (2m) must be maintained always.

Schools may partially reopen to children in years 1 and 6 and for a wider range of ‘essential’ workers’ families.

People may also be able to join two households into a social ‘bubble’ in which people from two homes can mix as much as they like.

Sporting events and concerts could also restart but without crowds or audiences – for television only.

High street shops may be allowed to start reopening, with social distancing in place.

Hospitality places, like bars, pubs and restaurants must remain closed.

Plans could include the reopening of businesses that were still closed: pubs, restaurants and hotels, hairdressers and beauty salons, churches and lesiure facilities like cinemas,.

But there is still a caveat at this stage that some places will not be able to open.

‘Some venues which are, by design, crowded and where it may prove difficult to enact distancing may still not be able to re-open safely at this point, or may be able to open safely only in part,’ the government warns.

The death toll would be so huge, the researchers said, because the number of people needing intensive care ‘would quickly exceed the available capacity significantly for every country’.

In the second scenario, countries could set up a cycle of 50 days of medium lockdown measures, such as social distancing, school closures, restricting large public events and isolating infected people, following by 30 days of relaxation.

During the relaxation period people would be encouraged to stay apart from one another but schools might be able to reopen and events to go ahead.

In this second scenario, the reproduction rate of the virus (R) could be held at about 0.8 – meaning every 10 people would infect eight more, so the outbreak would be shrinking – but it would take longer for the case number to get to zero.

An pandemic would last between 12 and 18 months using those rules and kill around 3.5million people in the 16 countries, Dr Chowdhury and his colleagues said.

The third and strictest rule could be a similar 50/30 cycle, but this time with a strict lockdown for 50 days before 30 days of relaxed rules.

During that time of ‘suppression’, the team said, conditions would be similar to those currently in place in Britain, with strict physical distancing enforced and non-essential businesses closed.

This would push the R rate to 0.5, shrinking the outbreak at pace, but it would take longer for the epidemic to come to an end.

Under this scenario, it would take longer than 18 months for the virus to peter out, the researchers said, but deaths across the 16 countries could be kept to around 130,000.

One of the reasons stricter rules would take longer to dampen the outbreak is that one of the best defences against a virus is herd immunity.

Herd immunity is a situation in which such a large proportion of people are immune to a virus – either because they’ve had it or they’ve been vaccinated – that it does not have a large enough pool of potential victims to infect.

By keeping people in lockdown and protecting them from the virus, the process of achieving herd immunity is slowed down because fewer people are exposed.

The study showed how in the ‘do nothing’ scenario (pink) there would be a short, sharp spike in the number of people needing intensive care. The scientists said this would overwhelm hospitals in every country. Meanwhile, in phased lockdown cycles (blue and orange), the surges in intensive care units would happen more often but be smaller and make it easier for hospitals to cope

It has the benefit, however, of enabling hospitals to care for everyone who needs it without getting overloaded, preventing deaths that could be caused by a lack of medical help.

Dr Chowdhury said: ‘This intermittent combination of strict social distancing, and a relatively relaxed period, with efficient testing, case isolation, contract tracing and shielding the vulnerable, may allow populations and their natural economies to “breathe” at intervals – a potential that might make this solution more sustainable, especially in resource-poor regions.’

The researchers said the rules would not have the same effects in every country and different economies would have to consider what was right for them. 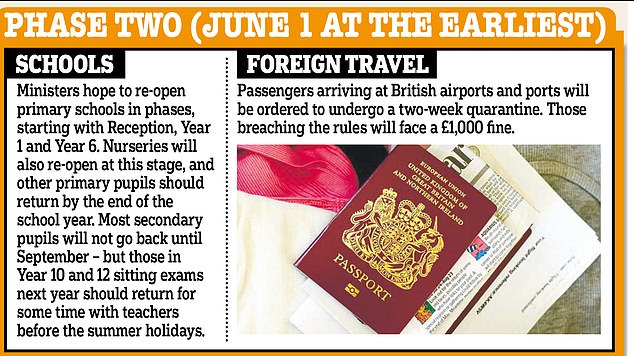 The UK Government has laid out approximately how it intends to move the country out of lockdown, if the number of new coronavirus cases can be kept low, starting with the partial reopening of schools in June 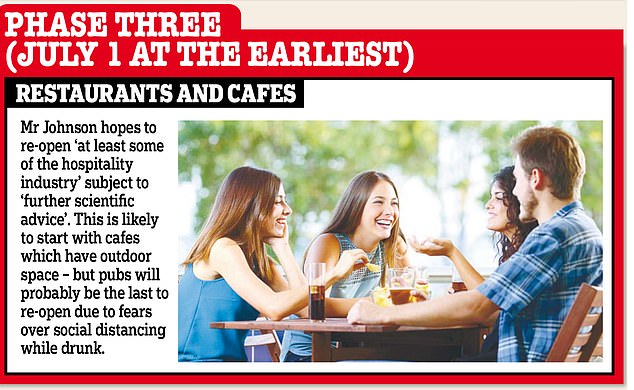 The University of Bern’s Dr Franco added: ‘Our study provides a strategic option that countries can use to help control COVID-19 and delay the peak rate of infections.

‘This should allow them to buy valuable time to shore up their health systems and increase efforts to develop new treatments or vaccines.

‘There’s no simple answer to the question of which strategy to choose. Countries – particularly low-income countries – will have to weigh up the dilemma of preventing COVID-19 related deaths and public health system failure with the long-term economic collapse and hardship.’

The research was published in the European Journal of Epidemiology.