A DAD who reportedly said the coronavirus was a political ploy, and called his state's lockdown "bulls***" has died of COVID-19.

John W. McDaniel, from Marion County in Ohio, was diagnosed with the virus in late March, and died in hospital on April 15. 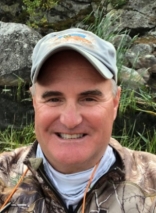 The 60-year-old man had allegedly posted several times on Facebook regarding the coronavirus, and the posts have been circulated widely on social media.

On March 15, he seemingly commented on Ohio governor Mike DeWine's stay at home order, which required shops, bars and restaurants to close.

"If what I'm hearing is true, that DeWine has ordered all bars and restaurants to be closed, I say bullshit!," the post reads.

"He doesn't have that authority. If you are paranoid about getting sick just don't go out. It shouldn't keep those of us from living our lives. 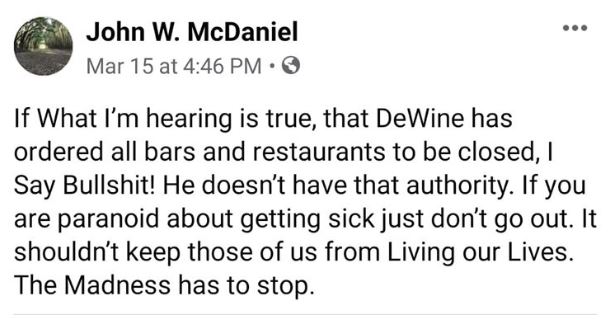 "The madness has to stop."

In another post, also believed to have been written by McDaniel, he asks: "Does anybody have the guts to say this Covid19 is a political ploy? Asking for a friend. Prove me wrong."

McDaniel's page appears to have since been taken down from Facebook.

In an obituary posted by Snyder Funeral Homes, McDaniel, who worked for the family business the O & M Company, was described as having a love of the water.

"You could not have known a more loving and loyal husband, father, son, brother, uncle, and friend.

"He was truly looking forward to building a new family cabin in the self-titled nature retreat of “Locwood,” fifty plus acres in Marion County where he and Lisa [his wife] had planned to enjoy their retirement years (damn Covid-19!)."

A service celebrating McDaniel's life will be livestreamed by the funeral home on April 22.

"On behalf of [McDaniel's] family, they would like to extend a heartfelt “Thank you” to the nurses at Marion General Hospital and to all the staff at Riverside Methodist Hospital for everything they did to try and save Johnny’s life from Covid-19," the obituary continued.

"They would also like to remind everyone to continue practicing social distancing to keep each other safe."

At least 491 people have died in Ohio from the coronavirus.

Across the US, protests have broken out calling on states to end the lockdown.

But the government's coronavirus expert Dr Tony Fauci has said the country's testing capabilities need to be upped by threefold, and opening the nation too soon could set the US back.