Covid continues dramatic DROP: Daily infections fall 23% to 41,270 while deaths decrease by 30% to 52 in a week… after Boris declared pandemic officially OVER

The latest date shows that the number of cases week on week has decreased by 12,825 from the 54,095 cases that were reported last Sunday.

Meanwhile there were another 52 deaths registered today – a 30 per cent fall from the 75 deaths reported on February 6.

It marks the twelfth day in a row that the daily number of new infections has fallen week-on-week, with the last increase being recorded on February 1 while the average total number of cases has been in freefall since mid-January.

It brings the total number of people to have received at least two doses of a vaccine to 48,718,497 whilst 37,724,528 have received a booster jab, according to the latest available figures. 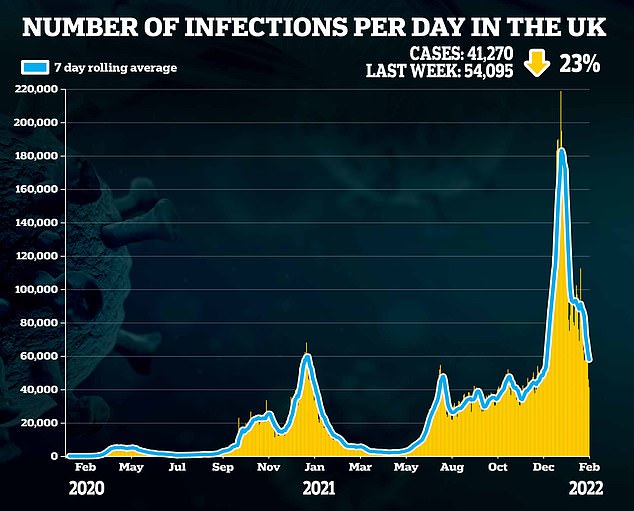 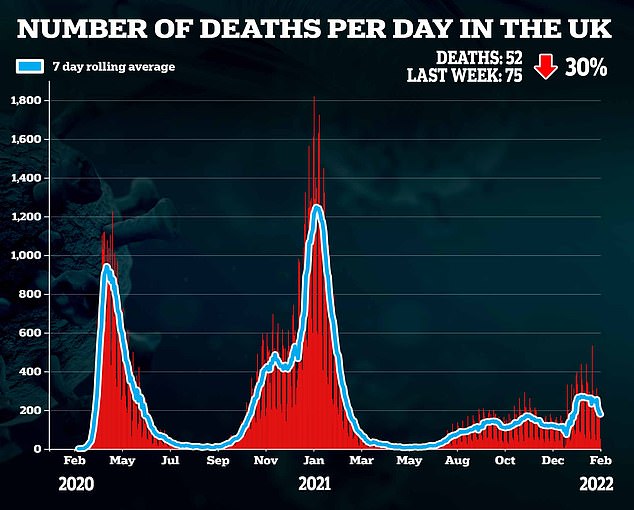 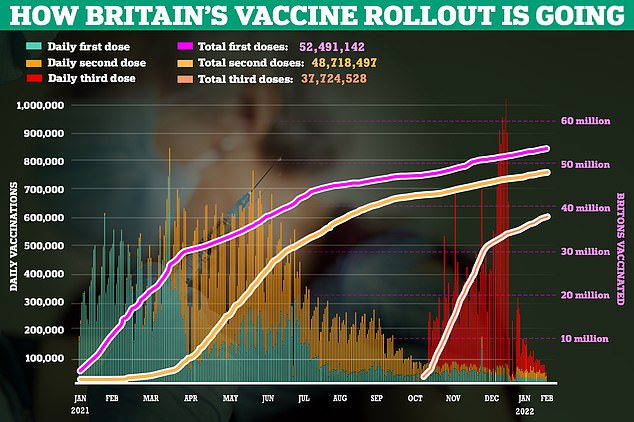 It comes as Boris Johnson’s new chief of staff said the Prime Minister will ‘trust the people’ to know best how to run their own lives.

Steve Barclay offered ‘red meat’ to disaffected Tory MPs and voters alike as he said it would be ‘a priority to restore a smaller state’ after years of Covid regulations and multi-billion-pound funding for workers and businesses.

He also admitted that recent weeks had been ‘frustrating’ but insisted the PM was the right person to turn Tory fortunes around.

It comes after Mr Johnson received a questionnaire from Scotland Yard demanding he truthfully set out his version of his behaviour around alleged lockdown-busting parties in No10.

He has seven days to avoid a fine by answering the form from Metropolitan Police officers investigating whether he broke his own Covid laws.

Writing in the Sunday Telegraph, former Brexit secretary Mr Barclay said: ‘Now, it is a priority to restore a smaller state – both financially and in taking a step back from people’s lives. 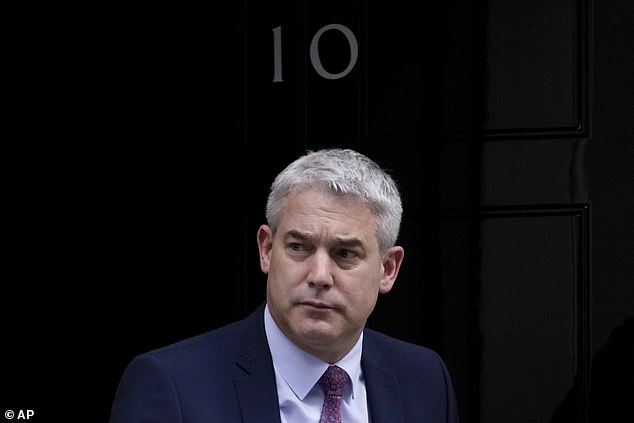 Steve Barclay offered ‘red meat’ to disaffected Tory MPs and voters alike as he said it would be ‘a priority to restore a smaller state’ after years of Covid regulations and multi-billion-pound funding for workers and businesses.

‘It’s time to return to a more enabling approach. To trust the people, return power to communities, and free up business to deliver.

‘I know how frustrating the recent weeks of speculation about the workings of government have been – for the people of this country, and for political colleagues.

‘But Johnson has apologised for the things we simply did not get right, and for the way that some matters have been handled.

‘And knowing the Prime Minister as I do, he is the best person to deliver the mission of renewal and recovery.’

Boris Johnson told MPs this week that he expects to end all restrictions, including the requirement to self-isolate following a positive test, this month — weeks earlier than scheduled.

But Sage experts say the Government should take various actions that could help protect the vulnerable as well as mitigate the general spread of Covid when rules are eased. 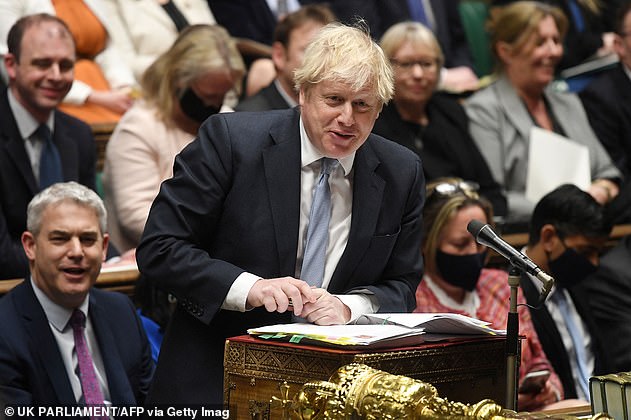 Writing in the Sunday Telegraph, former Brexit secretary Mr Barclay (pictured with Mr Johnson this week) said: ‘Now, it is a priority to restore a smaller state – both financially and in taking a step back from people’s lives’

In minutes from the group’s meeting on Thursday, members warned: ‘Increased ambiguity about a requirement to self-isolate upon testing positive will also disproportionately impact vulnerable sections of the population.’

They also raised concerns about the consequences of removing access to free testing and called for ‘clear and consistent’ messaging to the public about the ongoing risks.

The group said getting rid of free testing would make it harder for people to take precautions and ‘may also increase anxiety among those who have found testing reassuring after possible exposure, particularly those who are or live with someone who is clinically vulnerable’.

‘Some people may also take the removal of free and accessible testing as a signal that they should continue to attend workplaces/social gatherings while showing Covid symptoms, as these become conflated with other symptoms of respiratory illness such as influenza,’ the group added.

In response to this, Sage suggested the Government should take ‘various proactive measures’ to address the culture of ‘presenteeism’ at work, including encouraging people to work from home when unwell and providing ‘adequate’ sick pay for employees.

The group also emphasised the importance of public messaging as a way to reduce the impact.

‘Lifting of restrictions should be accompanied with clear and consistent messaging about the scientific rationale and continued benefit of protective behaviours to reduce transmission,’ Sage said.

Public messaging should also be employed ‘to stress the different needs and risk appetites of others,’ it added.

‘This should help to improve understanding of the continued need and adoption of protective behaviours by different groups and reduce the risk of social tensions, abusive incidents and stigma towards minority groups,’ the group said.

Sage also suggested that health authorities should take over the responsibility of public messaging, based on studies that show people have higher confidence in experts and are less likely to follow rules if trust in a government is low.

‘This could improve adherence but is dependent upon consistency across organisations, including central government,’ it said.

Covid restrictions had been due to expire on March 24, but Mr Johnson told MPs he expects they can end a month sooner if the data continues to be encouraging.

It means in just over two weeks England could be returned to levels of freedom enjoyed before the pandemic, for the first time since restrictions were brought in almost two years ago.