Home » World News » Dame Mary Berry, 87, reveals she has chosen the hymns for her funeral

Dame Mary Berry, 87, reveals she has chosen the hymns for her funeral

Dame Mary Berry, 87, reveals she has chosen hymns for her funeral and reserved a grave plot with her husband, 90, as former Bake Off star admits: ‘It may be morbid… but I’m not really too bothered because I won’t be here’

It’s not a task many of us would relish tackling.

But Dame Mary Berry revealed yesterday that she had chosen the hymns she hoped would be played at her funeral – and had already reserved the site of her grave.

The former Bake Off star said: ‘It’s a bit morbid to think about a funeral, but I’m not really too bothered because I won’t be here!

‘I’d like to have a party before it happens. I love having people round and sharing.

‘I have chosen some hymns. I keep everybody else’s funeral sheets and tick the things I like.’

Speaking at the Cheltenham Literature Festival, the 87-year-old said she and her husband Paul, 90, had reserved a double grave plot.

It is next to those of Dame Mary’s mother-in-law and the couple’s son, William, who was killed aged 19 in a car accident in 1989.

‘The main thing about old age is to do as much as you can,’ she said.

‘I do try to keep busy and do things and get out and plan the day – and Paul and I are enjoying learning croquet.’ 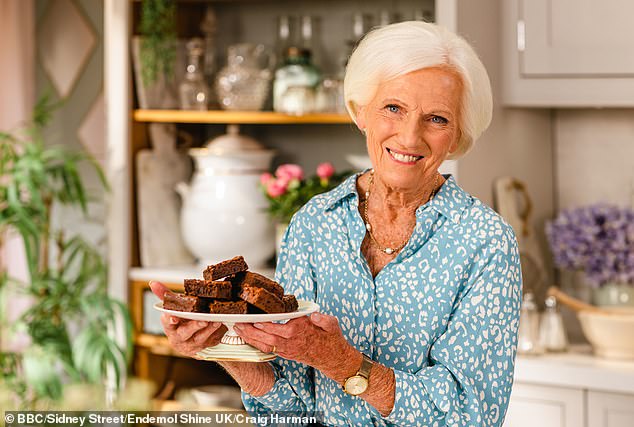 Dame Mary revealed last year how she spent ten days in hospital after breaking a hip.

Recalling the incident, which happened as she was picking sweetpeas, she told the audience: ‘That was a huge shock to me, and when I was getting better I did think how awful it was not to be able to do things.

‘But I did, because I did all the things that I was supposed to do, lots of physio and swimming. When I came out of hospital, my doctor said, ‘If you sit about and don’t do what you’re supposed to do, you will be dead in four years.’

‘It’s taken a year and a half and I’m feeling wonderful. So, if anyone breaks anything, for goodness’ sake do as you’re told, it’s worth it.’

Dame Mary also talked about an occasion when she had to turn down a lunch with the Queen and Prince Philip that clashed with a local cookery demonstration.

Recalling a conversation with a Royal secretary, she added: ‘I said tickets had been sold for this demonstration and I couldn’t let them down, even though I was sad I couldn’t join the Queen. It’s the way I have been brought up – if you promise to do something, you do it.

‘But then a quarter of an hour later, another phone call came through from the Palace with another date.

‘At the lunch, the corgis were running around all the time and at the end, the Queen opened a little silver box and gave treats to each of the three dogs and then they trotted off with a man wearing white gloves.

‘The Queen’s complexion was so perfect and her shoes looked so comfy. I’ll never forget it.’

Dame Mary has written more than 80 cookbooks and sold six million copies. Her latest, Cook And Share, is based on her BBC2 series. She said her aim was to create recipes that make readers ‘feel I am holding your hand all the way through’.