Daughter who's step-father shot her mother and sister relives ordeal

A heartbroken daughter who’s mother and sister were shot dead by her abusive stepfather when she was just ten years old has told of her horrific ordeal for the first time.

Chelsea Chambers, now aged 19, fled through her bedroom window after her mother Christine’s crazed ex-partner David Oakes broke into their home armed with a shotgun, an axe and a can of petrol in Braintree, Essex.

He threatened to kill Christine, their two-year-old daughter Shania, and Chelsea and said he would burn the house down before ordering the terrified mother to strip and torturing her for hours.

He made Christine cut off her own hair and threatened to put her ‘in a wheelchair’.

Terrified Chelsea was able to escape out of her bedroom window and run for help – but Oakes, a bouncer, had shot both Christine and little Shania at point-blank range and turned the gun on himself in a botched suicide bid before police arrived. 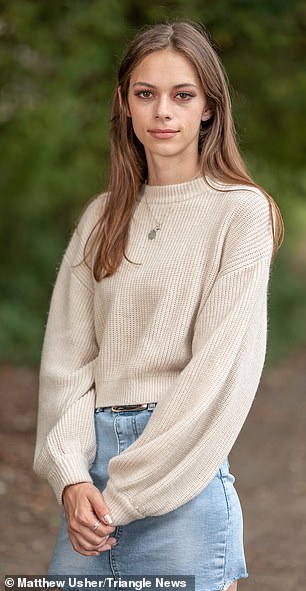 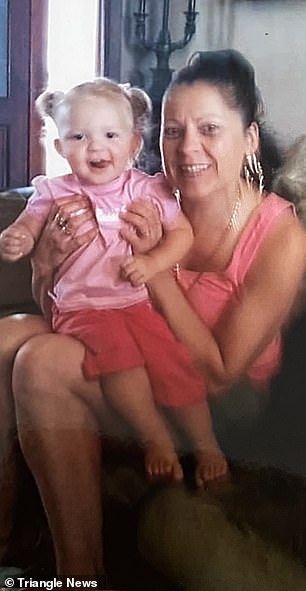 Oakes and Christine had been due to attend a scheduled hearing over custody of their daughter, two-year-old Shania, on June 6, 2011 – the day after the attack.

Now Chelsea, who clutched a teddy bear while giving evidence in court the next aged just 11, is speaking for the first time about the harrowing double murders of her mother and sister.

She said: ‘I hated David Oakes from the moment I first saw him. And I was right to. He ruined my life.’

Chelsea met Oakes when her mother – who was no longer with Chelsea’s father Ian Flitt – brought him home and announced: ‘This is my new boyfriend.’ It wasn’t long before he moved in. 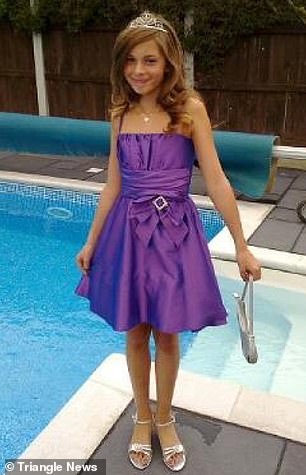 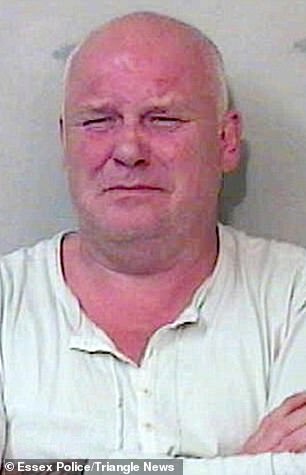 Chelsea Chambers (left), now aged 19, fled through her bedroom window after her mother Christine’s crazed ex-partner David Oakes (right) broke into their home armed with a shotgun, an axe and a can of petrol in Braintree, Essex

‘He asked me to call him dad, but I told him that I already had a dad who lived up the road. There was something about him that gave me the creeps, but he made mum happy so I just avoided him.

‘At first they seemed happy but then they began arguing and I saw him hit her. It was over something silly, but it quickly became a regular thing. I begged her to leave him but then she became pregnant with Shania and things seemed OK for a while.’

But the couple continued to argue until Christine asked him to leave and they began a bitter custody battle over Shania.

He let himself into the house the night before their were due to appear in court.

‘We were in mum’s room and watched Family Guy before we all fell asleep together in her bed. The next moment I heard a noise and when I opened my eyes I saw David standing over us,’ Chelsea said.

‘We suspected he had a spare key and usually blocked the door with a curtain pole, but that night we forgot. 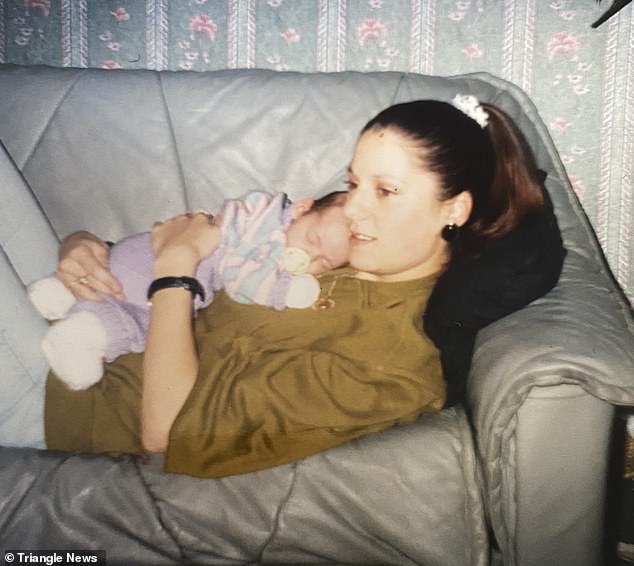 Terrified Chelsea was able to escape out of her bedroom window and run for help – but Oakes, a bouncer, had shot both Christine (pictured holding Chelsea as a baby) and little Shania at point-blank range and turned the gun on himself in a botched suicide bid before police arrived

‘He said he was going to kill us all and burn the house down. He had a big duffel bag out of which he pulled his shotgun, axe and a can of petrol.

‘I grabbed a phone and tried to hide under the bed to call the police but he yanked me out and smashed the phone with the barrel of the gun.

‘He told mum to take off her clothes and Shania and I sat on the bed screaming. David then ordered mum downstairs while I comforted Shania.’

After getting her little sister back to sleep, Chelsea crept to the top of the stairs to listen to what was happening below. 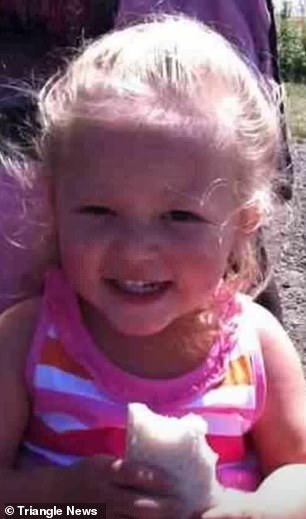 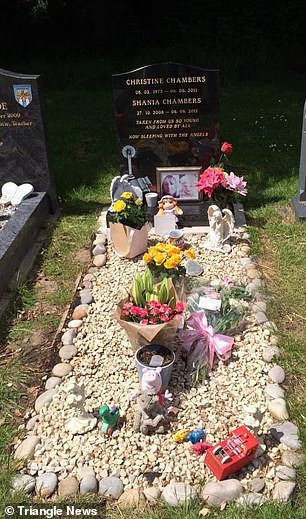 Oakes and Christine had been due to attend a scheduled hearing over custody of their daughter, two-year-old Shania (left), on June 6, 2011 – the day after the attack. Right: Christine and Shania’s grave

‘I heard David smash the TV with the axe and he threatened to cut off mum’s nipples. He was hitting her and making her chop off her hair.

‘He threatened to put mum in a wheelchair and said she’d have to wheel herself behind mine and Shania’s coffins.

‘I remember thinking we are all going to die and began to cry. They heard me and he said “go shut your daughter up”. Mum came upstairs. She was topless with clumps of hair missing and blood coming out of her mouth.

‘She held me tight and whispered in my ear to go and get help. She said she was proud of me and that she would always love me and would see me soon. Then she went back downstairs.’

Brave Chelsea quickly put on her trainers, and climbed out of her second floor bedroom window to run to her father’s house five minutes’ up the road.

After her father’s death, Chelsea spiraled into depression. Luckily, she then met her boyfriend Billy Hartland, 21 (pictured together)

‘I banged on Dad’s window, gasping for breath. It was 3am and he was surprised to see me.

‘I could hardly speak and burst into tears saying: “It’s David. He’s going to kill them.” Dad rang the police who sent officers to mum’s and to us.

‘We were taken to a police station and waited for news. We waited all night. It wasn’t until the next morning that we were told he’d killed them both.

‘I felt guilty for not waking up Shania. I could have caught her from the bottom and saved her but I was trying to save her and mum.’

Chelsea was comforted by Mr Flitt, who had split from her mother when she was three. They had two other children together, Levi, 25 and Guy, 21 who lived with Mr Flitt.

‘Mum was hilarious and my best friend,’ she said. ‘She was 38 and loud. She had a one of a kind laugh and we were so close. We used to sunbathe on the trampoline together.’

But Chelsea’s childhood changed after Christine started a relationship with Oakes. ‘I never knew what she saw in him – he was fat and ugly while she was so pretty,’ she said.

Despite lavishing Christine with holidays to Turkey and jewelry, Oakes soon turned vicious.

He struck Christine in front of Chelsea for the first time when she was seven.

‘It was over nothing – he said she’d embarrassed him while out for a drink. I was shocked and screamed but mum said it would never happen again.’

However, Oake’s violence intensified. Chelsea said she once saw her mother’s feet lift from the ground as Oakes strangled her against the bathroom door.

‘I jumped on his back and he flung me into a wall. He let go of mum and she was unconscious. I sat begging for her to wake up.’

The scared youngster became used to her mother wearing sunglasses inside.

Oakes even targeted Chelsea. She was once pelted with a can of beans which hit her eye.

Chelsea was given a glimmer of hope that things might change in February 2008 when Christine became pregnant with Oakes’ baby. 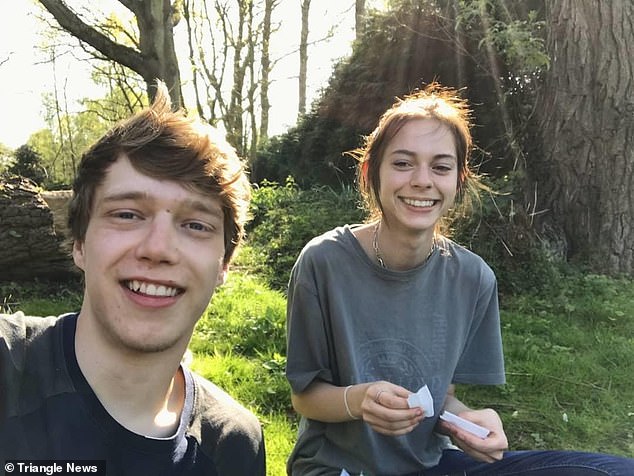 Billy and Chelsea (pictured) who live in Bury St Edmunds, Suffolk, are now planning to travel the world before starting a family

‘I’d always wanted a little sister and she was amazing. I loved looking after her and as she grew she was always so happy. I remember one time where we were picking berries in a field and she fell into a thorn bush and came out laughing.’

After six years, Christine finally left Oakes but she had to get a restraining order against him as he was threatening to kill her and kidnap Shania.

Oakes sent dozens of death threats in the week before the murders. Christine called the police but Oakes was not taken into custody.

Chelsea had to give evidence via videolink one year after her ordeal in April 2012 at Chelmsford Crown Court.

She said: ‘I was nervous and clutching a little teddy. David was apparently ill the day I gave evidence which I thought was pathetic. He was a coward.’

Oakes was given a life sentence after unanimously being found guilty of both murders by the jury but he died of cancer aged 51 – just four months into his jail term.

Chelsea, who now works at McDonald’s, said: ‘I was furious when I heard that.

‘I wanted him to have justice for tearing our family apart and I wanted him to feel a tenth of the pain and heartache he has caused me, which I will have to live with for the rest of my life.

‘I wanted him to languish in jail and have to relive that night over and over confined to a cell.

‘Four months of suffering is not anywhere near what he deserved.

‘He was the most selfish, cowardly, disgusting human I have ever come across and I pray that he is rotting in hell.’ 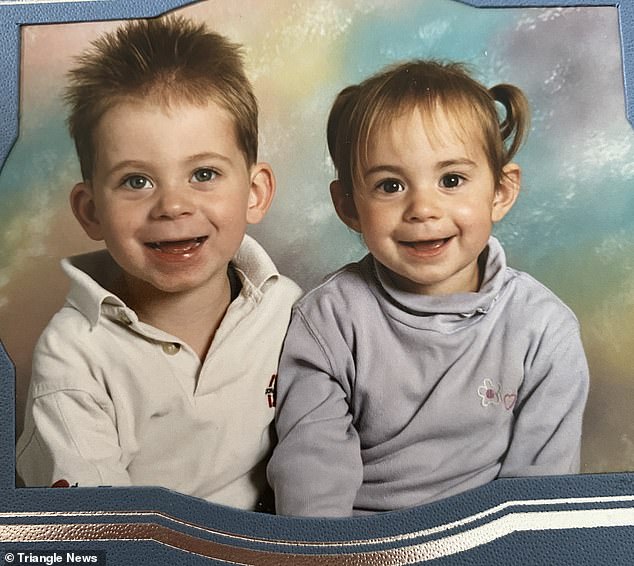 Chelsea was comforted by her father Ian Flitt, who had split from her mother when she was three. They had two other children together, Levi, 25 and Guy, 21 (pictured with Chelsea) who lived with Mr Flitt

Chelsea was awarded £21,500 in compensation for the police failings when she turned 18. She said Essex Police ‘could and should’ have done more to protect her family.

Chelsea added: ‘If the police had acted beforehand and responded to David’s death threats my mum and sister would still be here today.’

The Independent Police Complaints Commission (IPCC) said after the murders that Essex Police missed opportunities to arrest Oakes before he killed Christine and Shania.

In 2015, while living with her mother’s sister Jeanette, Chelsea suffered more tragedy when her father died of a heroin overdose.

She recalled: ‘I thought I was the unluckiest person in the universe. I loved Dad so much – he got me through losing Mum and Shania.’

After her father’s death, Chelsea spiraled into depression. Luckily, she then met her boyfriend Billy Hartland, 21.

The pair, who live in Bury St Edmunds, Suffolk, are now planning to travel the world before starting a family.

Chelsea said: ‘Billy is amazing and a great listener. I’ve opened up to him about my past and he’s supported me in every way.

‘I can’t wait to start our own family and give them an amazing life and home and tell them all about how amazing their nan and auntie were.

‘I want to make my mum proud so she can smile down at me from above.’

After deciding to share her story for the first time, Chelsea set up a GoFundMe page to help her move from a youth hostel and into her own flat.