A Chinese delivery driver has been hailed as a hero after using his body to protect a girl from a cleaver-wielding attacker before being slashed himself.

The saviour sustained wounds on his hand and back while confronting the suspect in the random attack last week in southern China, reported state media.

The culprit is alleged to have a mental illness and is under police investigation. 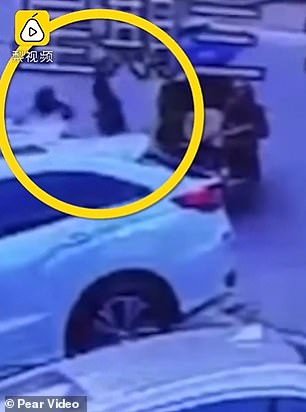 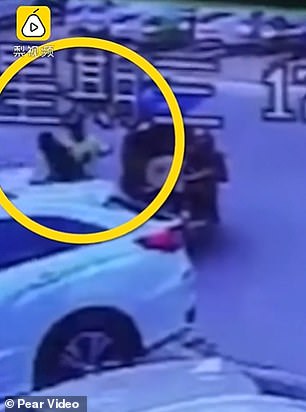 The Good Samaritan, Li Zhiwei, told reporters that it was his civic duty to guard the child who had run towards him for help. His condition has stabilised.

The incident took place on the evening of July 15 in Huizhou in southern China’s Guangdong Province.

According to a report from state broadcaster CCTV, the attacker had gone into a traditional Chinese medicine clinic which was owned by the girl’s father.

The stranger, who is said to be middle-aged, asked the owner if he could use his toilet, and the owner agreed.

A few minutes later, the visitor suddenly took a meat cleaver from his bag and charged towards the owner’s child who was doing her homework. 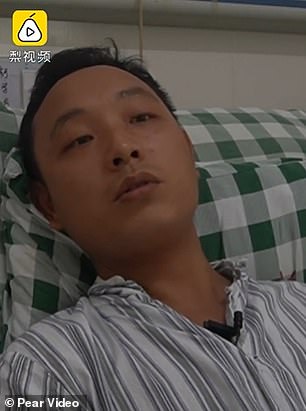 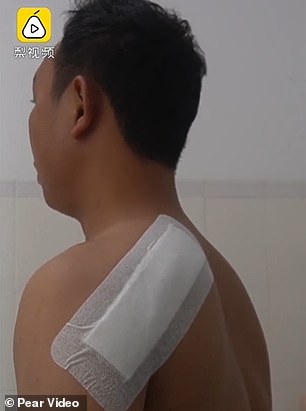 The brave driver, said to be in his 20s, told reporters that it was his civic duty to guard the child who had run towards him for help. He received over 40 stitches and is recovering in hospital

The frightened girl ran out of the clinic while yelling ‘help’ before bumping into the delivery driver Li.

Li told the girl to stand behind him and confronted the culprit who was chasing the girl. He was slashed twice by the suspect as he tried to tackle him.

Li collapsed after being attacked due to mass bleeding. He was taken to hospital by people living nearby.

Police arrived at the scene and brought the attacker under control.

The report said that the perpetrator lived opposite the clinic and was mentally ill. It remains unclear what illness he has and if he was capable of controlling his behaviour at the time of the incident. 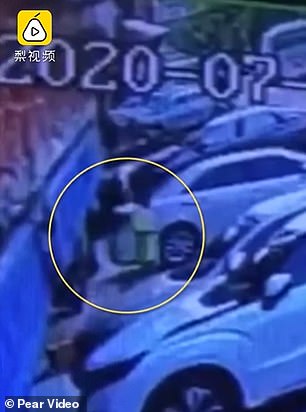 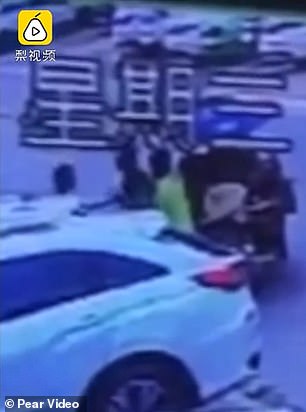 The girl had run out of her father’s traditional Chinese clinic (left, circled) when she bumped into Li, who happened to be working in the area. The driver told the girl to stand behind him

Surveillance footage shows the suspect assaulting Li as the girl ran away in horror.

Li received more than 40 stitches after being rushed to the hospital.

Recalling the event to Pear Video, Li said he was sliced first on his left hand then around his left shoulder when he tried to fend off the suspect.

The man, who is in his 20s, said: ‘If I hadn’t stepped up, there would be unimaginable consequences.’

He stressed that he was only an ‘ordinary’ person. He said he planned to return to his post as a delivery man after recovering from his injuries.

A spokesperson from Li’s company said the management planned to award him 50,000 yuan (£5,580) in recognition of his bravery and selflessness.