Dozens of residences have been evacuated as a wildfire in northeastern Minnesota continues to spread, according to the U.S. Forest Service.

The fire in the Superior National Forest near Greenwood Lake had expanded to about 3.1 square miles by Tuesday as crews fought the fire on the ground and from the air.

Lake County sheriff’s deputies and Emergency Management personnel went door to door to notify residents that they were in the evacuation zone, along McDougal Lakes, the Highway 2 corridor near Sand Lake and just north of Highway 1. About 75 residences were affected by the evacuation, the Forest Service said. 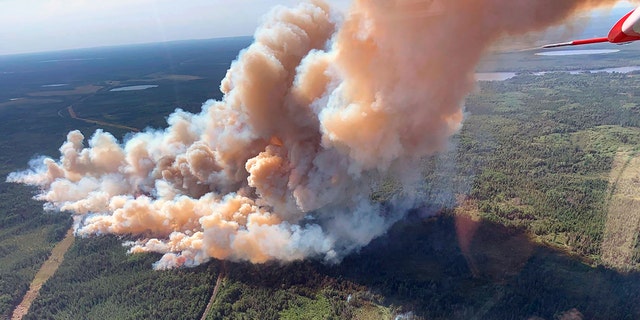 The fire was initially spotted around 3 p.m. Sunday and that night Gov. Tim Walz authorized the Minnesota National Guard to assist in the firefighting efforts, with fire dangers expected to remain high over the next several days.

“This summer, Minnesota has experienced abnormally high temperatures and a historic drought resulting in dry conditions conducive to wildfires,” Walz said in a statement.

Superior National Forest officials said in a statement that the cause of the Greenwood Lake fire had not been determined by Monday afternoon. The lake is located about 15 miles southwest of Isabella.

Byron Boler, a co-owner of Snowshoe Country Lodge on Sand Lake, told WTIP-FM in Grand Marais that he was doing outdoors chores Sunday afternoon when he spotted a “big cloud of smoke billowing up” about a quarter-mile southeast of his property and reported it. He said planes were soon scooping up water from nearby lakes and dumping it on the fire.

“If the wind would have turned at all, we would have lost a lot of land,” he said.

The smoke prompted the Minnesota Pollution Control Agency to issue an air quality alert for the inland portion of Lake County. The MPCA said southerly winds were expected over the region for the next few days and would transport the smoke plume north.

The Superior National Forest is also monitoring two new, lightning-caused fires that are burning in remote parts of the Boundary Waters Canoe Area Wilderness to the northeast. A fire west of Sawbill Lake had grown to 10 acres (4 hectares), while another south of Little Saganaga Lake was around 2 acres. Aircraft were dropping water to try to limit their spread.

Drought conditions from the western U.S. across the northern plains to Minnesota have raised wildfire risks across a broad swath of the country. In California, firefighters have struggled to contain the month-old Dixie Fire amid forecasts of more dangerous weather. That fire has scorched more than 900 square miles in the northern Sierra Nevada and southern Cascades since it ignited on July 13 and eventually merged with a smaller blaze called the Fly Fire.

There were nearly 100 large wildfires currently burning in the U.S. according to the National Interagency Fire Center.