Two Covid-19 survivors in Belgium and the Netherlands are struck down again after recovering, doctors claim after world’s first re-infection in Hong Kong

Two European Covid-19 survivors have reportedly been re-infected after recovering from the disease, raising more concerns about the strength of immunity against the coronavirus.

A Dutch patient who was old and had a weakened immune system and a Belgian woman who only had mild symptoms tested positive twice, local broadcasters claim.

Virologists warned the reports were ‘not good news’ and cautioned that thousands of people who have already fought off the disease earlier this year may have become sick again.

It follows yesterday’s landmark report of a Hong Kong man who was re-infected four and a half months after he was originally struck down. Genetic analysis revealed the 33-year-old’s second bout of the disease, which he caught on a trip to Europe, was caused by a different strain of the virus.

The cases are feared to prove that immunity to Covid-19 is only short-lived, which would make stamping the life-threatening virus out even more challenging because patients could be re-infected this winter.

But if the second bout of illness is less severe than the first, it may suggest there is a layer of immunity protecting Covid-19 survivors from becoming severely ill. 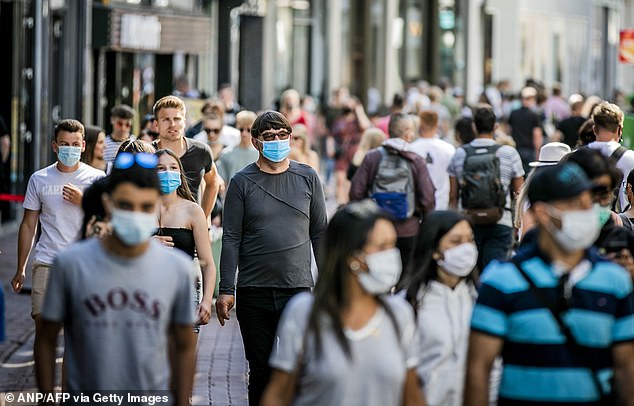 Two Europeans – one in the Netherlands and one in Belgium – have reportedly been re-infected with Covid-19 after recovering. Pictured: People wearing masks in Amsterdam

The patient’s gender or exact age was not revealed. It is currently unclear whether they had any symptoms of Covid-19 the second time or how long they had been clear of the virus for before testing positive again.

No details about the first time the patient became ill were reported either, leaving scientists in the dark about the exact details of the case.

August 24: The 33-year-old man — who had no known underlying conditions — tested positive four months after he recovered from his first bout of the life-threatening disease.

He was first diagnosed on March 26 after having a cough, sore throat, fever and headache, according to parts of the paper revealed by a journalist at the South China Morning Post.

In his second episode, the man was tested on August 15 when he returned to Hong Kong from Spain via the UK. He did not have any symptoms.

Genetic analysis revealed his second infection, which he caught on a trip to Europe, was caused by a different strain of the virus.

It is not clear how he was discovered the second time or if he had symptoms.

Ms Koopmans, also an adviser to the Dutch government, said it is known there are cases where people have been sick with the virus a long time and it then flares up again later.

But a true re-infection requires genetic testing to see whether the two instances of the virus differ slightly. She did not clarify if this had been the case for the Dutch patient.

He had ‘mild symptoms’, according to Mr Van Ranst, but it is not clear which episode of illness he was referring to.

It’s not clear if the Belgian patient’s viruses were put through genetic sequencing to confirm they were different.

March: It was revealed a Japanese man in his 70s tested positive for Covid-19 a second time. He was first infected while on board the coronavirus-ridden Diamond Princess cruise ship in February.

He tested positive two weeks after he recovered and tested negative. It is not clear how many times he had a negative result.

It may be possible someone can test positive for longer than two weeks as their body tries to clear the virus, and the negative result was false.

A Japanese woman was also diagnosed again two weeks after her recovery.

The woman, working as a tour bus guide in Wuhan, where the disease first emerged in December 2019, tested positive on February 26 after a negative result on February 6.

Academics said it was a ‘concern’, but there was too little information to draw conclusions.

Both cases are not known to have had confirmation of second infection with genetic sequencing.

April: South Korean officials feared a group of almost 300 people had been reinfected after the country saw the virus fizzle out.

But later, a senior South Korean official said the flurry of cases were due to a testing fault — and not down to short-lived immunity.

Infectious disease experts revealed that dead virus fragments can remain within the body, possibly for months.

These lingering fragments may cause a positive result, even though the person is not sick or infectious anymore.

Professor Koopmans, of the Erasmus Medical Centre in Rotterdam, said re-infections had been expected but that it left her unnerved.

‘That someone would pop up with a re-infection, it doesn’t make me nervous,’ she said, NOS reports. ‘We have to see whether it happens often.’

Ms Koopmans, also an adviser to the Dutch government, said it is known there are cases where people have been sick with the virus a long time and it then flares up again later.

It has also been noted by scientists that dead virus fragments can remain within the body, possibly for months, and cause a positive test result, even though the person is not sick or infectious anymore.

A true re-infection requires genetic testing to see whether the two instances of the virus differ slightly. It has not been clarified if is the case in either of the European patients — but it was the case for the man in Hong Kong.

The Belgian patient — whose ago also wasn’t revealed — had mild symptoms, according to Belgian broadcaster VRT.

Media cited virologist Professor Marc Van Ranst as the source. According to the broadcaster, he said: ‘It’s not good news.’

She caught Covid-19 for the first time in the second week of March and for a second time in June. No other details about her were released.

Professor Van Ranst, of the Katholieke Universiteit Leuven, said the case shows antibodies the patient developed during the first bout of the disease were not enough to prevent a second case.

However, other scientists have suggested that there is another form of immunity that can prevent severe disease, in the form of disease-fighting T cells.

Professor Van Ranst said it is not clear whether such cases are rare, or whether there are ‘many more people who could have a re-infection after six or seven months’.

It comes after doctors in Hong Kong yesterday claimed to be the first in the world to prove a patient was struck down twice.

A 33-year-old man — who had no known underlying conditions — tested positive for the coronavirus four months after he recovered from his first bout of the life-threatening disease.

Genetic analysis revealed his second infection, which he caught on a trip to Europe, was caused by a different strain of the virus.

The researchers, from the University of Hong Kong, said: ‘This case illustrates that re-infection can occur after just a few months of recovery from the first infection.

‘Our findings suggest that SARS-CoV-2 may persist in the global human population as it is the case for other common-cold associated human coronaviruses.’

Doctors said it was likely immunity is short-lived and that antibodies against Covid-19 fade quickly.

But the unidentified man did not have symptoms of Covid-19 the second time — he was only discovered through screening at an airport. This may suggest he had some level of immunity that protected him from severe disease, experts say.

Paul Hunter, a professor in medicine at The Norwich School of Medicine, University of East Anglia, said: ‘Commentators have been saying for some time that immunity is unlikely to be permanent and may only last a few months.

‘Given the different intensity of the antibody response in people with mild or severe illness and the subsequent decay in levels, it is likely that those with a mild illness will have a shorter duration of immunity than those with severe illness.

‘It is quite likely that subsequent infections do not cause as severe an illness as the first episode because of some degree of residual immunity which may not be sufficient to stop the infection but be enough to reduce the risk of severe illness.’

The overwhelming response to the first report of reinfection in Hong Kong, was that it was a ‘rare event’ and ‘unsurprising’.

All viruses — including SARS-CoV-2, the virus behind the pandemic — mutate over time.

When scientists analyse the DNA of pathogens, they can spot any changes, which can make them weaker or deadlier.

Brendan Wren, professor of microbial pathogenesis, London School of Hygiene and Tropical Medicine, said: ‘With over three million cases of COVID-19 worldwide, the first reported case of a potential re-infection with SARS-CoV-2 needs to be taken into context.

‘It appears that the young and healthy adult has been re-infected with a slight SARS-CoV-2 variant from the initial infection three months previously.

‘It is to be expected that the virus will naturally mutate over time. This is a very rare example of re-infection and it should not negate the global drive to develop COVID-19 vaccines.’

But one scientists said the report from Hong Kong was ‘worrying for several reasons’.

Dr David Strain, a clinical senior lecturer at the University of Exeter and chair of the British Medical Association’s Medical Academic Staff Committee, said: ‘The first, as is laid out in this manuscript, is that it suggests that previous infection is not protective.

‘The second is that it raises the possibility that vaccinations may not provide the hope that we have been waiting for.

‘Vaccinations work by simulating infection to the body, thereby allowing the body to develop antibodies. If antibodies don’t provide lasting protection, we will need to revert to a strategy of viral near-elimination in order to return to a more normal life.’

Professor Andrew Pollard said if reinfections were a problem, it would mean vaccines needed to be adjusted accordingly.

He is director of the Oxford Vaccine Group, which with Oxford University’s Jenner Institute has stormed ahead in the race to find a Covid-19 vaccine, currently trialling their candidate in the last stage of human testing.

Speaking on the BBC Radio 4 Today programme, he said: ‘I think it’s very important in all vaccine development to look at the changes in the virus over time to make sure that if the virus does change, the vaccine is still effective against it.

‘There is a lot of experience doing that with influenza where we have to change the vaccine every year because that virus changes every year.

‘There isn’t so far an issue with the virus changing so the vaccine doesn’t make an immune response against the virus but over time that’s something that has to be monitored very quickly and the international community is aware of that issue.’

Hong Kong researchers insisted their finding does not mean taking vaccines will be useless.

Dr Kai-Wang To, study co-author, said: ‘Immunity induced by vaccination can be different from those induced by natural infection.

‘[We] will need to wait for the results of the vaccine trials to see if how effective vaccines are.’