Washington: After weeks of early and mail voting, at least 69 million Americans have already cast their ballots for next week's election, a historic figure that has upended expectations about election day and which states could decide the presidential contest.

The massive number, which includes voters who have cast ballots either in person or by mail, has stunned election officials and campaign operatives. It equals roughly half of the total turnout in 2016 — all but ensuring, with early voting continuing through the coming weekend, that the majority of ballots will be cast before election day for the first time in history. 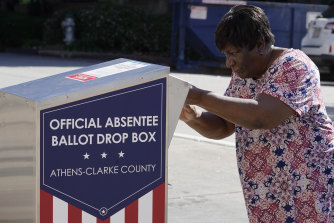 A voter drops her ballot off during early voting on Tuesday AEDT in Athens, Georgia, US.Credit:AP

The overwhelming demand to vote now — which has led to long lines nationwide — reflects a widespread sense of urgency to chart the country's course over the next four years, despite the voting challenges posed by the coronavirus pandemic. And it puts this year's election on pace for a historic rate of participation not seen since the early 1900s.

For now, the early numbers overwhelmingly favour Democrats in 16 of 19 states that provide such data. But the gap between Democratic and Republican voters has narrowed in recent days in several battleground states, and the campaigns of President Donald Trump and former vice-president Joe Biden noted that more Republicans are expected to vote on November 3, election day, than Democrats, according to numerous polls.

The question is how many more.

"The early vote is showing two things: we're clearly headed to record-level turnout, nationally and likely in just about every state," said Tom Bonier, the head of TargetSmart, a Democratic data firm. "And it's clearly showing us that Democrats are highly engaged and will be themselves setting record levels of turnout." 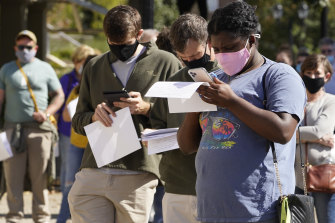 Voters stand in a line as they wait to vote early in Athens, Georgia.Credit:AP

Bonier emphasised that Republicans are also motivated to vote. "The open question," he said, "is whether that level of Republican engagement and enthusiasm can match or exceed [that of] Democrats. That's the part of the equation that we can't solve until election day."

On Monday, Trump campaign manager Bill Stepien told reporters the President would win the election day vote easily, in part because of an extensive get-out-the-vote operation. A person close to the Biden campaign, who spoke on the condition of anonymity to describe internal thinking, said it was "absolutely possible" for Trump to catch up on election day.

As of Tuesday AEDT, the number of ballots cast had exceeded 60 per cent of the 2016 vote in at least 14 states, including Florida, Georgia, Nevada, New Mexico, North Carolina, Tennessee, Vermont and Washington, according to state data and the US Elections Project, which tracks early voting.

Nowhere has the spike been more unexpected than in Texas, where more than 7.8 million voters had cast ballots as of Tuesday morning — more than 86 per cent of the overall vote in 2016 — and where nine counties have surpassed their 2016 totals. Among them: deeply conservative Denton, north-west of Dallas; fast-growing Williamson, outside of Austin; and McCulloch, population 8000, at the centre of the state.

Both parties said excitement was evident in Republican strongholds as well as Democratic ones, making it difficult to glean an advantage for Trump or Biden. A Washington Post average of October polls shows the two candidates about even in the state; Trump won Texas by nine points in 2016.

Fewer than 9 million Texans voted in 2016, out of 19 million voting-age adults at the time — a low turnout rate that Democrats said reflected the apathy of many of their own supporters.

The profiles of voters who have cast ballots early indicate that this year's electorate could look very different from four years ago.

Black voters have turned out in large numbers in key states such as Georgia and North Carolina, citing the need to cast ballots at the first possible opportunity.

New voters have also turned out at a remarkable rate: as of Monday, voters who did not participate in 2016 accounted for 25.6 per cent of early ballots cast nationally, according to a TargetSmart analysis.

And signs have emerged that young voters are on track to sustain the record turnout they displayed in the 2018 election.

The poll found that likely voters in the age group favoured Biden over Trump 63 per cent to 25 per cent.

Likewise, unaffiliated voters have turned out in enormous numbers, said Glen Bolger, a Republican pollster, who said those voters are more likely to decide the presidential outcome than the turnout differential between registered Republicans and Democrats.

"Voters are fired up on both sides," said Bolger. "Yes, I'd rather see more Republicans voting early, but they've been dissuaded from doing that. But there's no indication they're not enthusiastic."

He said he expected overall turnout — the proportion of eligible voters who actually cast ballots — to exceed all presidential elections since 1908.

Our weekly newsletter delivers expert analysis of the race to the White House from our US correspondent Matthew Knott. Sign up for the Herald‘s newsletter here, The Age‘s here, Brisbane Times‘ here and WAtoday‘s here.