Udderly bizarre! Eight-month-old mutant cow with a fifth leg on its back stuns villagers in China

A cow born with five legs has left residents of a Chinese village stunned.

Extraordinary video footage shows the ‘mutant’ cow, now eight months old, standing in a farmer’s house in the province of Shaanxi with an extra limb on its back.

Its owner, Mr Zhao, confessed that he was troubled by the birth of the mutant animal after some neighbours deeming it ‘unlucky’. 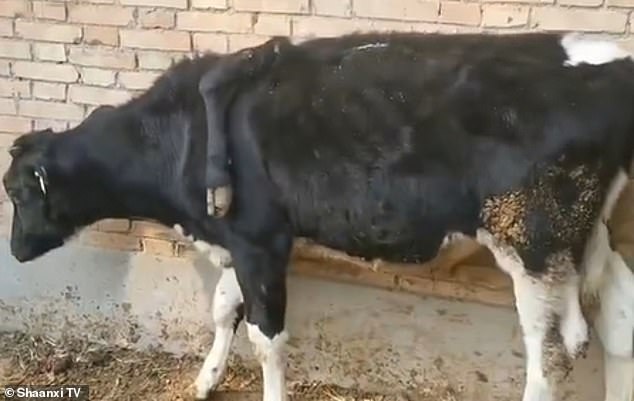 The news was reported by Shaanxi Urban Express, a programme from Shaanxi TV station on Tuesday.

According to the report, the cow weighed around 10 kilograms (22 pounds) when it was born in the county of Sanyuan. 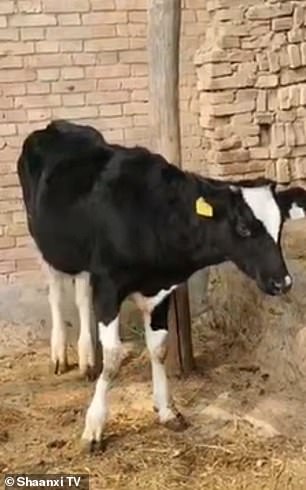 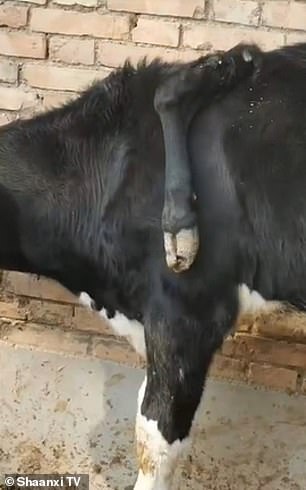 According to a report, the cow weighed around 22 pounds when it was born in the county of Sanyuan, Shaanxi. Under Mr Zhao’s meticulous care, it now weighs around 220 pounds

Mr Zhao told the reporter that the cow’s fifth leg had grown with the animal and could even move when he touched it.

He said he was worried because more and more neighbours had heard about his cow and thought that it spelt back luck.

Liu Beizhan, a local animal husbandry expert, urged the villagers not to panic and explained that the cow had a deformity called polymelia.

Polymelia – in other words, extra limbs – is an extremely uncommon disorder.

A 2002 study estimated that out of every 100,000 cattle born worldwide, fewer than four have extra limbs.