A former St Kevin’s College teacher has been charged with criminal offences relating to his alleged conduct towards a student at the Toorak school.

St Kevin’s principal Deborah Barker wrote to parents on Wednesday to say that the former teacher, Michael Junkovic, had been “formally charged with criminal offences in relation to his alleged conduct with a student during employment at St Kevin’s College”. 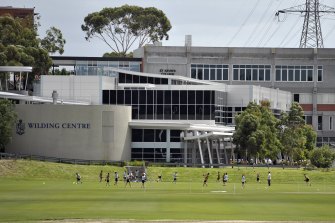 Mr Junkovic worked at St Kevin’s College, a Catholic boys’ school, from 2014 to 2018. His teaching licence was suspended by the Victorian Institute of Teaching late last year.

“In February 2020 a matter concerning Mr Junkovic was reported to the college and in keeping with our policies, the college immediately informed Victoria Police, the Commission for Children and Young People, as well as the principal of Carey Grammar, Mr Junkovic’s most recent workplace,” Mrs Barker wrote.

“Yesterday afternoon, I was informed that Mr Junkovic had been formally charged with criminal offences in relation to his alleged conduct with a student during his employment at St Kevin’s College.”

“By being proactive and transparent in addressing these issues, as painful as it is for us as a school community, we will ensure that we continue to build a safe environment that promotes students wellbeing, learning, faith and fullness.

“We are on a journey as a school community, which will continue, as we address these issues and work to keep our students safe.”

She added that school psychologists and other support were available to students.

St Kevin’s has had a tumultuous few years, with a group of St Kevin’s students condemned as misogynistic for singing a salacious chant about women on a tram in 2019.

The school was then featured in a Four Corners episode. Its long-serving principal Stephen Russell resigned after it was revealed that he provided a brief reference in court for Peter Kehoe, a former volunteer coach at the college who was convicted of child grooming a St Kevin’s student.

John Crowley, former principal of St Patrick’s College in Ballarat, then stepped in as acting principal, before the college appointed its first female head in Mrs Barker, who moved across from Catholic girls’ school Santa Maria College.

In June last year a former counsellor, Maree Keel confidentially settled her case after taking the school to court alleging she was demoted after the school tried to block her attempts to report boys’ complaints of grooming by staff.