Extinction Rebellion strike rush hour in Munich: Climate activists gridlock motorways as they dangle from overpasses in protest against the world’s largest motor show – despite auto bosses putting electric vehicles at the top of the agenda

Extinction Rebellion today struck rush hour in Munich, bringing motorways to a standstill as they dangled from overpasses in protest against the International Motor Show (IAA).

At least two autobahns were shut down as firefighters were called in to remove climate change protesters who were precariously hanging over the roads in harnesses.

At one of the bridges they had unfurled a banner across the side which said: ‘Block IAA.’

Meanwhile, closer to the motorshow a group of Greenpeace activists waded into a pond and held up banners saying: ‘Stop driving climate change.’

Their protest comes as the world’s largest motor show got underway, with electric vehicles and the sustainable future of driving at the top of the agenda.

Volkswagen boss Herbert Diess, who was accosted by Greenpeace activists as he entered the venue on Sunday, is aiming to overtake Tesla as the world’s largest seller of electric vehicles by 2025. 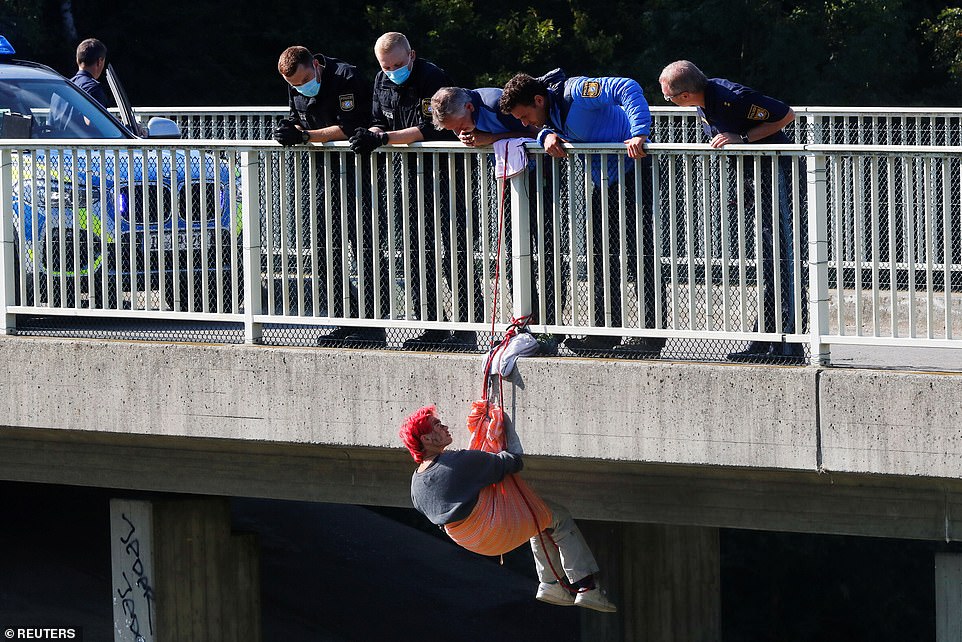 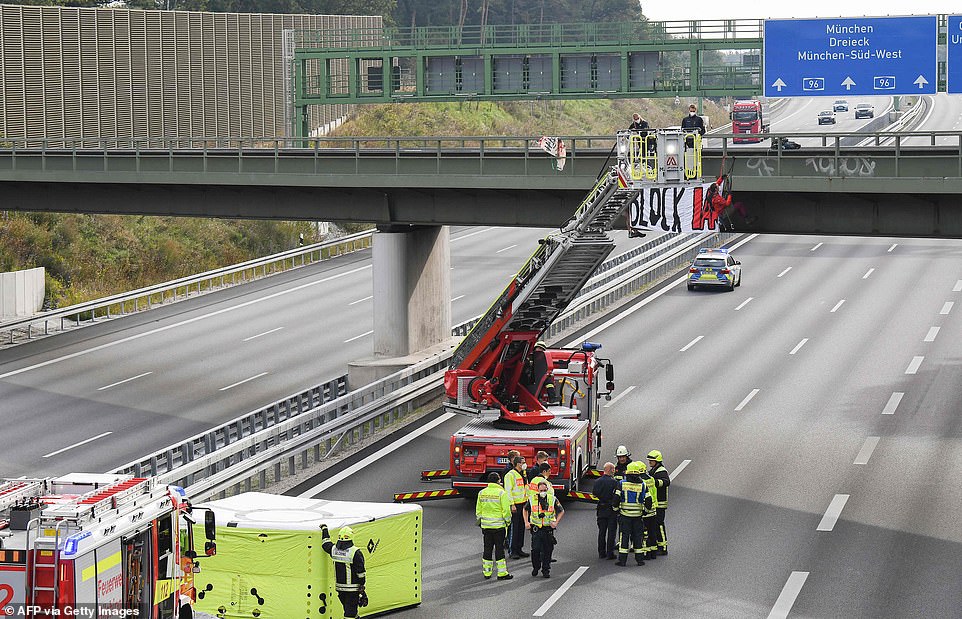 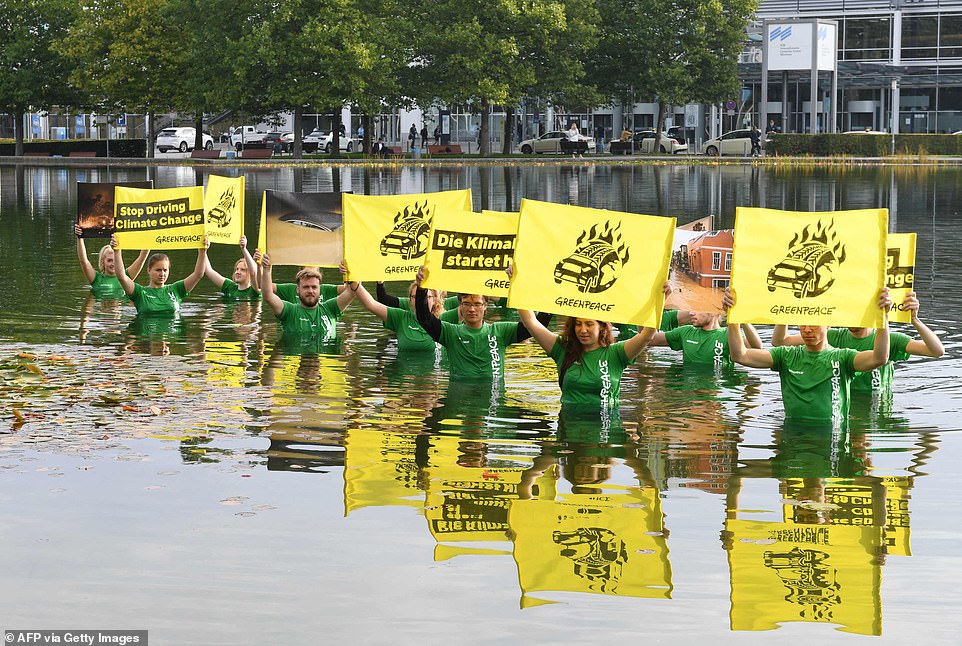 Greenpace activists stand in a pond and hold placards calling ‘to stop driving in order to prevent climate change’ at the entrance of the International Motor Show (IAA) held in Munich, southern Germany, on September 7

The motorshow is welcoming Angela Merkel on Tuesday for the last time in her chancellorship.

But the biennial celebration of all things auto-related is mired in controversy this year as Germany struggles to adapt its flagship industry to the electric and digital revolution.

Merkel, who is quitting politics after an election on September 26, has been a regular at the show over her 16 years in power – even earning the sobriquet the ‘car chancellor’ for her efforts to shield German carmakers from tougher EU pollution rules.

The German leader will give a speech when the fair opens to trade visitors on Tuesday in Munich, a new location as part of efforts to rebrand itself as a ‘mobility fair’ with a spotlight on electric cars.

But there is little chance of the chancellor herself arriving in an electric vehicle, since they make up only 2.4 percent of the government’s 25,000-strong fleet, according to official figures from January.

The figure rises to 5.6 percent when taking into account hybrids and cars that run on clean fuels.

Even so, it is a stark reflection of the blind spots in state support for the German automotive industry, which has received billions of euros in funding in recent years but without any meaningful focus on clean mobility.

The 2015 ‘dieselgate’ scandal spelled the beginning of the end for diesel. That was when Germany’s biggest carmaker Volkswagen admitted to fitting 11 million vehicles with illegal emissions-cheating devices. 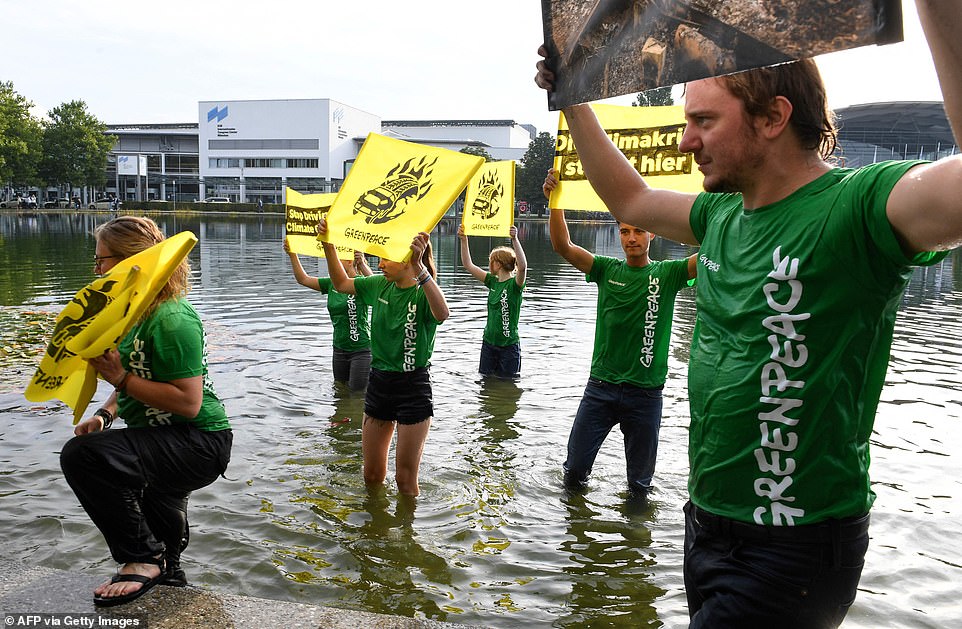 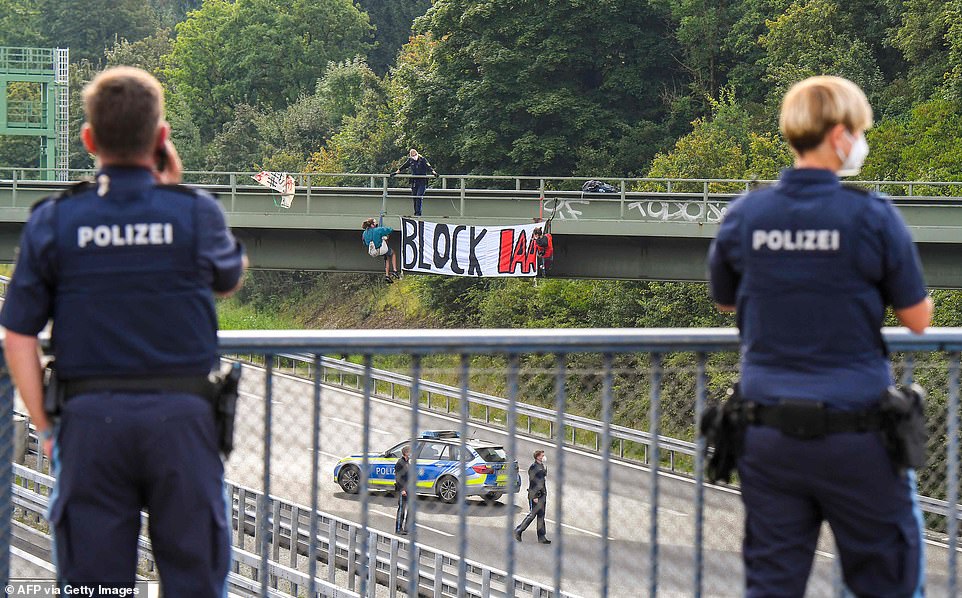 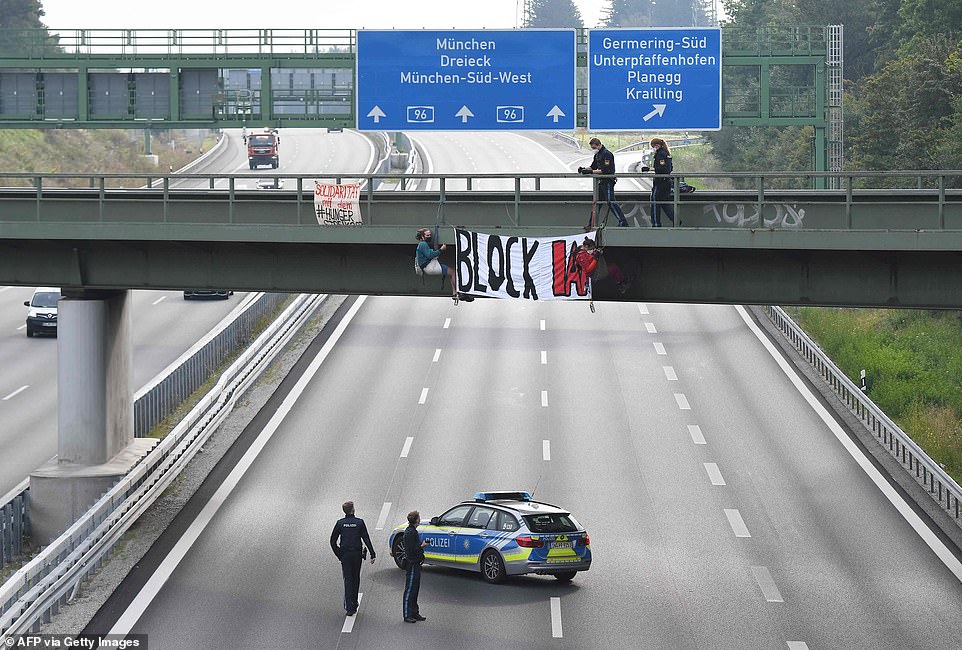 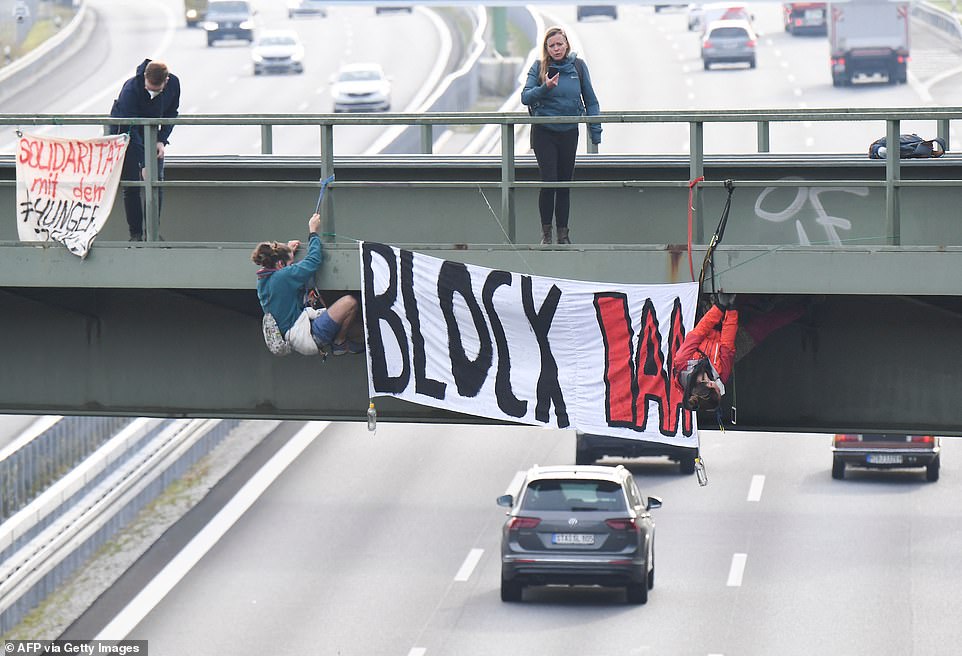 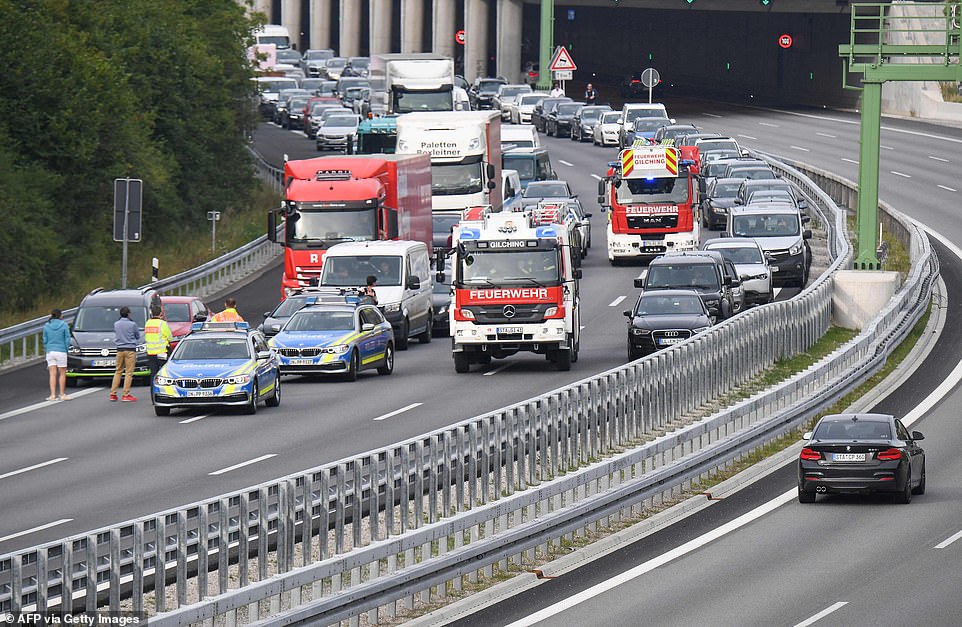 Until then, Diesel was favoured by German and other governments as an efficient and more environmentally friendly alternative to gasoline.

Merkel expressed anger at the scandal.

But in Brussels, her government sought to slow the shift to e-mobility by watering down toughened emissions regulations that German carmakers would struggle to comply with, the Sueddeutsche Zeitung said.

On the eve of Merkel’s visit, the boss of Volkswagen even blamed her government for slowing down the electric revolution by incentivising diesel engines even after his company was seeking to make the switch following the emissions scandal.

‘A car company cannot do this transition (alone) because you need the right environment,’ Volkswagen chief executive Herbert Diess told AFP in an interview. ‘If you keep diesel cheap… nobody will buy an electric car, it’s impossible,’ he said.

Ferdinand Dudenhoeffer, director of the Center for Automotive Research at the University of Duisburg-Essen, called the government’s diesel strategy ‘depressing and incomprehensible’.

‘The state fuelled a diesel boom through tax breaks, and now diesel passenger cars are practically unsellable,’ he told AFP.

‘Scrappage schemes, incentives to buy electric cars, subsidies for battery production, aid for recycling, short-time working allowances – this has been the strategy for 16 years. This alleviates short-term economic problems, but does not build a new structure,’ Dudenhoeffer said. 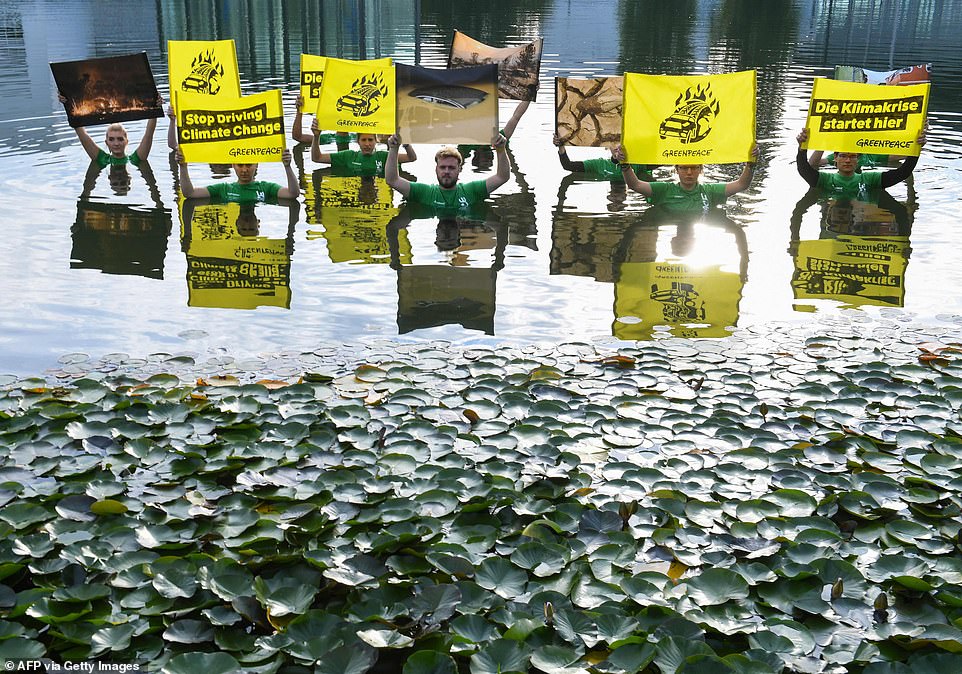 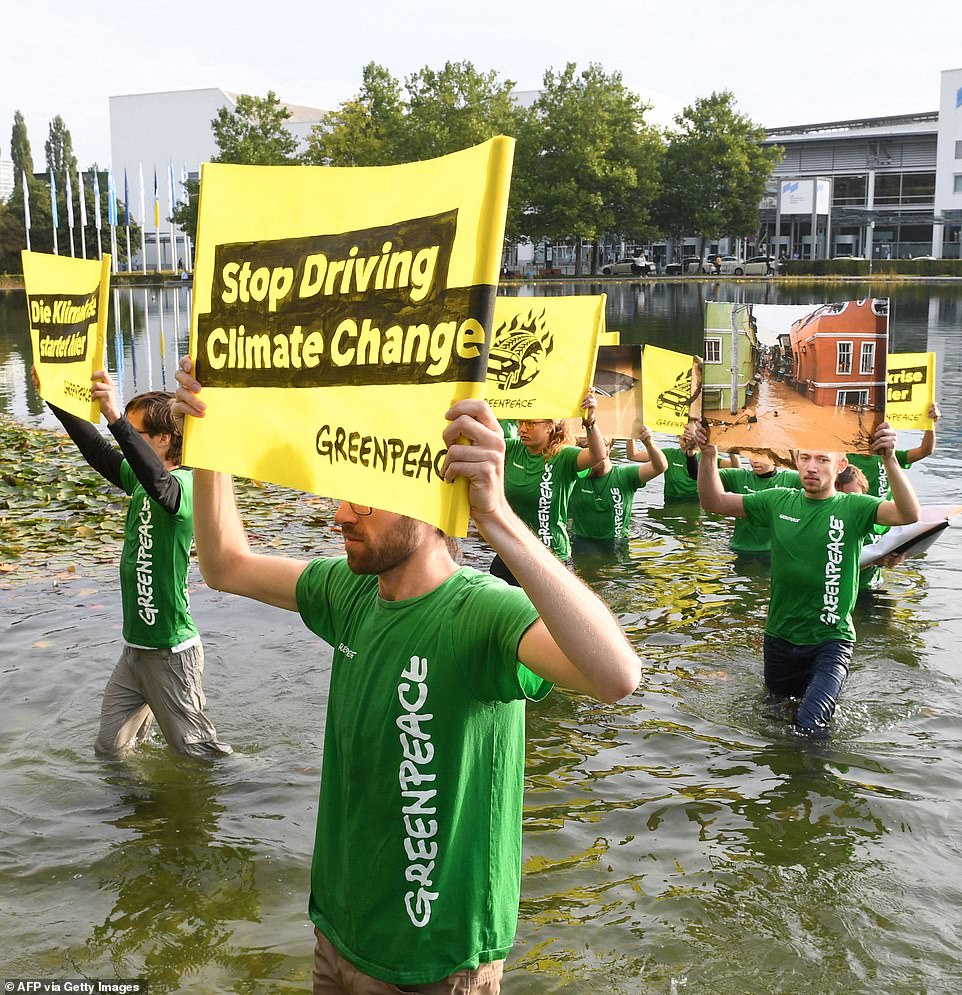 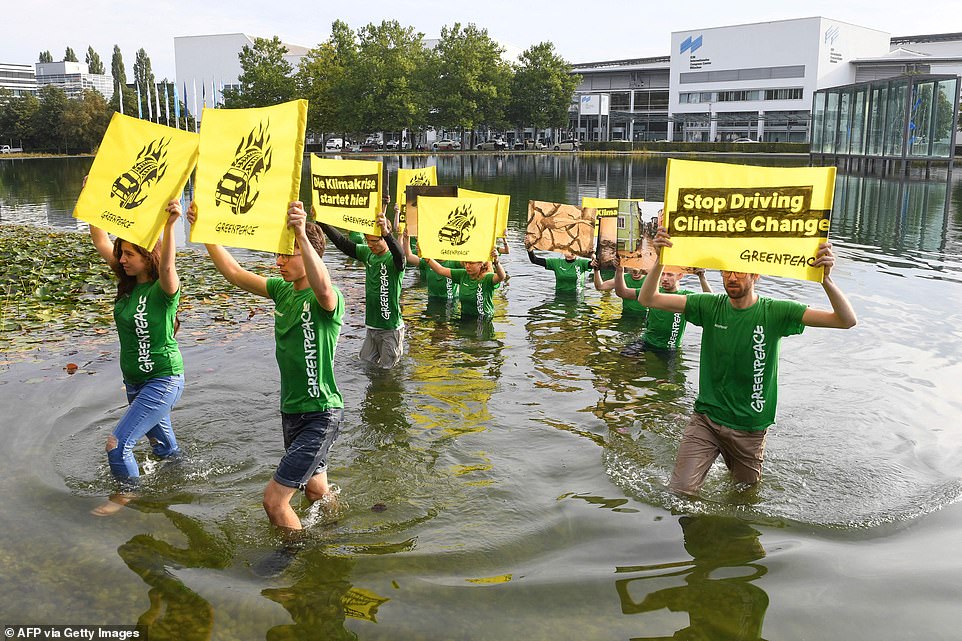 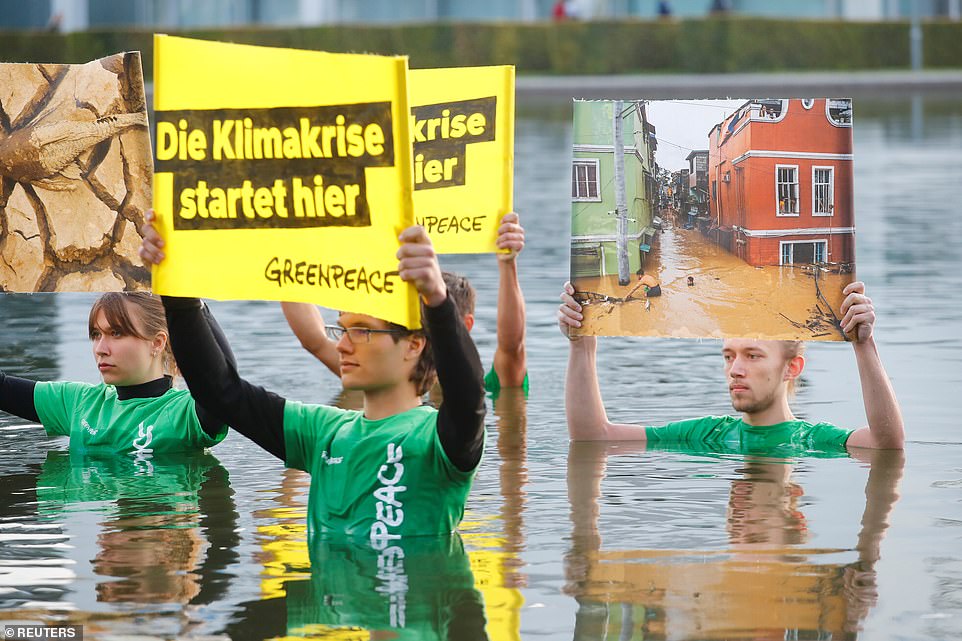 ‘The government has had to balance short-term economic concerns with the interests of industry and the unions,’ he said.

Merkel’s government has always treaded gingerly because of the 800,000 jobs at stake in the industry.

But the Sueddeutsche Zeitung lamented in August that ‘with her overly generous attitude towards the car industry, the chancellor has helped neither the companies nor the country in the medium term’.

‘Valuable years have been lost in the battle to phase out the combustion engine,’ it said.

With the momentum for greener mobility growing, and with tougher anti-pollution guidelines in place, Germany’s car manufacturers are now no longer able to put off the inevitable.

The decline of the combustion engine is proving to be an existential crisis for the car industry, which accounts for more than 12 percent of jobs in the industrial sector in Germany.

While Germany’s large manufacturers have the resources to weather the transition, the ecosystem of equipment manufacturers and smaller businesses in the supply chain may not be so resilient.