Family of three in hotel quarantine complain of 'inhuman' conditions

Family of three who got stuck abroad for three months after taking a week’s February holiday to Dubai complain about ‘inhuman’ £3,000 hotel quarantine after 10,000-mile voyage

A family of three who got stuck abroad for three months after taking a 10-day holiday in February to Dubai have complained of the ‘inhuman’ conditions of a £3,000 quarantine hotel.

Shabana Shah and her children Rida, 15, and Raiyman, 20, left Britain on February 14 for the getaway but after a series of flight cancellations and a 10,000-mile voyage, only arrived back home today.

She then booked flights home via Turkey on March 15, but her daughter became ill and was too sick to fly. 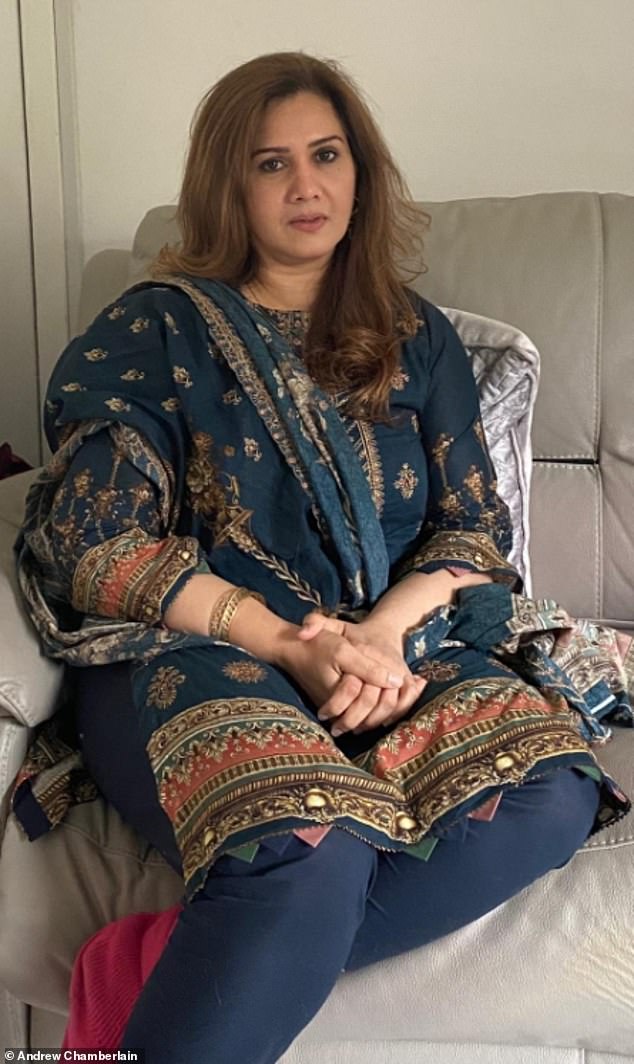 Shabana Shah (pictured) and her children Rida, 15, and Raiyman, 20, left Britain on February 14 for the getaway but after a series of flight cancellations and a 10,000-mile voyage, only arrived back home today

Ms Shah then arranged new flights for April 15, but tested positive for Covid and had to isolate.

She managed to secure three seats on a plane flying to Heathrow on May 4, but had to scrap her plans because all the quarantine hotels were full.

So she decided to divert to Instanbul, in Turkey, where she had to stay in the country – then on the UK’s travel green list – for 10 days before being allowed to fly back to the UK.

The government then added Turkey to the red list on May 7, forcing the trio into a quarantine hotel in Luton when they finally touched down on May 15.

Ms Shah, from Rochdale, Greater Manchester, said: ‘It has been a terrible ordeal. I have been away for over three months. I never thought this would happen. 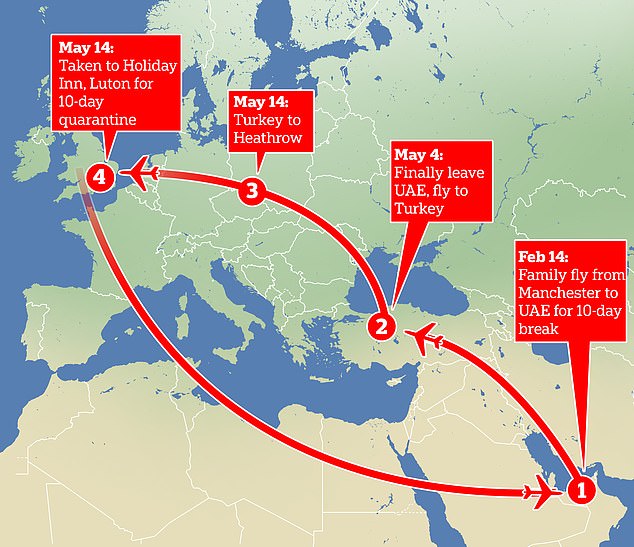 ‘With covid and being in lockdown, it had been a terrible year. My children and I were all really depressed and I thought getting away would be a great lift for everyone.

‘That’s why we decided to get away. We’d only been in Dubai a few days when I received an email from the airline saying the flight had been cancelled.

‘I kept calling and calling to see when flights would be running again and was told ring back.

‘This went on for weeks so I decided to look for alternative flights.

‘We found some going to via Turkey but my daughter became ill and it would have been too much for her.

‘Then I tested positive for covid while still in Dubai, which delayed us again.’

Ms Shah said being stranded in Dubai and her stay in Turkey cost her around £7,000.

She added: ‘It has cost me a lot of money. I was only supposed to be away for 10 days and I’ve been away for months. It has been very traumatic.’

She said the worst aspect was her stay in the Holiday Inn Express at Luton Airport.

Ms Shah said: ‘That was just awful. We were all in one tiny room and the food was awful.’

When Sabana complained to hotel staff about the conditions, she was told to contact Australian firm Corporate Travel Management (CTM) Ltd, which has the contract with the government. 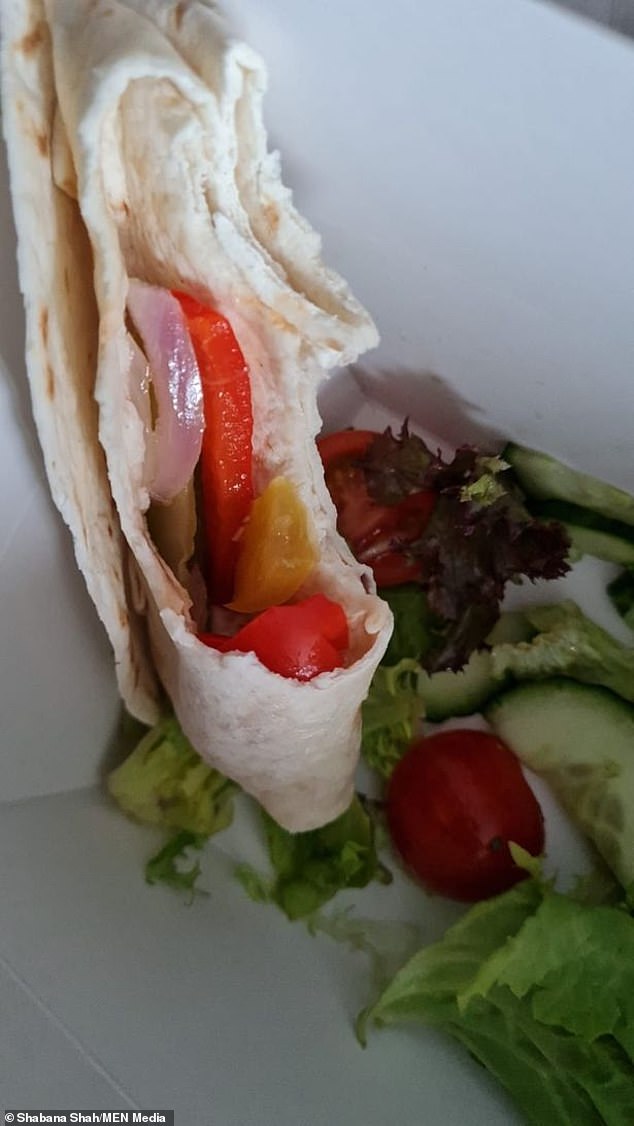 She said the worst aspect was her stay in the Holiday Inn Express at Luton Airport. Ms Shah said: ‘That was just awful. We were all in one tiny room and the food was awful.’ Pictured: Food at the hotel

She said: ‘They were just blaming each other and were just playing games.

‘We were in there for 10 days and nothing was done.

‘We were treated really badly.’

Shabana took a taxi from the hotel – costing £180 – arriving home at 5am today.

She added: ‘We left as soon as we were allowed. I wasn’t spending another minute in that place.’

The Shah family were put in a ‘family room’ at the Holiday Inn at a total fixed cost of £3,050.

Australian firm Corporate Travel Management (CTM) Ltd was awarded a contract by the Government to manage quarantine hotel stays for Brits returning from countries on its ‘red list’.

Pictures show two double beds have been squeezed into a single room to accommodate the three of them. 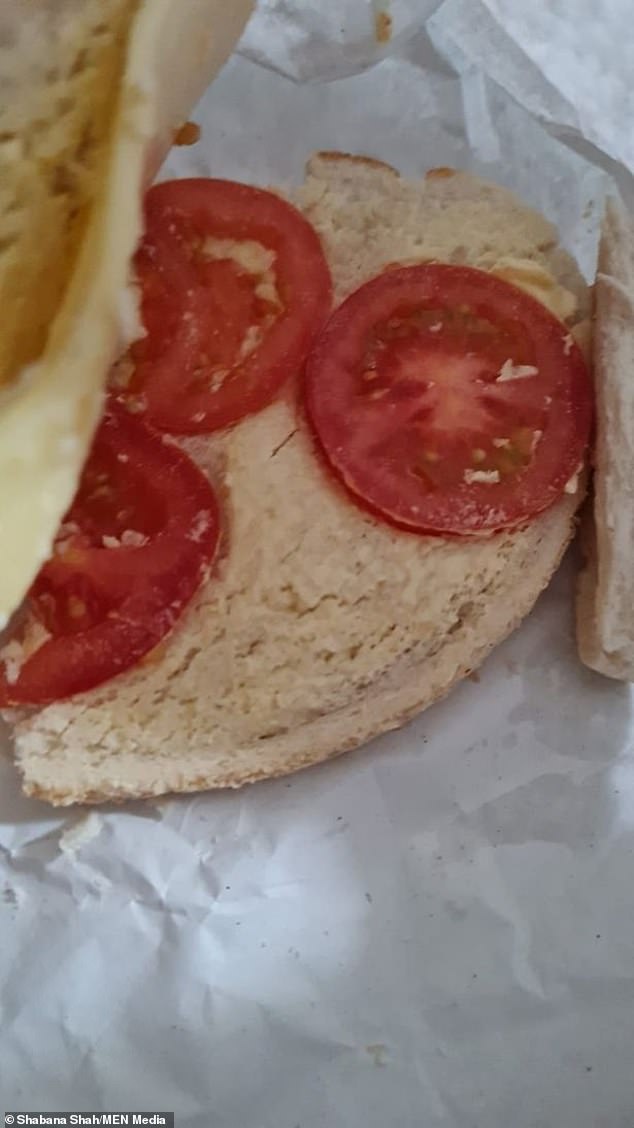 When Sabana complained to hotel staff about the conditions, she was told to contact Australian firm Corporate Travel Management (CTM) Ltd, which has the contract with the government. Pictured: Food at the hotel

With luggage taking up what little floor space that is left, the trio have been forced to climb across a bed to get to the bathroom.

It is understood they could get an additional room at a further cost of £650 but have declined.

They family said they were permitted to leave for fresh air for only 15 minutes at a time.

The hotel brought them breakfast, lunch and dinner which was to be eaten in their room each day – but the Shahs complain it was poor in quantity and quality and they’ve been forced to spend more money on takeaways.

Ms Shah said: ‘If we want to go out we have to ask permission. They take us out for 15 or 20 minutes.

‘It gets very claustrophobic in the room. The room is so tiny we have to climb over the bed.

‘They bring us breakfast, lunch and dinner but it is not enough food for an adult.

‘It’s like a bit of bread with tomatoes, couscous which was cold. It is horrible.

‘My daughter has not left the room at all, she is 15 and I’m really worried about her.

‘I’m really upset with how they have treated us.’ 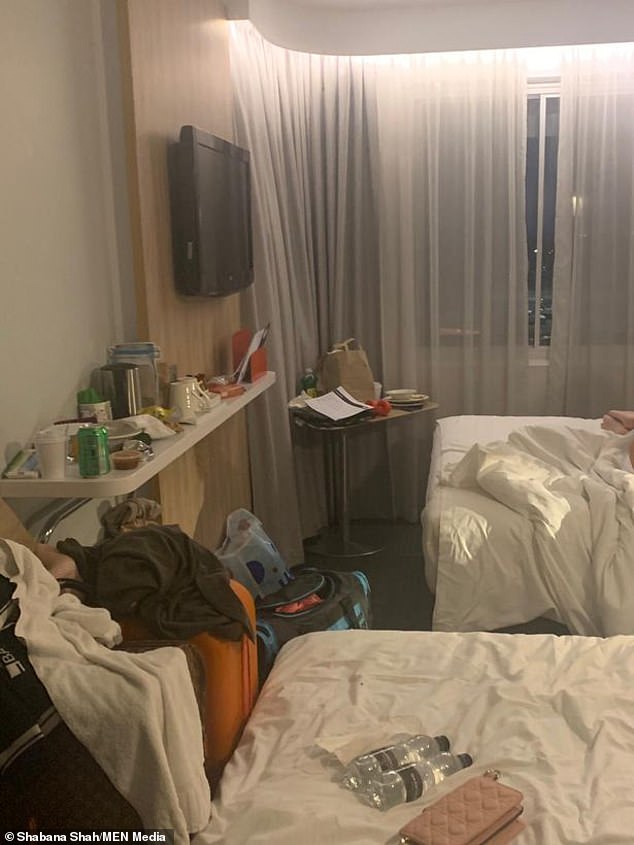 In an email she sent on 17 May, Shabana wrote: ‘Why do me and my kids have to suffer? Saying sorry is not going to make it easy to stay here.

‘I request you all come and live here and see how horrible the state of it is, I cannot believe of you all being so inhuman.’

A spokesperson for IHG Hotels and Resorts, which owns the Holiday Inn Express brand, said: ‘We are unable to share any comment as the approach to quarantine is a matter for the DHSC (Department for Health and Social Care).

‘We would recommend liaising with the relevant Government media team who will be able to guide you on this.’ 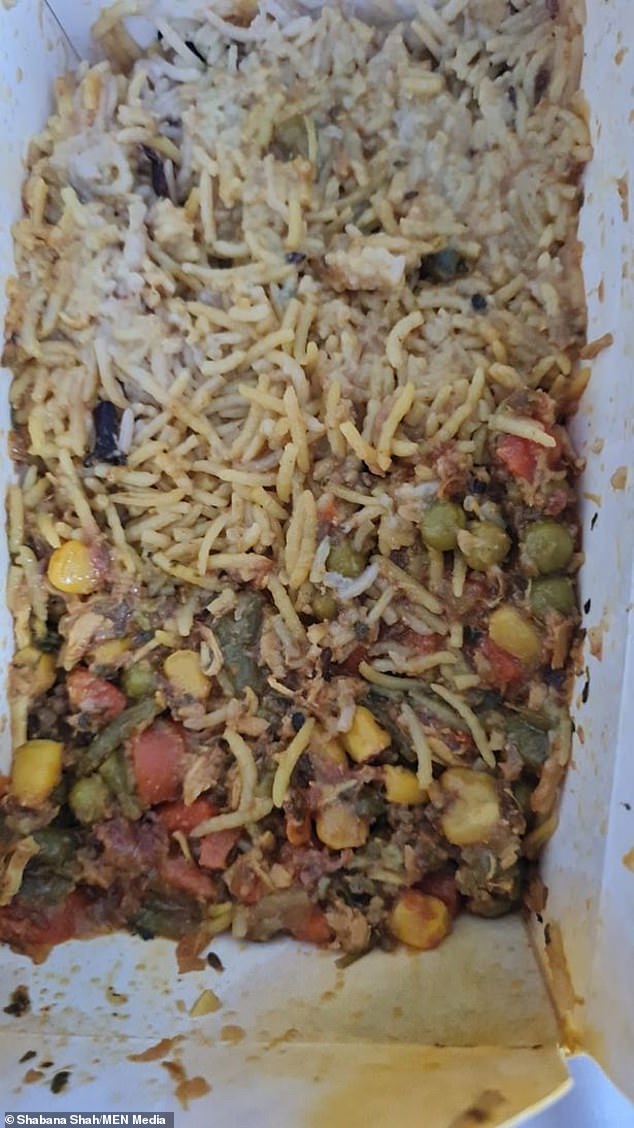 Pictured: More of the food the family were provided with by the Holiday Inn in Luton

A DHSC spokesperson said: ‘Our top priority has always been protecting the public and our robust border regime is helping minimise the risk of new variants coming into the UK.

‘The Government continues to ensure every person in quarantine gets the support they need, and all managed quarantine facilities are accommodating the vast majority of people’s requirements.

‘Hotels do their utmost to take any necessary steps to address concerns raised by guests.’

A spokesperson for CTM said: ‘CTM’s role in the UK Hotel Quarantine Programme is to facilitate bookings between citizens returning to the UK and participating hotels, within the guidelines provided by the UK DHSC.

‘While service standards are the responsibility of each hotel, we take on board all feedback from people entering hotel quarantine and we have a robust complaint management process to share the feedback with hotel teams.

‘We escalate concerns raised with us to hotel management and security providers in order to resolve any issues in a timely manner.

‘We also provide ongoing feedback to DHSC and the participating hotels to enable continuous improvements to the quarantine programme.’