Home » Farmer, 72, struggles to walk after MASSIVE hernia grows on his stomach as he's left waiting months for surgery

Farmer, 72, struggles to walk after MASSIVE hernia grows on his stomach as he's left waiting months for surgery

A FARMER is struggling to walk due to a massive hernia growing on his stomach.

Winston Baldwin, 72, has been waiting more than two years for surgery and "hasn't been able to do anything" due to the horrific "pain and distress". 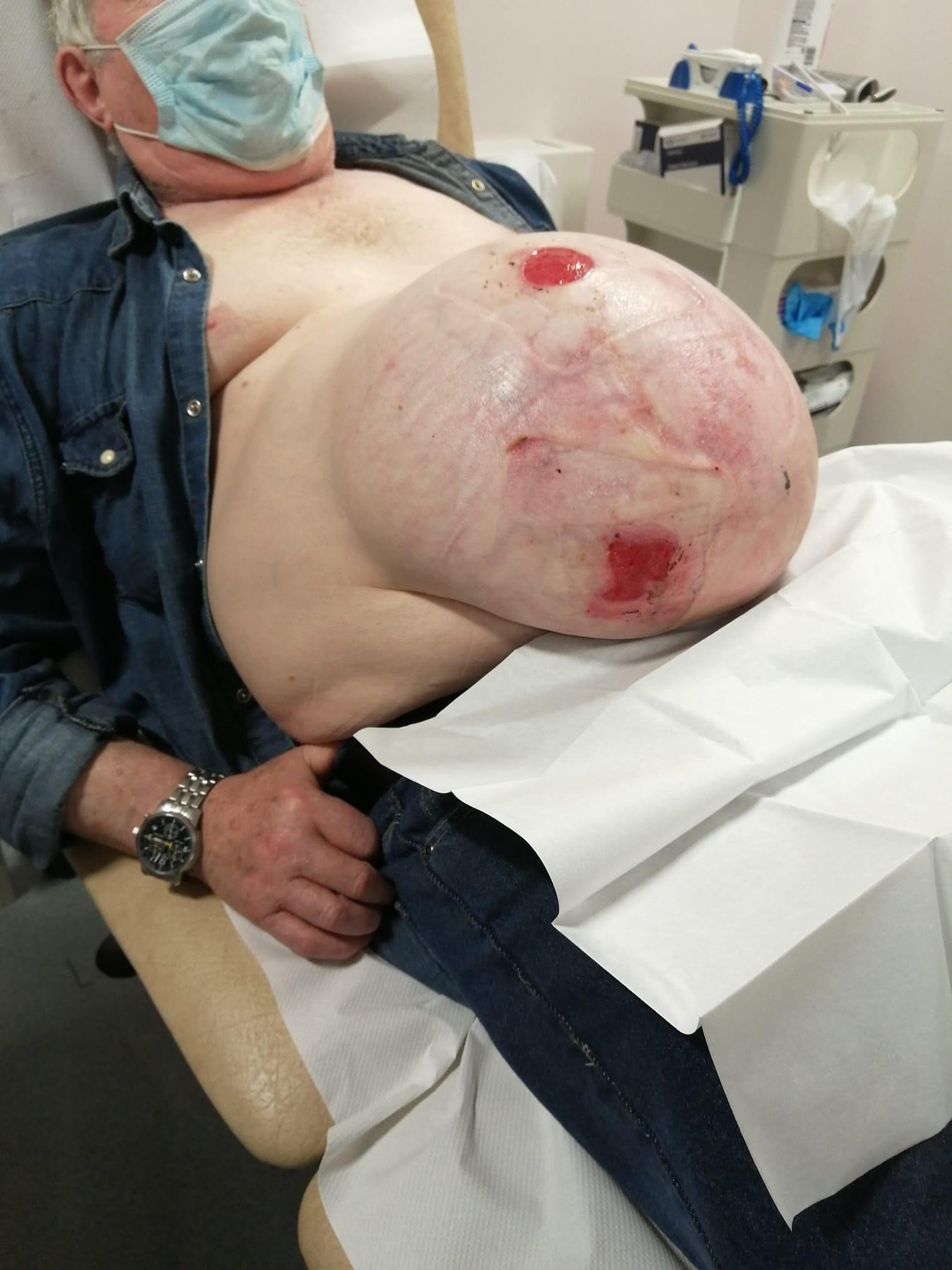 The pensioner, from Alsager, Cheshire, had bowel surgery in April 2019 but started developing a hernia in the months that followed.

This has now expanded so much he is often left "breathless" and finds it almost impossible to do simple tasks such as walk.

It is so big Mr Baldwin also can't work, write or even drive without it getting in the way.

The former teacher said he feels as though he has been "fobbed off" by the hospital as he has still not been given a date for surgery to have it removed.

He told CheshireLive: "I'm living on a little farm, but I've not done any farm work.

"If my cows came to somebody else's field I have to ring somebody up to get them back.

"I can walk to my car, but that's about it. I'm doubled up if I walk quickly.

"My airways, everything is wrong, including it's pressing on my bladder as well, so I want a wee and I can't have one. Those are the constraints of the hernia." 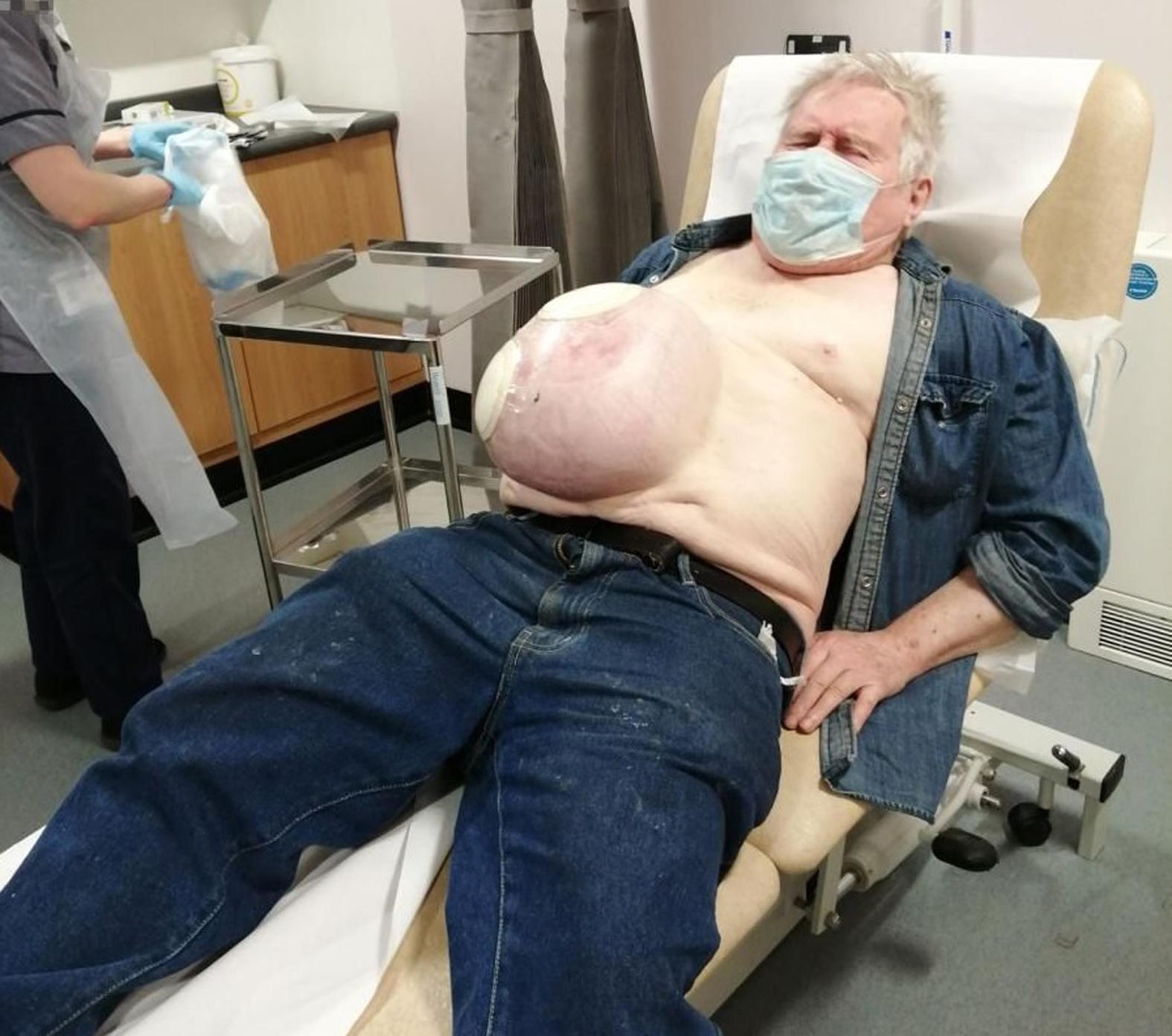 He added: "I don't want to reach a stage where they say 'well it's too dangerous to do it, here's a nice zimmer frame, s** off'.

"I don't want that. It's still growing. It's uncomfortable. It's dangerous. I'm breathless most of the time. I just find walking difficult.

"I can just about drive, but it's touching the steering wheel. I'm wearing a corset. I'm not a happy bunny."

Mr Baldwin said he finally had a consultation at the hospital on May 12 but he still doesn't have a date for his surgery – which could now take up to three hours as the hernia is so large.

He added: "It was like vaguely 'we'll sort you'.

"No date was given, and then of course Covid became the prima facie excuse for not doing operations en masse or whatever and that was it.

"So for what would of been an hour's operation may take three hours now and my recovery will be a lot longer. A stitch in time saves nine.

"I thought when I went in last Wednesday it would be get back in tomorrow and we'll do the operation, but I just seem to be fobbed off.

What is a hernia?

A hernia occurs when an internal part of the body pushes through a weakness in the muscle or surrounding tissue wall.

It usually develops between your chest and hips.

In many cases, it causes no or very few symptoms, although you may notice a swelling or lump in your tummy (abdomen) or groin.

The lump can often be pushed back in or disappears when you lie down.

Coughing or straining may make the lump appear.

There are several different types of hernias; inguinal; femoral; umbilical; hiatus; and other less common types.

See your GP if you think you have a hernia. They may refer you to hospital for surgical treatment, if necessary.

You should go the accident and emergency (A&E) department of your nearest hospital immediately if you have a hernia and you develop any of the following symptoms:

These symptoms could mean the hernia has started to cut off blood supply to an organ or surrounding tissue, or a piece of the bowel has entered the hernia.

Mr Baldwin said he "doesn't wish to knock the surgeon too much" but he has "no quality of life".

"I can't work, I can't write anymore, I can't do anything because of the pain and the distress I have permanently."

A spokesperson for Mid Cheshire Hospitals NHS Foundation Trust said: "We are unable to comment in detail about individual patients due to confidentiality reasons but would like to emphasise that we take any issues raised regarding a patient’s care very seriously.

"We are currently looking into this matter and will continue to liaise with Mr Baldwin directly about his ongoing care and treatment.

"In the meantime, we would like to apologise for the delays experienced during what we appreciate has been a worrying time."

They added: "Throughout the pandemic we have continued to provide urgent and cancer treatment, but high levels of Covid-19 activity unfortunately resulted in delays for routine planned care, which we apologise for.

"Now that that number of coronavirus cases has reduced, our staff are working hard to restore services and safely treat patients as quickly as possible according to clinical need."