Victoria Police's first female Assistant Commissioner for Family Violence has vowed to fight domestic abuse committed by police employees and to remove barriers to women in the force. 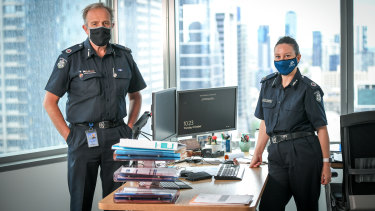 The daughter of a Latrobe Valley detective will make boosting gender equality a top priority, as "gender inequality lies at the heart of violence against women". Family violence accounts for 40-60 per cent of front-line policing work.

Ms Callaway, who at nearly 50 is also the youngest person put in charge of the key command, said she was drawn to the role by her own experiences, having lived through tough times in the wake of her parents' divorce and faced gender-based obstacles at work.

"My approach to family violence, gender equality and protecting our most vulnerable … does not come from the position of an interested spectator – I have lived experiences both personally and professionally that have shaped my life, informed my values and driven my career choices," she said. 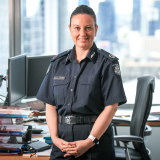 Lauren Callaway is the first woman Assistant Commissioner, Family Violence and is determined to fight precursors to violence and coercive control, including gender inequality.Credit:Eddie Jim

"I grew up in a family that separated in the 1980s which was a time when many things that happened were labelled under the one descriptor of 'unhappy marriages'. Those immediate years afterwards were extremely difficult from an emotional and financial perspective."

She credits her resilience to those years and says gender-based hurdles in her 26-year policing career showed her women are still at a disadvantage. "Every time I went for a promotion I was appealed [challenged] only by men.

"When you start unpicking the systems, the inherent assumptions, the culture and practices of how women are treated in the workforce, you uncover evidence that the `way things are around here’ is actually unfair," she said.

Ms Callaway "never used the word feminist in the past, but have come to the realisation that I probably am", and believes the way to advance gender equality within Victoria Police is to get men to understand if women are promoted they are not losing out.

"[It] lies in convincing our male colleagues of the organisational benefits of having gender equality, fairness and heightened levels of respect and inclusion in our workforce.

"The challenge will be addressing men’s sense of loss, or what they perceive they may lose, which is interesting when that very same loss or missed opportunity has been something police women have been accepting for years."

The promotion of more women to senior ranks in recent years is linked with significant reforms Victoria Police is achieving in family violence, sexual assault, child abuse and other aspects of community safety, she said. But there is still a strong need for more women in policing (currently 34 per cent, including just 20-30 per cent of members ranked superintendent or above).

Since the damning findings of a 2015 review by the Victorian Equal Opportunity amd Human Rights Commission to examine sex discrimination and sexual harassment including predatory behaviour within Victoria Police, the organisation had committed to "life changing" reform, Ms Callaway said.

Mr Curran said he had noticed women having a harder time being promoted in the force.

"I am the last person to appropriate the stories of the women in his life, but my sister's career is the one I admire most; [Jacqueline] has worked in the rape squad and the homicide squad and at every turn it was so much more difficult," said the now Assistant Commissioner.

He will work to stamp out discrimination against and harassment of women, and also family violence perpetrated by those in the organisation.

"Changing the culture is the sharp end; dealing with predatory behaviour, dealing with appalling behaviour some of our members have engaged in and the damage that's occurred.

"The other important piece is to deal with cultural issues and structural issues which mean we don't have enough women coming through," he said.

"The good news is just as with the community, the majority of people are on board and do agree this is the right thing to do. We have a minority that's very strong, not unlike the broader community, they're absolutely wedded to what they believe is the idea [they are] the keepers of the flame.

"It's about trying to educate those that can be educated but also identifying the behaviours that are beyond the pale. Cultural change is incredibly difficult," he said.

The world's largest inquiry into workplace sexual harassment found that between 2010 and 2015, 477 respondents said they had been sexually harassed by colleagues, with up to 10 saying they were victims of serious sexual assaults, including rape.

At the time, women in senior roles were rare: "When I became a superintendent in 2016 there were only three other women at that rank, out of a cohort of almost 100 police officers – and I am pleased it is significantly different today," said Ms Callaway.

"I could not accept back then that only four of us deserved to get to that position – when it is exactly those roles that are needed to influence and drive culture change."

Tania Farha, CEO of Domestic Violence Victoria told The Sunday Age she welcomed Ms Callaway's appointment: "In particular, we welcome the promotion of a woman with such relevant experience to such an important senior role within Victoria Police."

One of Ms Callaway's first moves was to create an interdepartmental committee with Assistant Commissioner Tess Walsh, recently appointed to head up professional standards, and Brett Curran to address ongoing issues with family violence committed by force employees.

"We conducted a review into family violence committed by employees in 2018 and it did reveal some trends within that space. We are not operating at levels consistent with community expectations with regards to reporting incidents in the first place – they are highly under reported," she said.

Confidence in responses to complaints about abuse by a colleague needed to improve, especially since many within the organisation are partnered to others who work in it.

"If I put myself in the shoes [of an affected family member who works at Victoria Police] how confident would I be to come to work and declare family violence had occurred in my private life?

"There is humiliation and embarrassment to it, all the things that play out in the community around judgment and choices would equally happen in Victoria Police. If your partner is also a colleague … it would be an extremely difficult barrier to get over.

"We have a responsibility and commitment to make reporting and our responses as victim-centric as possible."

Some aspects of Operation Ribbon, in which family violence detectives checked in on perpetrators and victim-survivors at high risk during lockdown, would be retained as it had produced results.

Ms Callaway expects December's crime statistics to show a greater increase than the 7.4 per cent increase in family violence offending identified in September figures, because there is a three-month time lapse in reporting.

Even so, she is not sure new laws around “coercive control”, a form of abuse those eventually killed by their partner often experience, will be pursued in Victoria.

Some states are considering laws around controlling, non-physical forms of abuse following the murder of Queensland woman Hannah Clarke and her three children aged six and under by Clarke's controlling estranged husband, Rowan Baxter, in February. But in Victoria advocates believe such laws could be manipulated to be used against victims. 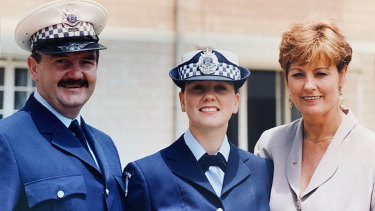 Lauren Callaway as an academy graduate with her parents Liz and sergeant John Callaway.

"Coervice control is very topical at a national level … and in Victoria it is topical with the sector. My position is we are interested in the conversation. One thing that is important about that is it forces you to look beyond the assault element and focus on the vulnerabilities of the victim which have been specifically targeted by the perpetrator.

"I am not convinced that [the offence of] stalking adequately conveys the abuse or coercive control elements. We see survivors who have all elements of abuse in their background, and I'm not sure there's anything right now that actively captures that experience and deals with it."

As the community grapples with stubbornly high levels of violence against women, Ms Callaway believes "the time is right in policing to speak very plainly".

"The more conversations we have about gender equality the more educated we become about what is holding us back from progress."