There was a time when Victoria’s Chief Health Officer Brett Sutton appeared to be looking forward to the inquiry into the state’s hotel quarantine debacle so he could get a few things off his chest.

Now, you would not blame the man for feeling Justice Jennifer Coate’s investigation cannot wrap up its work soon enough. 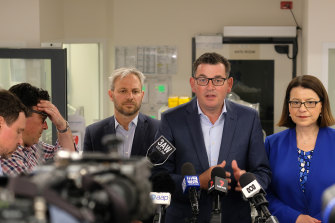 But this quarantine inquiry is a lot like the state's second wave. It keeps going and going and the government is partly responsible for that.

The end of the line got even further away after Tuesday’s "extraordinary sitting" of the Board of Inquiry.

If the Department of Health and Human Services had just handed over the emails, seen by Sutton in the early days of the program and clearly canvassing the use of private security, when it was asked for all relevant documents, things would have been a lot simpler.

The Chief Health Officer could have been questioned about their contents, which contradict his evidence that he did not know private security was being used in the hotels until he read media reports in May, when he testified last month.

It would not have been a great look.

But being asked for a "please explain" sworn affidavit from the inquiry appears a whole lot worse for the figure who emerged as Mr Trustworthy during Victoria's pandemic ordeal and worse again that Sutton was made aware of the emails in late September and would not support them being supplied to the inquiry.

Sutton will provide the same explanation to the Board of Inquiry as he offered to the media – that he was a very busy man back in late March and early April and he failed to register the vital details about private security in the emails.

Jennifer Coate will then decide if she accepts that explanation.

If she does, the retired judge will then go on to ponder just how the state’s Chief Human Biosecurity Officer, another one of Sutton’s jobs, manages to miss that detail at least six times in about two weeks.

It’s ironic for Sutton, the man who led the health response that brought the state back from the brink of an out-of-control coronavirus second wave – something that has not been done anywhere else in the world – to find himself under this sort of pressure.

But that’s where we are and after the resignations of both health minister Jenny Mikakos and the state’s top public servant Chris Eccles as a result of this inquiry, we can’t discount the possibility that Sutton is in strife.

He’s not showing any sign of going anywhere and he still has the Premier’s backing, something that both Mikakos and Eccles lost before they jumped, but Sutton needs this inquiry to wrap up without him being drawn into any more dramas.

The health department’s performance in handing over evidence and the inquiry’s very late request for telephone records of key players is also going to have another knock-on effect.

Anyone who doesn’t want to accept Jennifer Coate’s findings will have plenty of material to work with.

So even when it’s over, this won’t be over.