A four-year-old girl was diagnosed with a rare, fatal disease likened to childhood dementia last week.

Adelei Clarke from Swindon’s first symptoms of Batten’s disease were innocuous enough, seeming to be a little clumsy and daydreaming regularly.

But after suffering her first seizure in May this year, Adelei’s parents David, 35, and Hayley, 36, were devastated to find out she could die before she turns 10.

The disease will also cause her to lose her sight and she could forget who her parents are by the end of the year. 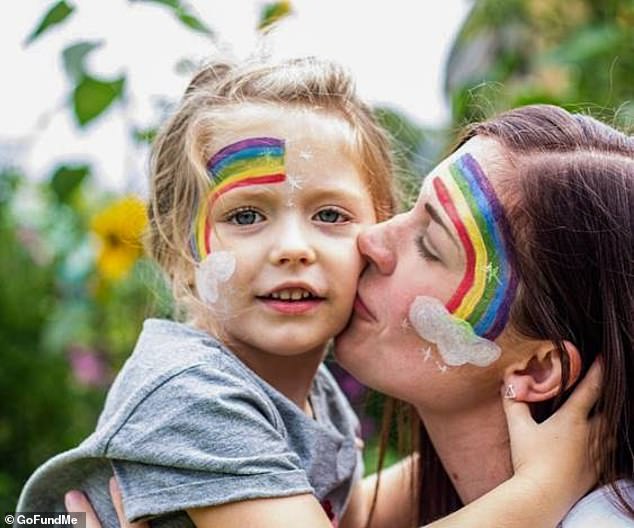 Adelei Clarke, four, from Swindon, has been diagnosed with fatal Batten’s disease and will likely die before she reaches the age of ten 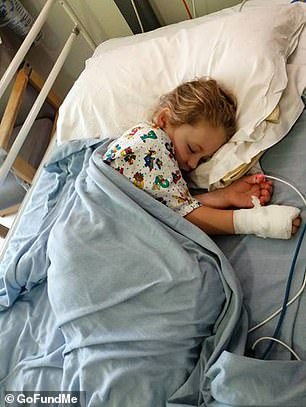 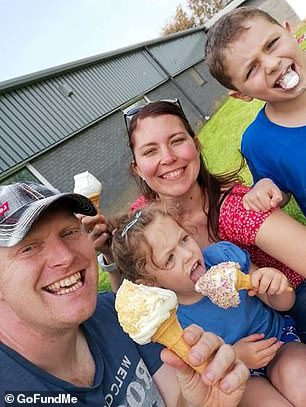 Her parents David, 35, and Hayley, 36,  and brother Samuel, seven, (right) were devastated to find out she would lose her memory and go blind in the next few years. Battens disease has been likened to Alzheimer’s due to its degenerative effects

Youth worker David said: ‘When Addy’s symptoms first started, we just thought she was just daydreaming. The lights would be on but nobody would be home.

‘She’d fall over and we wouldn’t think anything of it beyond “she’s clumsy”.

‘She didn’t learn to talk at a normal rate so we took her to a speech therapist. They just said she was one of those kids who wouldn’t stop talking once she grew up.

‘But there would be times when other people would say things – the first time we really considered the possibility that something could be wrong was when her grandparents said she looked unusually vacant. 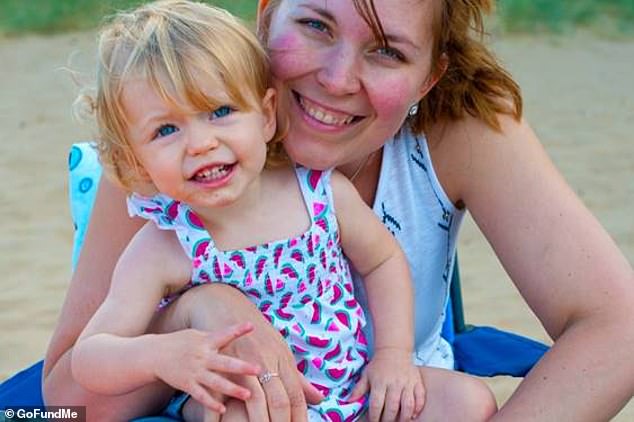 Adelei’s first symptoms of Batten’s disease were innocuous enough, seeming to be a little clumsy and daydreaming regularly 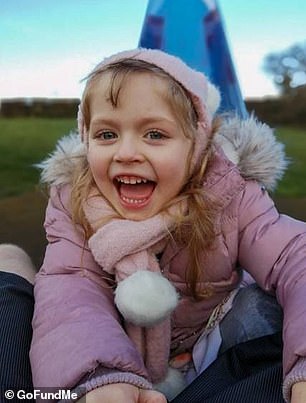 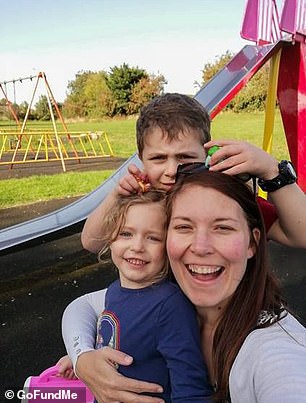 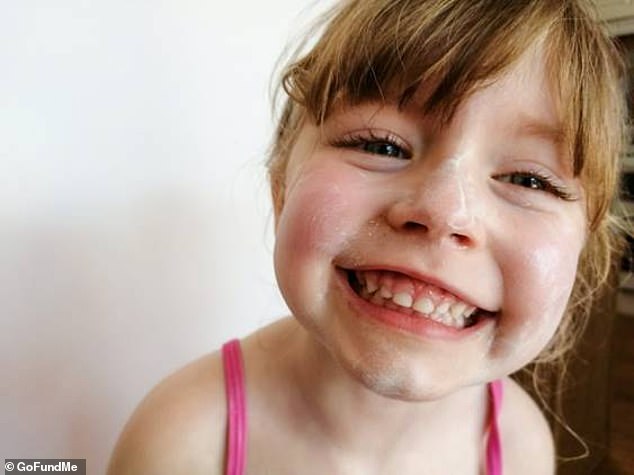 ‘Ever since she was born, my only dream was to walk her down the aisle,’ her father David said

‘Then she had her first seizure in May. There was a point where she didn’t take a breath of air for 30 seconds until I remembered my first aid training and gave her the Heimlich maneuver.

‘Thankfully she expelled some of the fluid and took a big gasp of air, it was just as the paramedics walked through the door.’

Adelei was taken to Great Western Hospital in Swindon by ambulance after another seizure on the M4 over the summer.

WHAT IS BATTEN DISEASE?

It is caused by waste buildup in the cells which creates neurodegnerative effects including:

Because it is a rare disease, it is often difficult to diagnosed and untested at birth.

There are 14,000 children worldwide that are diagnosed with the disorder.

There is currently no known cure or treatment available for Batten disease.

She was blue-lighted us to the John Radcliffe Hospital in Oxford, where she spent ten days and ended up having 17 seizures a day.

After MRI showed her brain was underdeveloped, doctors carried out more tests and David was called on the day she was examined by a paediatrician in Swindon.

He said: ‘When I got there, the first thing he said to me were the words ‘I’m very sorry’. That was like a punch to the gut.

‘I knew Addy was terminally ill just from the tone of his voice. He said “I hate to be the one to tell you, but your child has Battens”.

‘I had no clue what Battens was but I could tell it was horrific, so he filled me in.

David went to Great Ormond Street Hospital that day, because it is the only hospital in the country that deals with the disease.

Doctors told him his daughter would lose her memory and go blind in the next few years.

They said she would d be in a vegetative state by age seven and likely dead by the age of ten.

David said: ‘There’s no cure. No magic drugs that’ll let her live a normal life for a bit.

‘When he was telling me all that it was like an out of body experience, it didn’t feel real.

‘Ever since she was born, my only dream was to walk her down the aisle. I didn’t care about her being a doctor or a lawyer, I just wanted her to be happy and healthy.

‘All those dreams I had died in that moment. All I could think is was “Why me, why her? Why do we deserve this?”

‘I just couldn’t believe what I was hearing. Battens only affects around 40 kids in the UK, why did Addy have to be one of them? 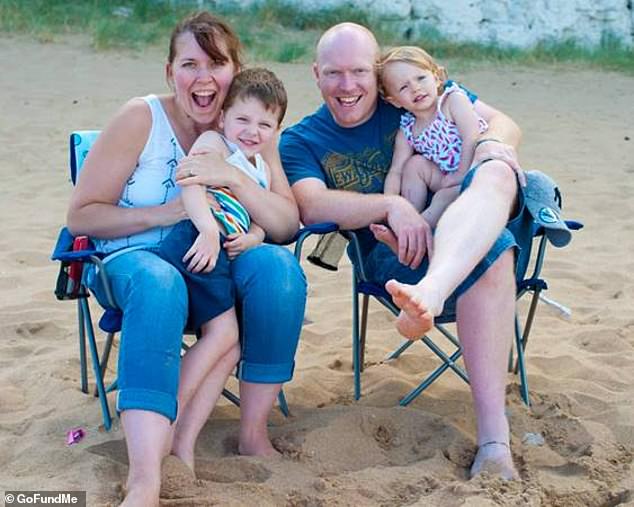 The family have set up a fundraising page to help pay for the costs of travelling between Swindon and London for Adelei’s treatment. 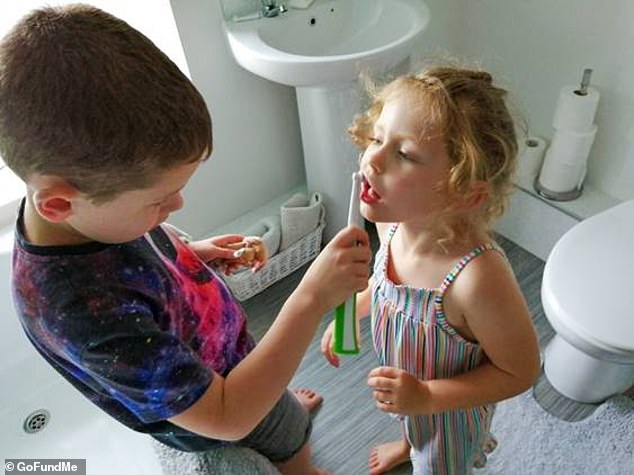 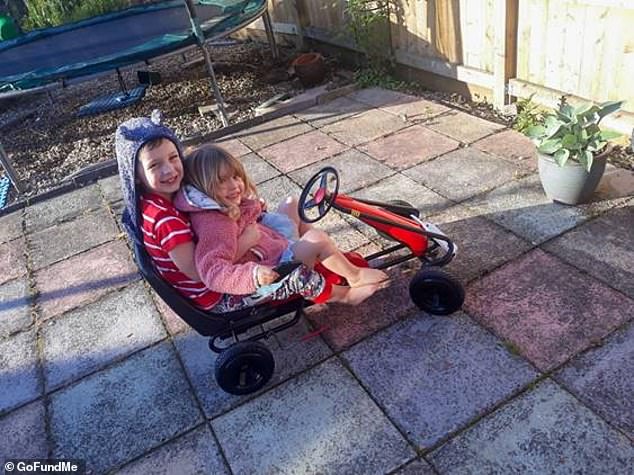 ‘He asked us if he’ll ever be able to talk to her properly, and we said no,’ father David said

‘I’ve only heard her say her own name twice, I’ve never had a conversation with her because she only has around 30 words – and now I never will.

‘I’ll never hear her say she that loves me – all those things you take for granted as a parent, gone in an instant.’

David and Hayley had to sit down Adelei’s seven-year-old brother Samuel to tell him what was happening to his sister. 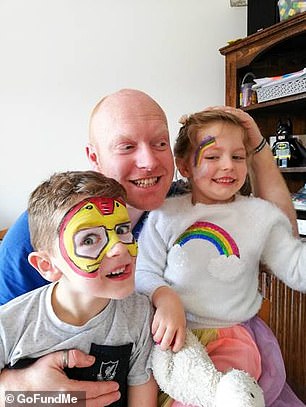 David said: ‘Telling her brother was the hardest thing we’ve ever done.

‘We sat Samuel between us on the bed and told him that Addy’s brain wasn’t working.

‘He asked us if he’ll ever be able to talk to her properly, and we said no.

‘He just looked down and didn’t say anything.

‘Ever since we told him he’s done his best to be nice to her.

‘The other day he even gave up the TV so she could watch Peppa Pig – it was unheard of!

‘It’s an awful situation but I’m so proud of how he’s handled it so far.

‘He’s only seven but he’s shown a maturity beyond his years.’

The family have set up a fundraising page to help pay for the costs of travelling between Swindon and London for Adelei’s treatment.

They also want to move into a bungalow in order to free up more funds as both David and Hayley, a photographer, give up work to become full-time carers in the future.