NEW BUILDING IS A PLEDGE OF CONFIDENCE 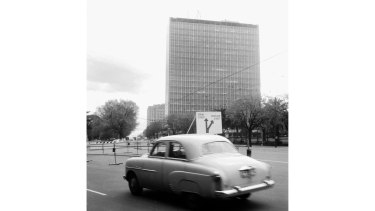 The I.C.I. building on the corner of Nicholson Street and Albert Street.Credit:The Age Archives

Representatives of Parliament, the judiciary, the City Council, the arts and industry heard Sir Alexander Fleck describe the building as a landmark in the development of the Australian manu-facturing industry.

"It Is not simply a company event, but an Australian achievement," he said.

It was also a pledge of confidence in Australia's future.

The move towards industrialisation, represented in the I.C.I. building, was very much part of the current Australian scene.

"In the short time I have been here I have seen remarkable progress in both science and industry," he said. "Facilities that were almost undreamed of 10 years ago are now taken for granted."

At the same time he was aware of the need for increased agricultural production in Australia.

"Australia is rightly diversifying its activities so that it will not completely depend on its exports of wheat and wool, especially since these commodities may fluctuate violently in price," Sir Alexander Fleck said. 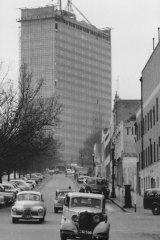 "This diversification must come from industry.

"Because of the drift away from agricultural employment, a higher output of farm and of pastoral products will depend on increased mechanisation and improved methods.”

He said that to produce the essential mechanical equipment and to provide amenities for the many parts of Australia which were remote from the larger towns, considerable industrial efforts would be needed.

"At this stage it is clearly not within the power of Australian business to produce unaided the very large sums needed for development," Sir Alexander Fleck said.

"But, if Australia can solve its water problems, which does not seem impossible, and if it can continue to attract the numbers needed to build up its population, the great surge forward that we are seeing now represents only a beginning."

I.C.I. House was begun in September, 1956, and completed in October this year. It is 275 feet high, and the main block is 19 stories above ground.

The 2/ admission fee which will be charged will go to the Lord Mayor's Fund.