Quake damage ‘once every 500 years’

Melbourne can expect a damaging earthquake once every 500 years, according to seismologist Mr Gary Gibson.

The tremor that struck Melbourne yesterday was of about the same strength – 5.2 on the Richter scale – as the hypothetical 500-year quake, but was centered 40 kilometres offshore from Apollo Bay. 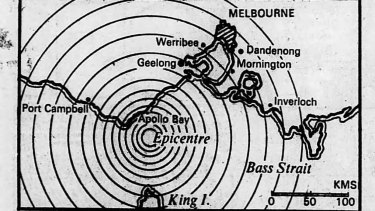 The impact of the earthquake.Credit:The Age Archives

“In a 500-year quake in Melbourne there would be enough vibration t to cause considerable damage,” Mr Gibson said. “But people would have to be unlucky to be killed.”

The magnitude of an earthquake is not as important as its location. A relatively puny but shallow earthquake measuring only 4.5 on the Richter scale has been responsible for killing 2000 people in Morocco. A shallow quake struck Warrnambool in 1903 damaging houses, toppling church steeples and bending railway lines.

Mr Gibson, head of the seismology department at the Preston Institute of Technology, said that 250 small earthquakes struck Victoria each year. Despite this, Victoria rates zero on the official worldwide earthquakes risk scale.

Adelaide, which was struck by a magnitude 6.5 shock in 1954, has been assigned the low risk rating of one. There, tall buildings have to be reinforced, adding about 10 per cent to their cost.

Victoria’s seismic history goes back to the opening of the Tasman Sea 100 million years ago, according to Dr Peter Wellman, a geophysicist at the Bureau of Mineral Resources in Canberra. The continental plate that supports Australia on the subterranean sea of molten rock broke up and New Zealand literally floated eastwards.

Australia was drifting northwards over a volcanic hot spot at the same time. Thirty million years ago the hot spot was under Queensland and six million years ago it passed under the Macedon region where lava squeezed through the crust to form landmarks such as Hanging Rock.

The Eastern Highlands were rising throughout this period of seismic activity – and still are. Dr Wellman has traced the uplift, caused by an east-west compression of the continent, by measuring the rate of down-cutting of river valleys.

“Imagine a piece of bread with a diagonal cut across it,” Dr Wellman said. “Pushed together, one piece will over-ride the other. This is what is happening in south-east Australia.

The flexing of the hundreds of fault that lie under Victoria is nothing by comparison with forces unleashed when two continental plates rub against each other – as at the San Andreas fault in California. The Pacific plate there is moving north and the North American plate south. Tension is built up in the rock around the fault until it is released with a sudden, jerking quake.

Earthquake prediction is fast becoming a scientific possibility. Natural phenomena such as the height of water in wells, the strength of the earth’s magnetic fields and the electrical conductivity of rock are known to change subtly just before an earthquake.

The Chinese, who even monitor animal behavior as a means of earthquake prediction, have had about 25 big evacuations sparked by earthquake warnings. In five of these cases severe earthquakes occurred and thousands of lives were saved.

Mr Gibson said it might be extremely difficult to persuade people to leave their homes on the basis of a scientist’s prediction, especially in places such as California where people live through many small quakes.

“If a seismologist could predict an earthquake over there, he would not be game enough to make it public,” Mr Gibson said. “If he were wrong, there would be a strong possibility of legal action from businesses that were forced to close.

For most, a tremor of annoyance

To those Victorians still flat on their backs in bed when yesterday’s earth tremor came, the sensation was pronounced… if a little hard to describe.

People lying down are much more sensitive to the ground movements caused by an earthquake than are people moving about on their feet.

But if yesterday was anything to go by, lying down did not help us to think.

One ‘Age’ reader rang to say that he thought his wife had switched on the family washing machine which apparently shakes the whole house; another called out to his wife to stop slamming the wardrobe door.

Another thought the movement was his dog moving about under his bed and an Edithvale woman called downstairs to her teenage children to “stop wrestling.”