Victoria is enduring an unusually high rate of gastroenteritis, with almost 400 outbreaks spreading through hundreds of childcare centres across the state.

The state’s Health Department issued an advisory on Monday morning, confirming what many carers of young children have already experienced first hand. 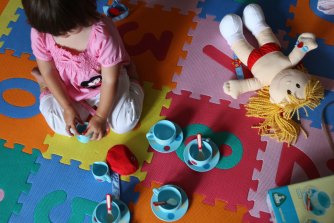 Victoria’s childcare centres have been hard hit by gastro outbreaks this year.Credit:Peter Braig

There have been 389 outbreaks of viral gastroenteritis reported in Victorian childcare centres this year, a rate four times higher than average.

Geelong and a number of outer areas of Melbourne have topped the list for the largest number of outbreaks. There have been 29 reported in Greater Geelong, 17 in the council area of Casey, 16 in Wyndham and 15 in the Yarra Ranges.

Few areas have escaped outbreaks of the highly infectious disease, recorded from Warrnambool in the west of the state (one outbreak) to East Gippsland (two cases).

Dr Abhi Verma is a GP in Casey, one of the worst-hit council areas, which includes the suburbs of Cranbourne, Fountain Gate and Narre Warren. He said he had seen a high number of cases in the past four to six weeks.

Dr Verma, who is also a spokesman for the Royal Australian College of General Practitioners in Victoria, said it wasn’t just young children who attend childcare being affected, but also their parents, grandparents and other carers.

He said it was possible the end to strict coronavirus lockdowns in Victoria was a factor.

“Perhaps now with a bit of relaxation of social distancing and … people not being as vigilant with hand hygiene compared to this time last year, things might have shifted a little bit,” he said.

They can take up to three days to develop and usually last one or two days, sometimes longer. In rare cases it can lead to more serious illness, according to the Health Department.

“We’ve certainly had one or two that we’ve had to put some IV fluids in and send to hospital because they’ve just not been able to keep up with the drinking,” Dr Verma said.

“The key to this thing is to maintain adequate hydration.”

Parents and childcare operators have been urged to step up hand washing with soap and water as the best defence against the intestinal infection.

Victoria’s executive director for communicable disease, Dr Bruce Bolam, said while alcohol-based sanitiser helped tackle coronavirus, it was much less effective against bugs such as norovirus, the predominant cause of the current childcare outbreaks.

“Gastroenteritis can spread quickly through settings such as early childhood education and care services, where children play and interact closely with each other and can readily spread their bugs,” Dr Bolam said.

“Hand washing with soap and water is still the best personal hygiene method to minimise the chance of spreading the virus,” he said.

“A good old-fashioned scrub with soap and warm water is the best way to remove the gastro virus from our hands and prevent passing it on to infect others.”