GCSE and A-level exams will be made easier in 2021

Next year’s exams will be made dramatically easier while the summer’s record-breaking grade inflation will be allowed to continue, the Education Secretary has announced.

Pupils sitting their GCSEs and A-levels in 2021 will be told in advance the topics covered in the exam, be allowed to take reference sheets into the exam room – and see marking standards relaxed.

Gavin Williamson has been determined not to cancel next year’s exams in England – despite the disruptions to learning caused by Covid. 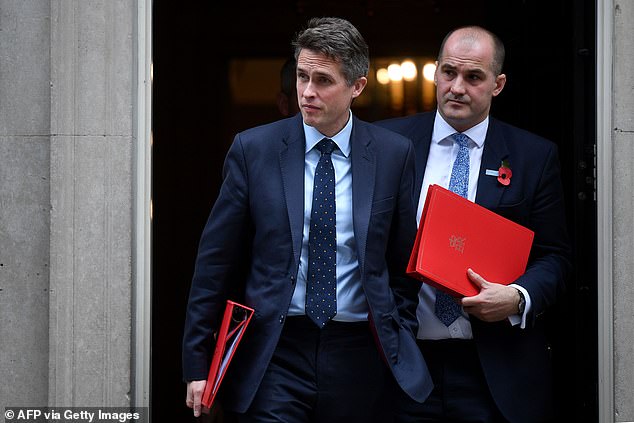 Education Secretary Gavin Williamson, pictured, is determined to hold exams in England next year. Officials in Wales have already cancelled next year’s exams while Scotland has decided their version of GCSEs will be determined by assessment

Exams in Wales have been cancelled next year, while the Scottish government has decided to replace their GCSE equivalent, National 5 exams, with assessments. After initially announcing a three-week delay to the national exam schedule to grant pupils extra revision time, Mr Williamson has now unveiled more ‘exceptional steps’ to try to safeguard fairness. Exam candidates this summer ended up with top grades at an unprecedented level, after the Government had to abandon its disastrous to attempt to dish out grades awarded by a computer algorithm.

But Mr Williamson, who previously said grade inflation ‘devalues’ exams, has now given the go-ahead for next year’s candidates to enjoy equally ‘generous’ results.

Yet the decision to allow another surge in top grades means those taking exams in 2022 could end up being affected as results ease back to the historic norm.

Other measures designed to reduce pressure on pupils next summer include giving them warning of what exam topics are going to come up. They will in many cases be allowed to take in written material like formula sheets, and extra papers will be scheduled in case candidates are sick or self-isolating.

If pupils end up missing all opportunities to sit an exam, their teachers’ estimates will accepted as their final grades.

Coronavirus continues to have a devastating effect on the number of pupils missing school, with figures showing more than a fifth of secondary school pupils were absent last week – the second consecutive week this has happened.

And one of the most complex issues – how to maintain fairness when different areas of the country have experienced different levels of disruption – is yet to be solved.

The Department for Education said it would form an ‘expert group’ to tackle the problem.

Mr Williamson said: ‘Exams are the best way of giving young people the opportunity to show what they can do… I know students are facing unprecedented disruption to their learning. That’s why exams will be different next year, taking exceptional steps to ensure they are as fair as possible.’

Geoff Barton, general secretary of the Association of School and College Leaders, said: ‘This solution to next year’s A-level and GCSE exams will make them as fair as they can be in the circumstances.’

Dr Mary Bousted, joint general secretary of the National Education Union, said: ‘It is welcome that the Government has at last shown that it is beginning to understand the concerns of teachers, parents and students about next summer’s exams and recognised that we cannot plough on ahead without further adjustments.’

The Government also announced that full Ofsted inspections will not resume until the summer.