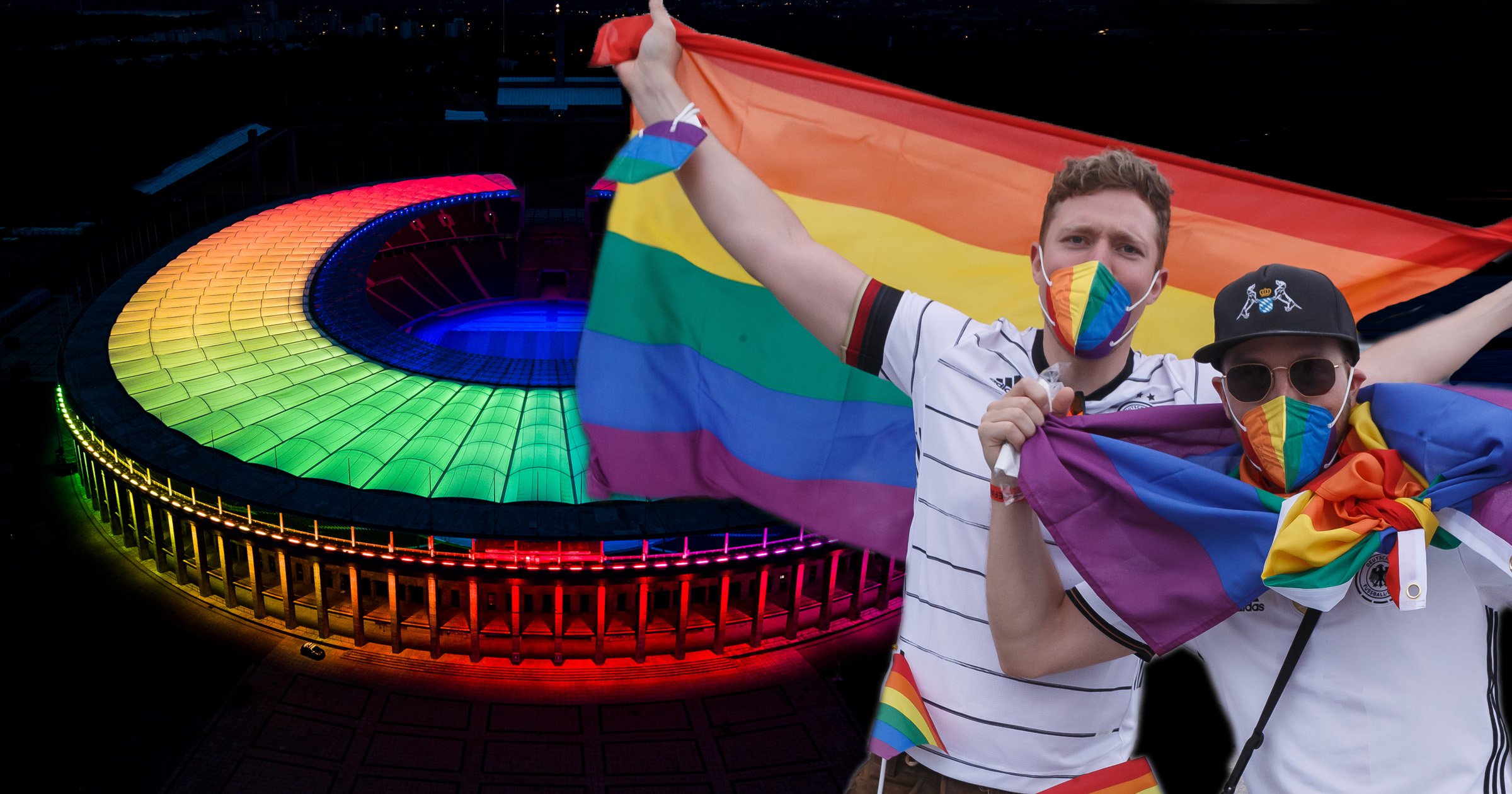 German football stadiums were lit up like rainbows on Wednesday night after UEFA banned the ground hosting a Euro 2020 match against Hungary from using pride colours.

The European governing body was slammed for refusing to allow Munich’s Allianz Arena to be illuminated with rainbow lighting, following a widely-criticised new anti-LGBTQ law in Budapest.

The authorities in Munich had planned to light the stadium up in rainbow colours to ‘send a visible sign of solidarity’ with Hungary’s LGBTQ community, before UEFA stepped in.

But other venues across Germany were lit up with pride colours in defiance of the ban for the key final group game, which ended in a draw and Hungary’s elimination from the competition.

Hungary and UEFA were blasted over the law and subsequent move and as criticism built, UEFA defended its decision but added the rainbow to its logo.

In a statement, it said ‘is proud to wear the colours of the rainbow’, a symbol for the LGBTQ community, but stood by its decision by saying the city of Munich’s request to illuminate the stadium was ‘political’.

Budapest praised UEFA for taking a stance against ‘provocation’, as the country’s stadia lit up in national colours in a tit-for-tat display during the game.

Munich’s mayor Dieter Reiter said: ‘I find it shameful that UEFA forbids us to send a sign for cosmopolitanism, tolerance, respect and solidarity with the people of the LGBT community.’

His intervention came as plans were unveiled to put up rainbow-coloured flags at its town hall and illuminate a huge wind turbine close to the stadium, as well as the city’s 291-metre (955-foot) Olympic Tower.

Other stadiums across Germany also displayed rainbow lights, including Berlin’s iconic Olympic Stadium, as well as Bundesliga stadiums in Cologne, Frankfurt and Wolfsburg.

German newspapers, such as the Sueddeutsche Zeitung, displayed rainbows on their front pages, while Bavarian industrial giants such as Siemens and BMW also decked themselves in rainbow colours on Twitter.

Individuals also made a show of their opposition by draping themselves in rainbow colours.

And as Leon Goretzka scored a late equaliser to eliminate the Hungarians, he flashed the country’s ‘ultra’ fans a love heart sign.

Hungary’s Mr Orban hails from the far right and has faced criticism for his stance on various issues from immigration to press freedom and LGBTQ rights.

Fifteen of the EU’s member states have signed up to voice their ‘grave concern’ at the LGBTQ law that Budapest argues will protect children.

‘This bill clearly discriminates against people on the basis of their sexual orientation. And it goes against all the values, the fundamental values of the European Union,’ Ms von der Leyen told a media conference in Brussels.

Get in touch with our news team by emailing us at [email protected].