A German man who was dubbed ‘Rambo’ after disarming four police officers at gunpoint before going on the run is thought to have penned a manifesto found by police.

The manifesto, titled ‘The Call of the Wild’, is thought to have been written by Yves Etienne Rausch, 31, who has gone on the run in Germany’s Black Forest.

It was found in a bar shortly after Rausch ‘suddenly and completely unexpectely’ pulled a gun on police officers who carried out an ID check on him in a hut near Oppenau in Baden-Württemberg. He made the police hand over their weapons before running away.

The discovered manifesto argues that people who live close to nature are superior to modern city-dwellers.

Rausch spent time in prison for shooting his girlfriend with a bow and arrow, local media reports.

Around 200 officers are combing the Black Forest with the help of special forces, helicopters and sniffer dogs in the search for Rausch, who fled on Sunday.

His mother told Baden Online the police should ‘withdraw all their forces’ because he will ‘come out of the forest by himself’. 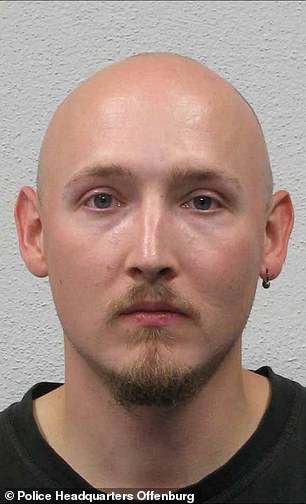 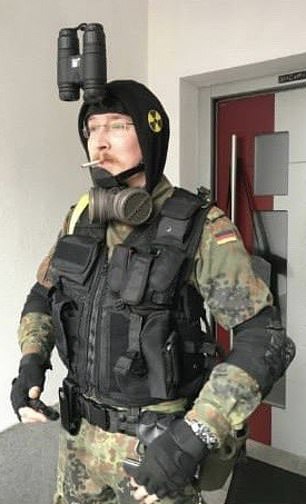 Special forces and helicopters are being used huge manhunt for a camouflage-wearing Yves Etienne Rausch, 31, (pictured) who disarmed four officers at gunpoint in Germany

Local newspaper Badische Zeitung has reported that the forest area cannot be cordoned off and each officer involved in the search is carrying a backpack weighing up to 66 pounds (30kg).

The paper added that Rausch could survive by eating wild plants and insects and by drinking spring water.

There are also local vegetable plots which he could raid at night, they claimed.

Rausch has been likened to the fictional Rambo made famous by Hollywood star Silvester Stallone. Stallone’s character is a violent Vietnam war veteran who flees from US police.

Police in Oppenau earlier warned local residents to stay at home and not pick up any hitchhikers.

Authorities said Rausch is carrying several firearms and known to be violent. 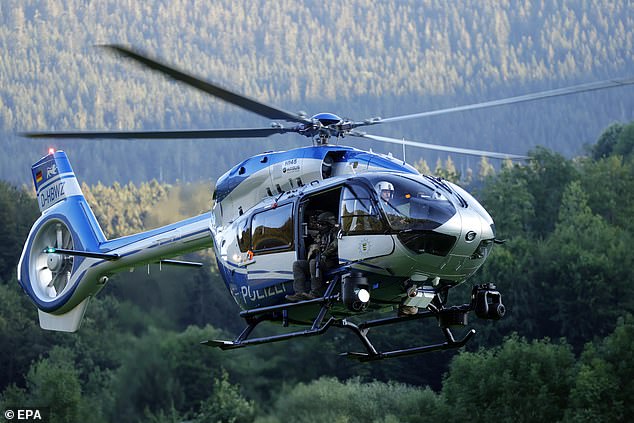 Around 200 officers are combing the Black Forest with the help of special forces, helicopters and sniffer dogs in the search for  Yves Etienne Rausch, who fled on Sunday 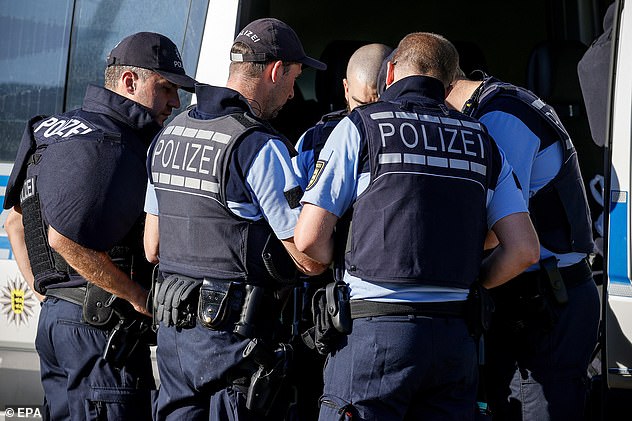 The manifesto, titled ‘The Call of the Wild’, is thought to have been written by Rausch. Pictured: Police during their initial hunt for Rausch on Sunday

Four officers were sent to a hut which Rausch was living in in the forest on Sunday morning following reports of a suspicious man.

The suspect cooperated at first, but suddenly threatened them with a firearm, leaving the officers ‘no time to react to the dangerous situation,’ police said.

The man made the officers hand over their weapons before running away, ‘presumably’ taking their firearms with him.

Rausch’s mother said he was evicted from his rented flat last year.

It is not clear if this is the same flat above a local guest house which Bild reported Rausch had lived. He had reportedly set up a shooting range in the attic.

Weapons were also found, according to reports. 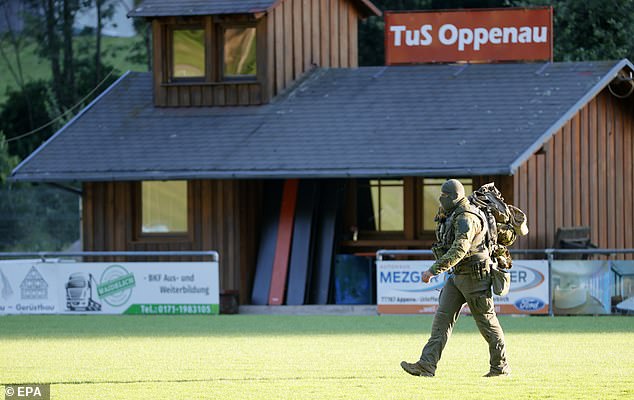 His mother told Baden Online the police should ‘withdraw all their forces’ because he will ‘come out of the forest by himself’. Pictured: One officer during the search for Rausch

Rausch’s mother said he had gone to his aunt’s after being evicted but then went to live in the forest.

She said he is a ‘woodsman’ and ‘wanted to escape into nature, to be free.’

His mother added that she had had a coffee with him on July 8 where he had appeared ‘perfectly normal’.

A police spokesman was cited as saying the man was in a state of ‘psychiatric emergency’ and should not be approached.

The police weapons were P2000 semi-automatic pistols that can hold up to 16 bullets each, according to Bild, meaning the man could have an extra 64 shots at his disposal.

Rausch is described as being around 5-foot, 7-inches tall, bald, with a goatee beard and wearing camouflage clothing and possibly glasses.