Getting on top of mystery cases key to ending lockdown, Sutton says

The number of “mystery” cases with an unknown source will be key to lifting Melbourne’s lockdown restrictions next week, Chief Health Officer Brett Sutton says.

As Victoria’s outbreak grew by six and the seven-day lockdown was extended into a second week, Professor Sutton said on Wednesday that it was too early to outline benchmarks to ease the tough restrictions next week. 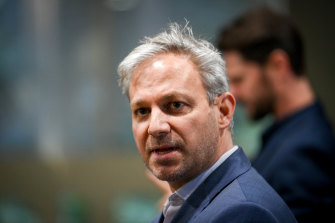 Chief Health Officer Brett Sutton says getting on top of mystery cases is the most important task. Credit:Eddie Jim

He indicated, however, that the number of mystery cases would be crucial as “we can’t have one or two cases out there then open up to the kind of settings we had before”.

While Melbourne’s lockdown will continue for another week, restrictions will be eased in regional Victoria from Friday with hospitality and retail to re-open with limited capacity, students and teachers to return to school and limits on movement to be lifted. Private gatherings remain banned.

In the two main concessions for the city, the five-kilometre movement radius will be extended to 10 kilometres and year 11 and 12 students will return to face-to-face learning from Friday

Professor Sutton illustrated a confidence in contact tracers’ work, which he said had “done almost all the heavy lifting” on piecing together and controlling the cluster so far.

“Clearly we are doing rings of control here that make a difference, more comprehensively than has ever been done before,” Professor Sutton said.

Of 5200 primary close contacts, 78 per cent had returned negative results by Wednesday although the source of infection was unknown for a family of four that was among Wednesday’s six cases.

Three of the 60 cases in the cluster circulated through the community while infectious for at least a week before getting tested, causing the list of exposure sites to exceed 350.

Explaining the seven-day extension to Melbourne’s lockdown, the city’s fourth since the pandemic began 15 months ago, Professor Sutton pointed to several instances where the virus had spread from stranger to stranger in the last fortnight.

That included one case where a pubgoer contracted the virus in an outdoor area at Brighton Beach Hotel, which was listed as an exposure site on Sunday.

Professor Sutton said it was largely due to the “really contagious” strain of COVID-19 spreading through Victoria – the Indian variant which the World Health Organisation recently renamed the Kappa variant.

“The Kappa variant, as it’s now called, is not the most infectious, but it is more infectious than anything in the beginning and middle of 2020,” he said.

“At least one in 10 current cases caught the virus in those casual contact settings … It’s absolutely clear that we need to run this completely to ground to be happy that we can open up appropriately. We can’t let it get away. We can’t go to settings where it would move unchecked with huge numbers of people exposed.

“So we’ve got restrictions for another week to limit the number of unique close contacts that people will have, and to limit it as we did last year.”

A separation of restrictions between Melbourne and regional Victoria will not spark the reintroduction of a “ring of steel” around greater Melbourne’s perimeter, with roving police checks to be used in place of checkpoints, in line with requests by the police union this week.

Acting Premier James Merlino asked regional businesses to check customers’ IDs before serving them to ensure they had not travelled from Melbourne, insisting that Victorians “overwhelmingly do the right thing”.

The government will also make it mandatory to check-in via QR codes at all retail and hospitality settings, including supermarkets, as a condition of entry – a week after all of Victoria moved to one QR system, eight months after NSW.

The man who visited the NSW south coast while potentially infectious on May 23 and 24 was part of the family of four who tested positive, with authorities also investigating which family member picked up the virus first.

A source of infection is also yet to be found for an aged care worker at Arcare in Maidstone, in Melbourne’s north-west, and “case five”, the man who authorities believe is the link with the Wollert man who contracted COVID-19 in hotel quarantine in early May.

Mr Merlino renewed his demands for the federal government to pitch in on economic support for businesses affected by the lockdown. He called for a JobKeeper-style wage subsidy to be revived in addition to the state’s $209 million package announced on Wednesday and $250 million on Sunday.

“The Treasurer [Tim Pallas] has been calling [federal Treasurer] Josh Frydenberg this morning to put that request in and I will be speaking to the Prime Minister later today,” Mr Merlino said.

“I do hope that the Commonwealth will swiftly confirm that they will step up and provide that support. If they do not, I’ll be raising this directly at national cabinet on Friday.”

Mr Frydenberg responded in a press conference by questioning why Victoria had endured 140 days of lockdown since the end of last year’s first nationwide lockdown, compared with the national average of six, and appeared to question Wednesday’s decision to extend the seven-day lockdown.

“Our health officials want to understand the various reasons and the thinking behind it,” he said from Canberra.