Global coronavirus cases hit 20million and more than 734,000 people have now died in the pandemic, data shows – and a QUARTER of all diagnosed infections have been in the US

The global number of Covid-19 cases has reached 20million, according to the Johns Hopkins University Coronavirus Resource Centre.

It marks a major milestone in the spread of the respiratory disease that has so far killed 734,000 people in just over eight months.

A quarter (five million) of diagnosed infections have been in the US, where daily cases are continuing to rise.

Health officials believe the real figure of cases worldwide is in fact far higher due to testing limitations and the fact as many as 40 per cent of people infected have no symptoms. 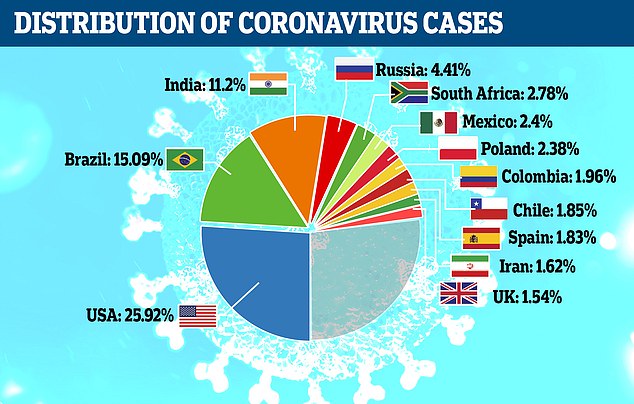 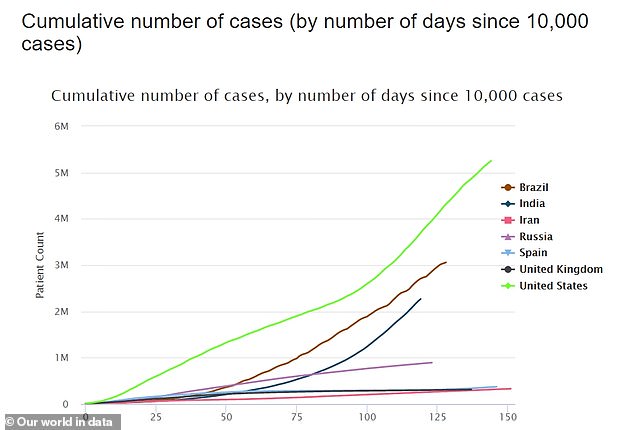 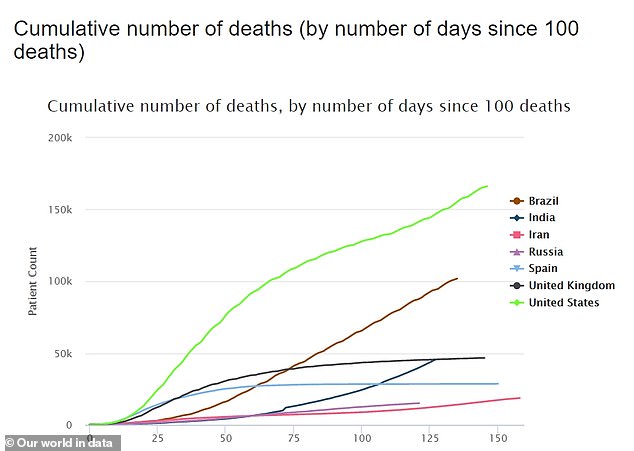 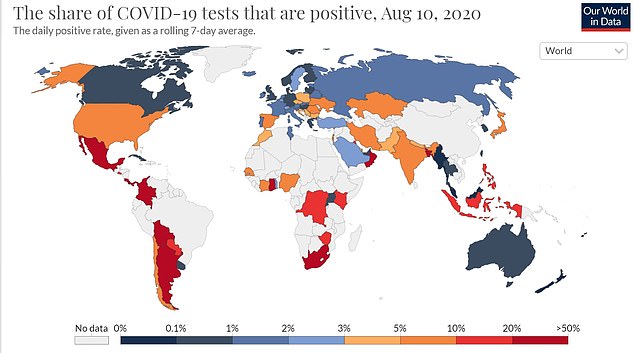 Where most cases are currently being diagnosed

Since the coronavirus was first detected in China in December 2019, it has spread across the world relentlessly.

It took almost six months to reach 10million cases after the first infection was reported in Wuhan, China, in early January.

But it’s taken just 43 days to double that tally to 20million, meaning cases appear to be accelerating globally, rather than slowing down.

The grim milestone of 20,011,186 cases worldwide was reached in the early hours of Tuesday morning, UK time.

The respiratory disease has infected at least four times the average number of people struck down with severe influenza illnesses annually, according to the World Health Organization.

The pandemic has taken a turn having been centered in Europe for months, with India and Brazil currently battling sheer numbers of new cases per day.

Days earlier, on July 29, Brazil recorded a staggering 70,869 infections in one day. It;s daily average has showed signs of stabilising at around 43,000.

The two countries with the US have accounted for two-thirds of all cases diagnosed.

But the real number of cases globally is expected to be even higher than tallys suggest due to differences in how countries record cases and test people.

For example in the UK, testing was extremely limited at the height of the crisis in March and April, meaning potentially millions were never diagnosed.

The UK has 313,392 cases according to the experts at the Johns Hopkins, in Baltimore, whose aggregated tally has become the main reference for monitoring the disease.

WHICH COUNTRIES HAVE THE MOST CASES?

WHICH COUNTRIES HAVE THE MOST DEATHS?

It puts the UK 12th on the list of the worst hit nations over the course of the pandemic, just behind Spain.

Although the US accounts for the most cases, the pandemic is accelerating fastest in Latin America.

The block accounts for almost 28 per cent of the world’s cases and more than 30 per cent of deaths, according to a different tally collected by the news agency Reuters.

The first death linked to the new coronavirus was reported on January 10 in Wuhan in China, before infections and fatalities surged in Europe, then the US, and now Latin America.

The death tolls from some countries who suffered hardest in the early months of the pandemic appear to have stabilised.

Italy now ranks behind India in sixth place with 35,209 deaths, France next with 30,327, ahead of Spain on 28,576. The three European nations were once the epicentre of the pandemic.

The UK ranks fourth, with 46,111 deaths, according to the government, ahead of India, Peru and Iran.

Peru ranks ninth, with the second-highest fatality toll in South America, at 21,072.

Despite having the fourth-highest number of cases, Russia sits only 11th by deaths, with 14,973.

Similarly South Africa ranks only 13th by deaths, with 10,621, despite sitting fifth by number of cases.

In the US, deaths from Covid-19 fell last week after four weeks of increases, according to Reuters. About 7,200 people died last week, 26 per cent below the previous week.

And despite the states having the most cases globally, new cases have now fallen for three straight weeks.

President Donald Trump signed executive orders intended to provide economic relief to Americans hurt by the coronavirus pandemic after the White House failed to reach a deal with Congress.

On Friday, the US Labor Department reported that employment growth slowed considerably in July, underscoring an urgent need for additional government aid.

Dr Anthony Fauci told Reuters on Wednesday there could be at least one vaccine that works and is safe by year-end.

Trump offered a more optimistic view, claiming it was possible the US would have a coronavirus vaccine by the time of the November presidential election.

Although there are vaccines in the late stages of human trials, it is not expected for any to be available until 2021.

Scientists say the only way for life to return to how it was before the coronavirus arrived is a for a vaccine to be found.

The vaccine race has more than 150 candidates being developed and tested around the world with 25 in human clinical trials, according to the World Health Organization.

Until one is found, the UN agency has urged governments to do as much as they can to encourage social distancing, hand washing and face coverings.