This is the shocking moment Good Morning Britain reporter Jonathan Swain followed ten migrants as they crossed the Channel – as experts warned they are being told by smugglers to cross now before Brexit is finalised.

The small, packed boat was sitting dangerously low in the Channel as one man on board bailed out water, while in the distance a French coastguard vessel could be seen escorting it into British waters.

Mr Swain told GMB viewers: ‘That is actually shadowing a migrant dinghy all the way from the French coast, so no attempt to intercept it or turn it round to France.’

French officials claim they are unable to lawfully turn migrant boats back due to maritime laws and this would require a new treaty. 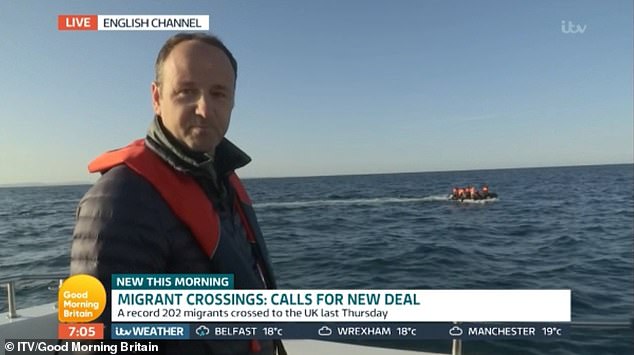 The extraordinary incident happened on GMB this morning when Jonathan Swain was reporting from the Channel on migrant crossings, which a former Border Force chief has said are reaching ‘crisis’ levels.

As the camera panned towards the boat, he said: ‘I just want to show you something that’s happening right now, this is symptomatic of the problem, we’ve just zoomed the camera in, that is the French coastguard you can see there just in the distance, we are not allowed to get any closer there is an exclusion zone around.

‘What they are doing (pan the camera round to the left) in the distance is a UK border Force boat called seeker, that is now waiting for the migrant boat to be dropped off effectively by the French coastguard. Then UK Border Force will take those migrants back to Dover.’

The reporter shouted over at the ten men in the boat to ask if they were ‘ok’ and several of them replied with a thumbs up.

Mr Swain told GMB viewers: ‘There are strict rules here, we can’t intervene at this stage… we’re going to keep an eye on this and if they get into further distress then we have to then perhaps intervene.’

More than 3,500 people have crossed the Channel so far this year, including 202 in 20 boats last Thursday, a record for UK Border Force.

Migrants are being told by people smugglers it is ‘now or never’ to cross the Channel because the UK’s borders will close next year when it is finally out to the EU.

This has fuelled a rise in illegal crossings with desperate people paying up to £6,000 a time to join one of the risky voyages.

Lucy Moreton, professional officer at the Immigration Services Union, told The Times: ‘We know people smugglers are telling migrants that once Britain leaves the EU this will stop.

‘This is used by them to gee up people to make the journey in case they miss out. Of course, it is not true. They are just saying it to encourage people to get over now.’ 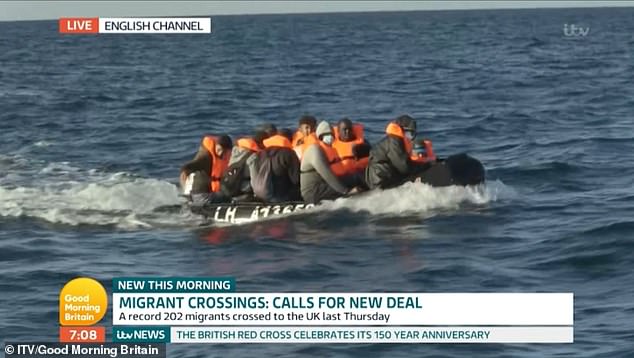 The small, packed boat was sitting dangerously low in the Channel as one man on board bailed out water, while in the distance a French coastguard vessel could be seen escorting it into English waters

Former Border Force director Tony Smith says that crossings are now approaching ‘crisis’ levels and are on the brink of repeating the asylum crisis of the early 2000s.

He called for urgent action to allow claims for asylum in the UK to be processed on French soil – with only those who approved in advance allowed to enter this country.

Mr Smith said if daily arrivals continue to grow ‘you’re going to start getting up to the numbers that actually were indeed a crisis almost 20 years ago’.

He added: ‘I do worry that if we can’t get a new agreement with the French on returns we’re not going to be able to stop this and we could see numbers of the scale of which we’ve seen in years gone by.’

Mr Smith said the UK and France need to agree joint patrols which would intercept migrants in the Channel and return them to France to have asylum claims considered there.

Such an approach would be a new departure and would mirror the UK Border passport checks that take place in France and other countries for legitimate travellers, known as ‘juxtaposed controls’. 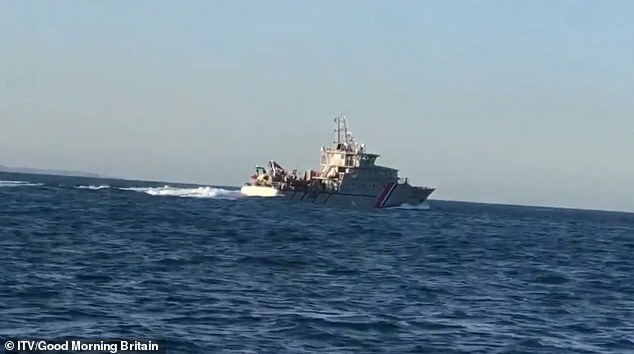 The French Coastguard vessel that was escorting the boat into UK waters, where Border Force were waiting

However, EU treaties set out that asylum should be claimed in the first safe country reached by a migrant – in this case, France.

And Mr Smith’s proposal could require the UK and France agreeing to operate a joint asylum policy, which would be controversial.

‘If they want to come to the UK they need to make their case on the French side, and if they are found in the waterways or even make it as far as Dover we say ‘I’m sorry but you go back there and that’s where you will be interviewed and processed, on the French side’.’

He said the current situation was putting lives at risk and ‘fuelling the smuggling supply chains’.

The crisis in the early 2000s, when David Blunkett was home secretary, saw thousands of migrants gather at Sangatte, a Red Cross holding camp a mile from the Eurotunnel entrance.

Mr Blunkett agreed a series of deals with Paris to combat the problem and have Sangatte bulldozed, thanks to fruitful collaboration with his counterpart Nicolas Sarkozy, who went on to be French President. 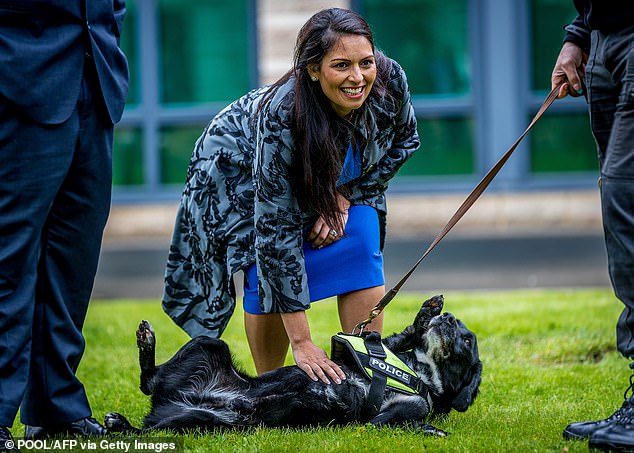 Current numbers are rocketing despite Home Secretary Priti Patel’s promise, made last October, that she would virtually eliminate crossings by now.

Last month the Mail reported how the Royal Navy has been testing the use of nets to stop illegal boats in the Channel.

Miss Patel said she wants ‘stronger enforcement’ on the other side of the Channel and was working to persuade the French government to ‘show willing’ and allow migrant boats to be turned back.

‘I’ve had some very, very – I think it’s fair to say – difficult discussions with my French counterpart even looking at interceptions at sea because currently the French authorities are not intercepting boats at sea,’ Miss Patel told MPs.

‘A lot of this is governed by maritime laws and the French authorities’ interpretations of what they can and can’t do at sea.’

Last weekend, a migrant was airlifted to hospital suffering from hypothermia after reaching Britain on a small boat.

The man, who gave his nationality as Sudanese, was picked up off Ramsgate, Kent, on Sunday morning after making the perilous 21-mile journey across the Channel with two others.

He was flown to the William Harvey Hospital in Ashford by the Coastguard’s search and rescue helicopter – which plucked him from a lifeboat at sea.