Gobbo consents to being struck off bar roll

In a court hearing on Monday, lawyer-turned-informer Nicola Gobbo has agreed she should be struck off as a barrister for lying to become a lawyer and for her duplicitous conduct in the decade afterwards.

The Legal Services Board has gone to the Supreme Court to finally remove the disgraced former gangland lawyer, who gave police information about her own clients, off the bar roll. 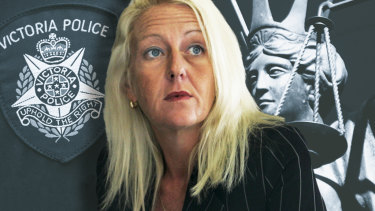 Nicola Gobbo, the former barrister who became a police informer.

Lawyer for the legal watchdog, Elizabeth Bennett, told the court on Monday morning that the board relied on Ms Gobbo's "lack of candid disclosure" when she was admitted as a lawyer. Ms Bennett also pointed to a 2018 High Court judgment that found Ms Gobbo's conduct in acting as both lawyer and police source were "fundamental and appalling breaches" of her obligations to her clients and the court.

Ms Bennett said there was a public interest in removing Ms Gobbo from the roll to "reflect our current understanding of the character of the persons on there."

And there'll be no arguments from Ms Gobbo. Her lawyer Tim Tobin SC told the court: "The defendant accepts the inevitability of her conduct requiring a sanction by the court."

The royal commission, examining Victoria Police's use of the lawyer as informer 3838, last year heard that Ms Gobbo misled the legal admissions board in 1997.

Ms Gobbo told the board of examiners in 1997 that she was "embarrassed and shocked" when police raided her house when she was a university student and found drugs. But police told the royal commission she showed them where two kilograms of amphetamines had been stashed in the laundry.

She also didn't disclose that it was a large amount of drugs that were found.

Ms Gobbo didn't tell the board that the target of the police investigation was her boyfriend, characterising him in her affidavit as a housemate.

"I had nothing to do with the drugs on the premises and I had not asked my housemate about his activities. I certainly was not involved in any drug-related activities with him," Ms Gobbo said in the affidavit.

Ms Bennett told the Supreme Court on Monday though the royal commission was yet to hand down its findings, there was a public interest in removing her from the roll "with as much expedition and as little delay that can be mustered."

Ms Gobbo had accepted, Ms Bennett said, that she will not be a "fit and proper person" to ever practise as a lawyer again.

Ms Gobbo hasn't held a practising certificate since 2014, and despite a history of complaints against her, legal proceedings about her and a royal commission, she remained on the Supreme Court bar roll.

The court maintains the roll of names of the state's barristers.

Under the Legal Profession Uniform Law Application Act, the Supreme Court can order the removal of a barrister from the roll on its own motion, or on the recommendation of a regulatory authority or tribunal.

Justice Jacinta Forbes will hand down her written reasons on Tuesday.