Pup-of-war! Amusing moment golden retriever joins a street contest during its daily walk… and helps its side to win

An energetic golden retriever has become the latest sports star in China after joining a tug-of-war session while out on its daily walk.

The active dog used its mouth to pull the rope and finally helped its side to win the street contest.

The pet abandoned its regular stroll as soon as it saw the tense game on a street of Chongqing on Monday, the organiser of the competition told MailOnline. 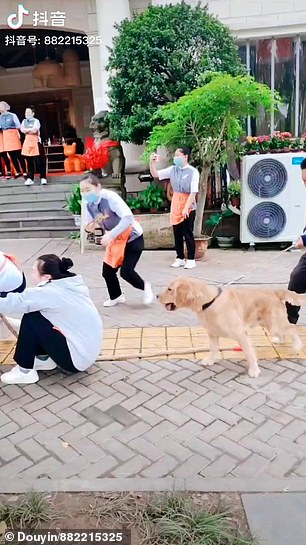 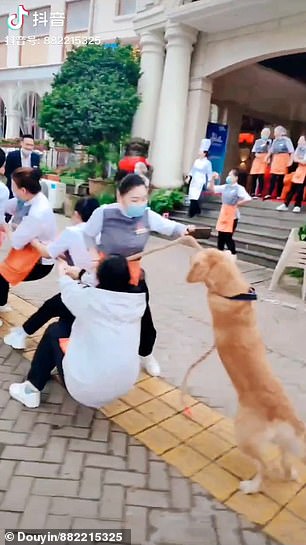 Test of strength: Footage shows the pet dog intrigued by the game and leaping eagerly to get the rope. The tug-of-war session took place on Monday in Chongqing, south-western China

Footage shows the smart pooch initially trying to reach the rope with its paws as it jumped eagerly behind two dozen competitors, who were struggling to pull their rivals over.

It eventually managed to hold onto the rope with its mouth before seemingly dragging it back with all its might, helping its team to beat the opponent.

The tug-of-war session was held by a restaurant on the pavement before the start of their staff’s evening shift. 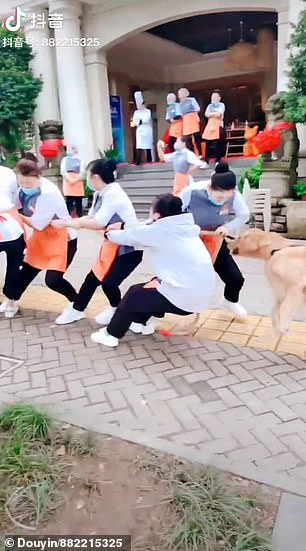 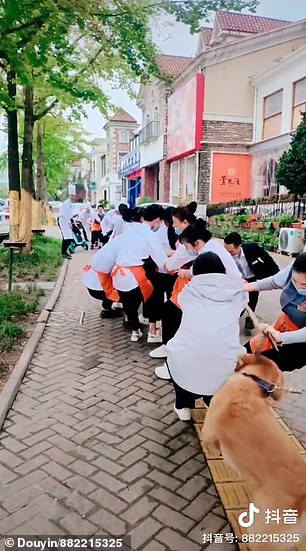 Smart move: The golden retriever is seen grabbing the rope with its mouth before pulling back

A total of 48 employees took part in the game as a warmup exercise for their work, according to Tang Yi, a manager of the Lanhujun branch of Ying Hua Du Hot Pot Restaurant.

Ms Tang, who was the referee of the game, told MailOnline that the golden retriever lived close to their store and walked past them often.

On the day of the game, the pet was intrigued by the exciting atmosphere and picked its side the second it saw them.

After assisting its teammates in winning, the dog refused to leave the site and continued to play with the rope. 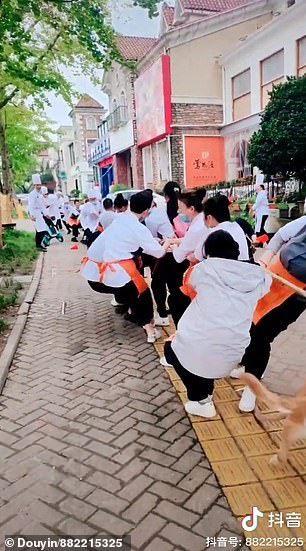 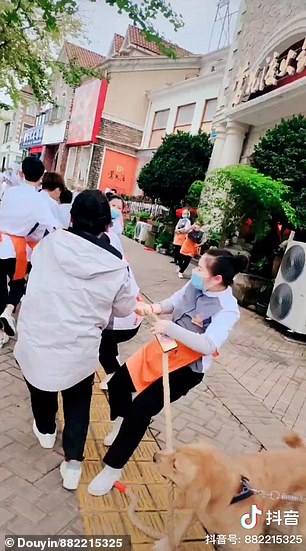 Epic performance: The 20-second clip captures the moment the pooch helping its side to win

Apparently, its passion for the sport lasted into the following days. Ms Tang said it appeared to be waiting for another tug-of-war session every time it approached the restaurant with its walker.

One of the restaurant’s workers filmed the pet’s epic performance during the contest and posted the clip onto Douyin, the Chinese version of Tik Tok, on Tuesday.

One bemused viewer joked: ‘Quick, give the furry kid a chicken leg as the reward.’

Another seemed to feel sorry for its opponent: ‘Their competitors didn’t even know how they had lost.’

A third gushed: ‘What a cute dog!’