THIS new graph reveals how close your area is to moving up or down the latest coronavirus lockdown tiers.

The chart shows the weekly Covid case detection rates per 100,000 population for each region. 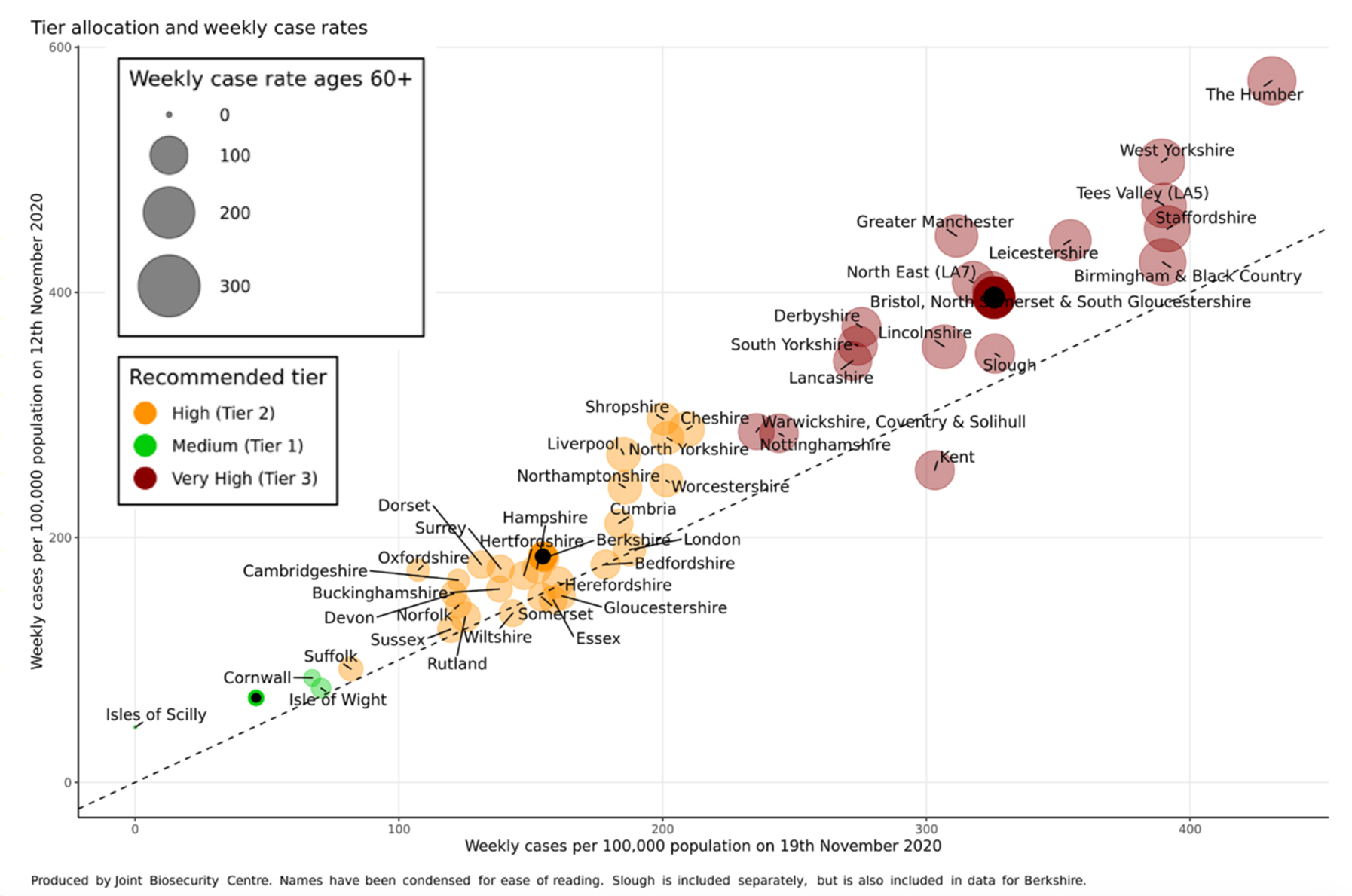 It's one of a number of data sets released by the Government justifying each area's tier allocation.

The Department of Health said decisions on tier levels would be based on several factors, including case detection rates in all age groups and, in particular, the over 60s.

How quickly case rates are rising or falling will also be taken into account, as will local pressure on the NHS, including current and projected capacity.

The graph was published as part of Public Health England's Situation Report, which states: "This chart shows some decreases in weekly case rates in the north of England, and other areas where case rates are high but declining.

"Continued improvement over the coming period may make these areas candidates for de-escalation in the New Year."

It suggests that some places may be close to moving up or down their current allocated tier when they are reviewed next month.

Suffolk is plotted only slightly above the Isle of Wight, which has been placed into Tier 1 – the lowest level of measures.

While areas including Shropshire and Cheshire, which will be in Tier 2, appear relatively close on the scale to Tier 3 areas Warwickshire and Nottinghamshire.

Bubbles above the diagonal dotted line show areas that have experienced a fall in their case rate over the past week.

The size of each is proportional to the case rate in those aged over 60, while the colour represents the tiers – 1 is green, 2 is yellow and 3 is red.

A review of the tiers is scheduled for December 16 but the Times reported the Government is not expecting to make any changes until the new year. 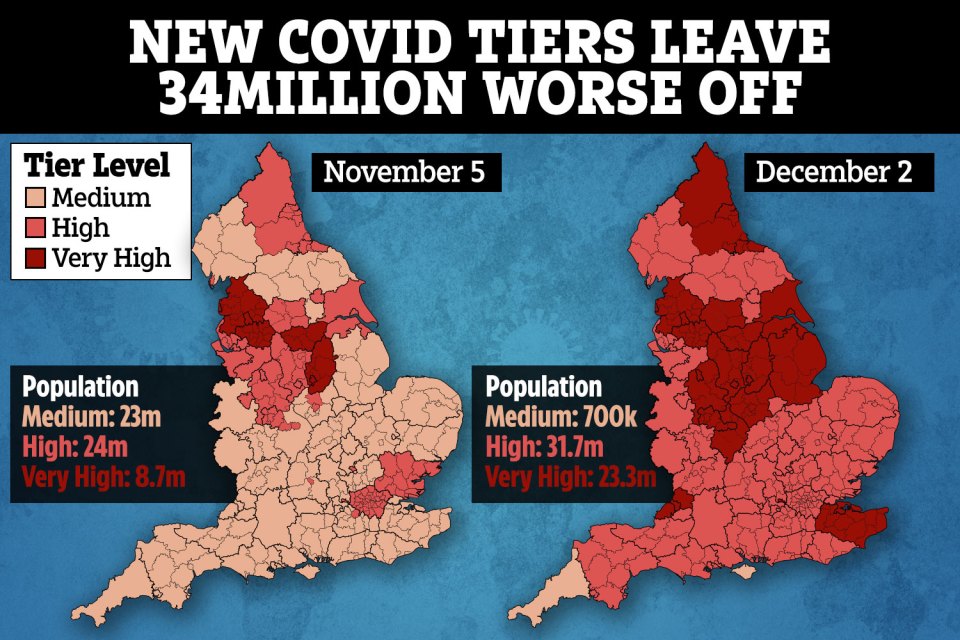 More than 55 million will be under stricter Tier 2 and Tier 3 restrictions when the national lockdown ends on Wednesday.

It means that mixing between households indoors will effectively be banned for the vast majority of the country.

Only the Isle of Wight, Cornwall and the Isles of Scilly – accounting for little more than one per cent of England's population – face the lightest Tier 1 coronavirus restrictions.

Large swathes of the Midlands, North East and North West are in the most restrictive Tier 3, which accounts for 41.5 per cent of the population, or 23.3 million people.

The majority of authorities – including London – will be in Tier 2, which will cover 57.3 per cent of the country, or 32 million people. 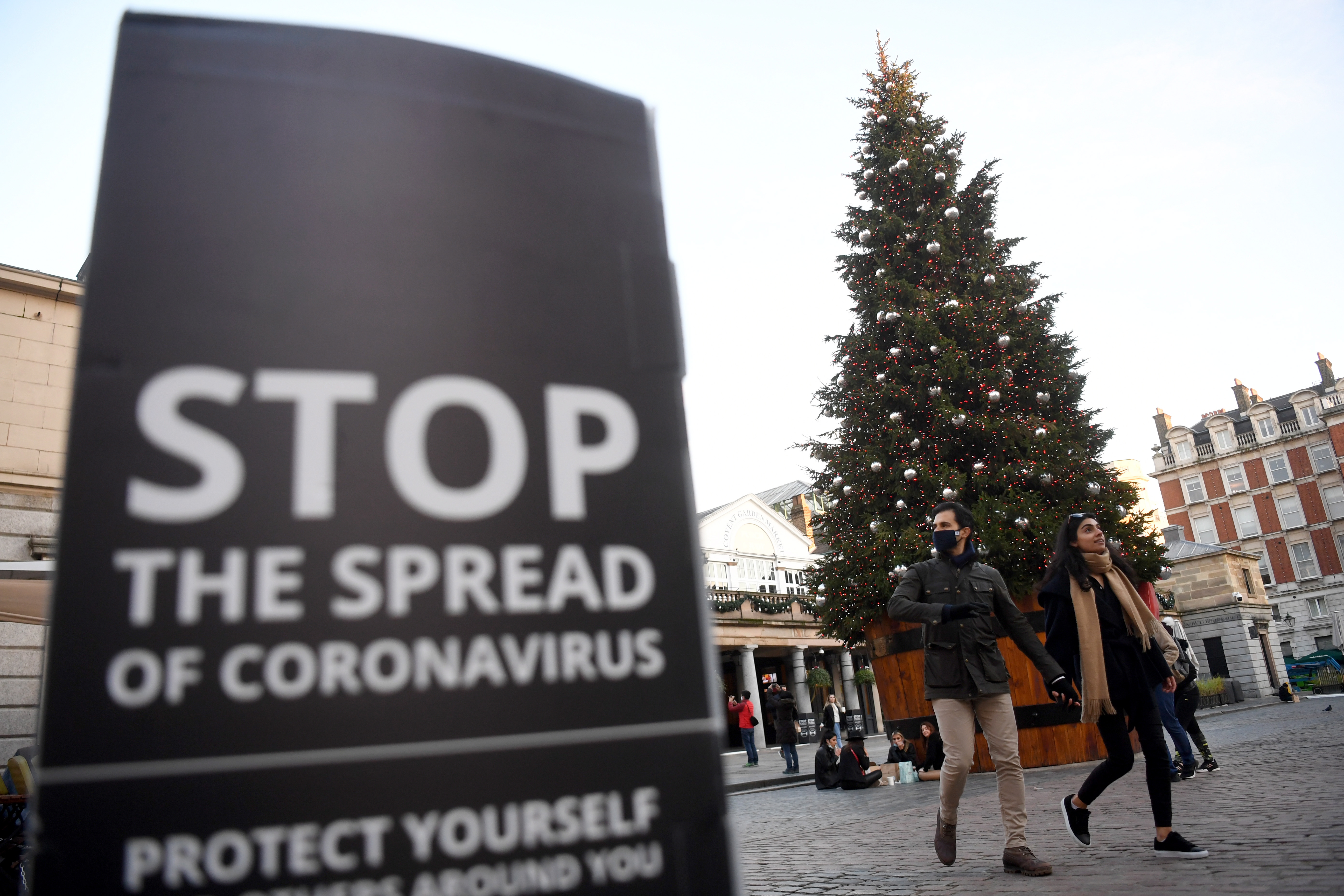 Out of those areas to go into Tier 3, only eight of 119 have reported a rise in cases.

In Tier 1, the rule of six applies indoors and outdoors but in Tier 2 there will be a ban on households mixing indoors, and pubs and restaurants will only be able to sell alcohol with a "substantial meal".

Tier 3 measures mean a ban on households mixing, except in limited circumstances such as in parks.

In these areas, bars and restaurants will be limited to takeaway or delivery services and people will be advised to avoid travelling outside their area. Shops and schools will remain open in all tiers.

Some MPs were left angered after seeing their areas escalated up two tiers compared to their status before the November lockdown.

Former cabinet minister Liam Fox and John Penrose, husband of NHS Test and Trace boss Baroness Dido Harding, criticised the move to place their North Somerset constituencies into Tier 3, having previously only been in Tier 1.

They said the reason used – due to the amount of workers in the area who commute to Bristol which has seen a recent spike in Covid-19 cases – "isn't right or fair".

Boris Johnson defended the Government's latest tiered controls for England, saying they were essential to get coronavirus down.

The Prime Minister acknowledged that many people felt "frustrated" – particularly if they were in an area with low infection rates.

"I know it is frustrating for people when they are in a high-tier area when there is very little incidence in their village or their area. I totally understand why people feel frustrated," he said during a visit to a public health laboratory in Wiltshire in a pooled clip for broadcasters.

"The difficulty is that if you did it any other way, first of all you'd divide the country up into loads and loads of very complicated sub-divisions – there has got to be some simplicity and clarity in the way we do this.

Speaking at a Downing Street press conference, he said: "The message is that the tiers worked in terms of slowing but didn't work in terms of flattening and reversing it.

"The national lockdown looks as if it has flattened it and is sending it downwards and it is important we do bring it down because numbers remain high."

Sir Patrick said one in 85 people in the country have coronavirus at the moment, numbers which he said were "very high".

Professor Chris Whitty, chief medical officer for England, said even under the new tiers system, Tier 1 would lead to an increase in infections.

He said: "Tier 1, which is very similar to the previous Tier 1, slowed things down but did not stop the rise anywhere.

"So the reason why Tier 1 at this time of year, with the current measures we currently have before we have any vaccines, is relatively limited is almost certainly anywhere going into Tier 1 will rise and the only places that are there are places with very low rates at the moment."

Earlier this week, Boris Johnson announced each of the new local Tiers have been toughed up to keep coronavirus cases under control.

And he warned "even more" regions will be placed in higher Tiers.

Downing Street this week also revealed its plan for Christmas.

Three households will be allowed to see one another indoors for five days from December 23 to December 27 and travel across the UK without restrictions for those 5 days.