Athens: A veteran Greek crime reporter was gunned down near his home in southern Athens, police said.

Giorgos Karaivaz was found dead early in the afternoon on Friday (Greek time) with several gunshot wounds beside his car in the Alimos suburb, police said. 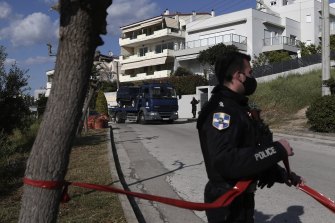 A police truck carries the car of veteran Greek crime reporter Giorgos Karaivaz, who was gunned down in southern Athens.Credit:AP

Private Star TV, for which he worked, said Karaivaz had just returned from work. It said two men on a motorcycle drew up beside him and the passenger fired at least 10 shots.

“The murder … shocked us all,” government spokeswoman Aristotelia Peloni said. “The authorities are investigating the case, to ensure the perpetrators are arrested and brought to justice.”

Authorities said Karaivaz had not requested police protection or reported any death threats.

In a career that spanned decades, Karaivaz worked for several Greek newspapers and broadcast media.