A full 50 percent of President Trump’s supporters now believe the bizarre, false claims about an international ring of child sex traffickers at the core of the extremist conspiracy theory known as QAnon, according to a new Yahoo News/YouGov poll — a disturbing sign of how susceptible partisans have become to bogus stories in an age of rampant polarization and unbridled social media.

The survey, which was conducted from Oct. 16 to 18, shows that most registered voters (55 percent) say they’ve never heard of QAnon, including 44 percent of Trump supporters. And 59 percent of voters who have heard of QAnon describe it as “an extremist conspiracy theory with no basis in fact.”

Yet these numbers understate the degree to which awareness and even acceptance of QAnon’s underlying falsehoods have permeated the right, regardless of how many unwitting adherents explicitly realize such fictions originate with QAnon itself.

Trump himself demonstrated this dynamic during his NBC town hall event last Thursday when he refused to disavow the conspiracy theory even after moderator Savannah Guthrie told him that it involves baseless lies about “Satanic” Democratic pedophile rings. 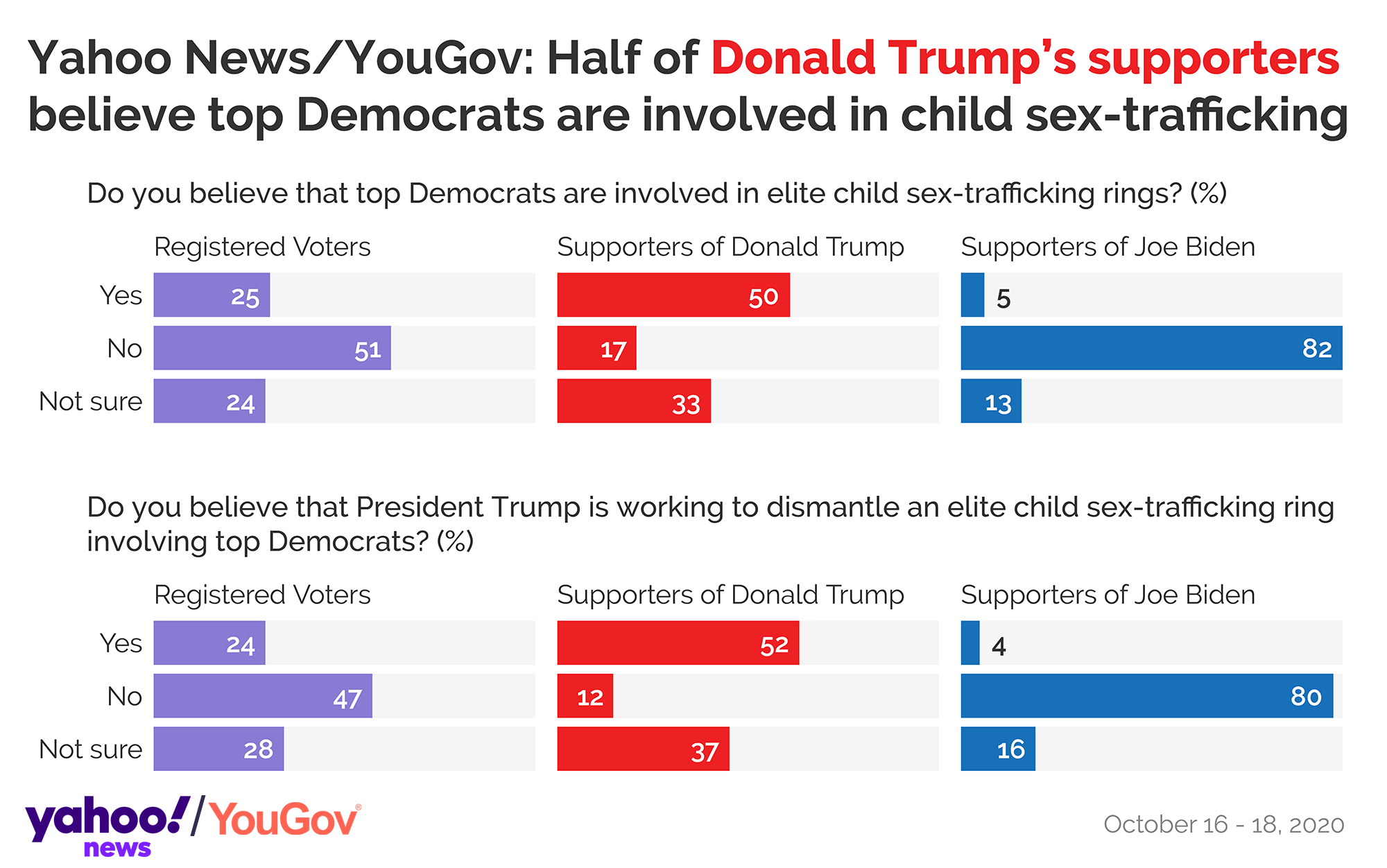 “I know nothing about QAnon,” Trump insisted — except that “they are very strongly against pedophilia and I agree with that.”

For the most part, Trump’s supporters respond the same way. Even when asked for their “opinion of QAnon,” very few of them — just 16 percent of those who say they’ve heard of the movement — are willing to call it an extremist conspiracy theory with no basis in fact. Larger numbers, meanwhile, say “it goes too far but I believe some of what I’ve heard” (22 percent) or that they’re “not sure” what to believe (47 percent). A striking 15 percent openly say “I think it’s true.”

In fact, many registered voters, including those who don’t support Trump, are unsure about QAnon or even accepting to some degree, with 7 percent of those who’ve heard of it saying it’s true; 11 percent saying “it goes too far but I believe some of what I’ve heard”; and 23 percent saying they aren’t sure.

Yet when you remove “QAnon” from the question and ask solely about the conspiracy theory’s underlying myth — that President Trump is secretly fighting elite child sex-trafficking rings run by leading Democratic politicians — far more people say they buy into it.

Among all registered voters, a quarter (25 percent) believe top Democrats are involved in elite child sex-trafficking rings; another quarter (24 percent) aren’t sure. The vast majority of Joe Biden’s supporters — 82 percent — correctly identify the notion as preposterous. 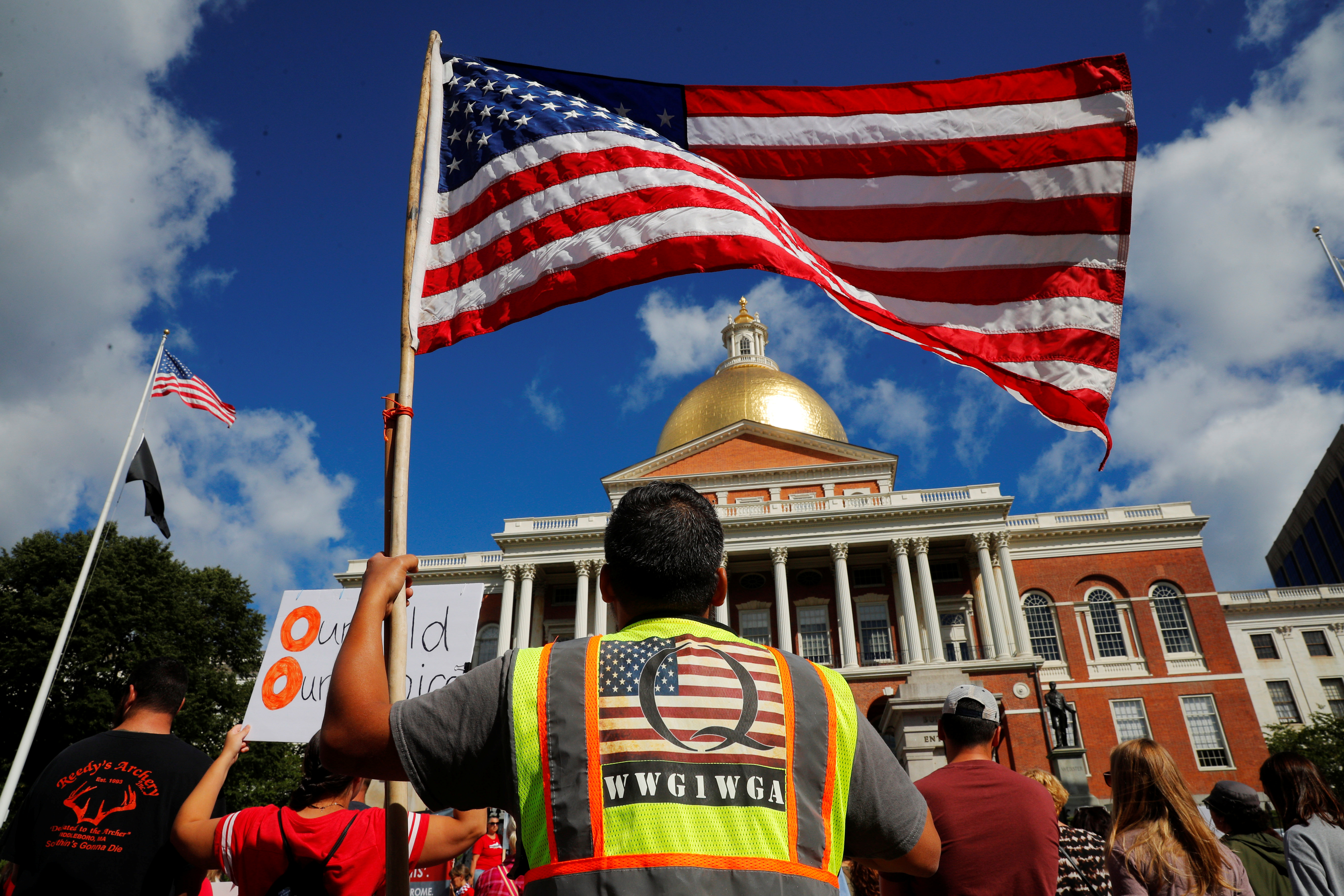 Nina Janckowicz, who studies the intersection of democracy and technology as a disinformation fellow at the non-partisan Wilson Center, said it’s “really crazy”that “such a high number” of Trump supporters believe QAnon’s core conspiracy theory.

“It seems increasingly like we’re dealing with two different sets of facts in this country, sometimes more,”  Janckowicz told Yahoo News. “The fact is that QAnon is a movement, a conspiracy that has been cited by the FBI as potentially inciting terrorist and other violent extremist acts in this country. It shouldn’t be something that we’re this split [on] along partisan lines.”

Janckowicz was one of the disinformation experts who testified last week at a virtual hearing of the House Intelligence Committee about the dangers of QAnon and other sources of misinformation online, which none of the committee’s Republican members attended, citing security concerns.

Janckowicz suggested that high levels of openness toward QAnon might be a result of the movement’s ability to manipulate social media algorithms and expand its reach — and circumvent detection — by absorbing a variety of misinformation narratives, including those surrounding the coronavirus vaccine, state lockdown measures and, most recently, efforts to spark a moral panic about child sex-trafficking with the viral #SavetheChildren hashtag.

“I think there’s a lot of cross pollination and indoctrination happening there,” said Janckowicz. Someone who encounters QAnon-related content through its anti-sex-trafficking messaging, she explained, might be less inclined to reject the movement as a whole. Likewise, QAnon is “clearly a partisan theory that supports President Trump, so Trump supporters might not be as eager to point out its inconsistencies” either. 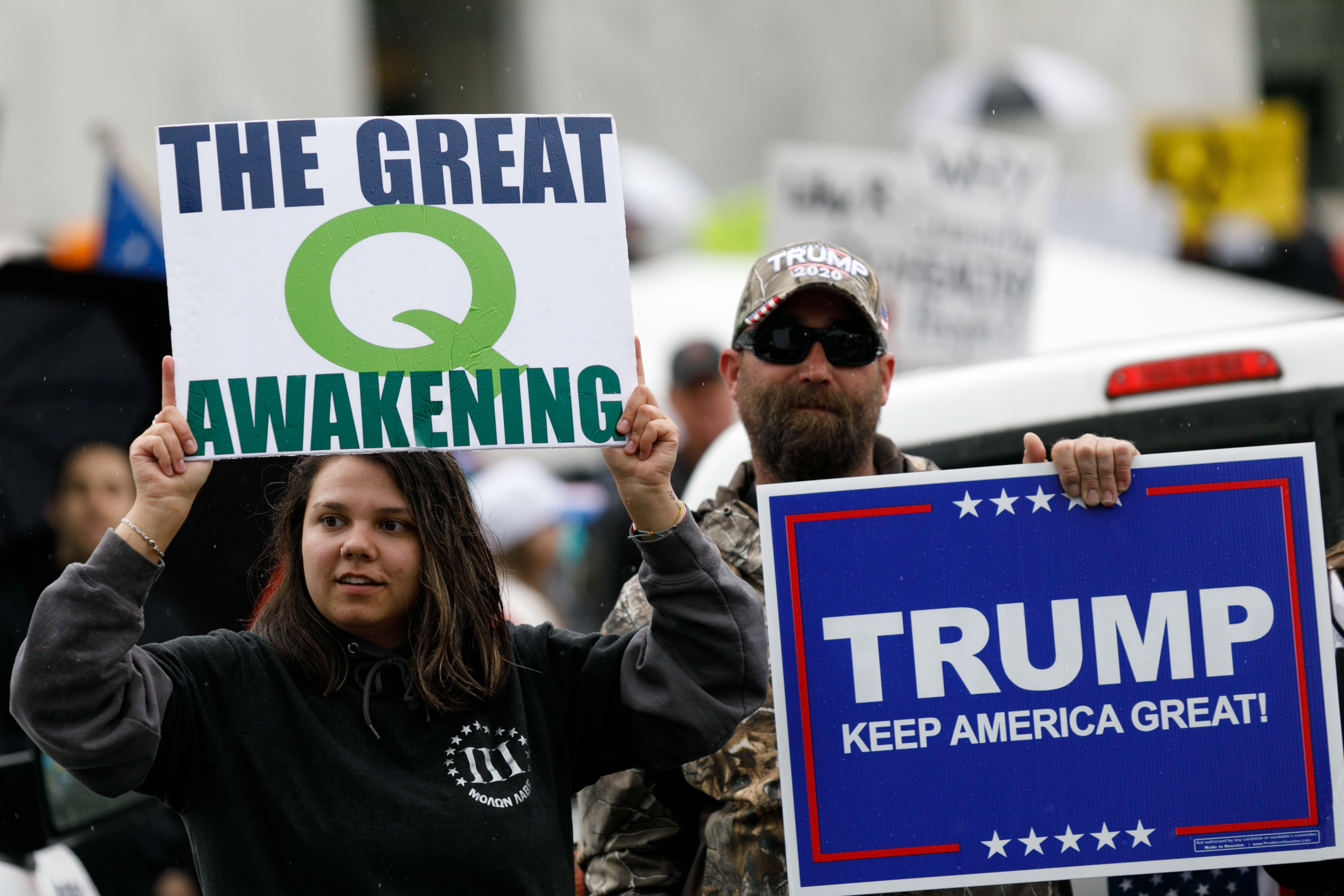 Anti-trafficking activists and law enforcement officials say that while accurate statistics on child sex trafficking are hard to pin down, the numbers spread by QAnon and #SavetheChildren are likely inflated by orders of magnitude. In reality, the movement’s false claims and misrepresentations have actually diverted resources from legitimate anti-trafficking efforts.

QAnon followers have increasingly committed real-world acts of harassment and violence, yet the social-media platforms that have fueled QAnon’s growth, such as Facebook and Twitter, have only recently cracked down on related content. YouTube finally took similar steps last Thursday.

At the same time, President Trump and other top Republicans have proclaimed their support for QAnon-linked congressional candidates,several of whom will now be on the ballot in November. At least one, a Republican in a heavily Republican district, is considered virtually certain to win. Trump has also promoted QAnon on social media.

Though QAnon may be a partisan theory, Janckowicz emphasized that countering disinformation shouldn’t be a “partisan issue.”

“The fact that we have so many political candidates who are public adherents of QAnon and a president who himself has refused to disavow the theory” amounts to a “tacit endorsement of a different set of facts,” she said. “That’s what’s really worrisome about it.”

The Yahoo News survey was conducted by YouGov using a nationally representative sample of 1,583 U.S. registered voters interviewed online from Oct. 16 to 18. This sample was weighted according to gender, age, race and education based on the American Community Survey, conducted by the U.S. Bureau of the Census, as well as 2016 presidential vote, registration status, geographic region and news interest. Respondents were selected from YouGov’s opt-in panel to be representative of all U.S registered voters. The margin of error is approximately 4.0 percent.

More from Yahoo News:
Sign up for the Yahoo 2020 Election Newsletter
Fauci on coronavirus herd immunity: ‘That is nonsense and very dangerous’
Trump, Biden campaigns approach COVID threat very differently
The 15 races that will decide the Senate, ranked
What would an inaccurate census mean for the United States?