The Health Department and its lawyers are still in the hotel quarantine inquiry’s firing line over their failure to produce critical documents.

Counsel assisting the inquiry, in submissions published this week, said it was open for inquiry chair Jennifer Coate to conclude that the conduct of the department and its lawyers from MinterEllison had “fallen short of the applicable standards throughout this inquiry", particularly in the delay in producing relevant documents.

The disclosure of more documents was sparked after new emails were obtained by The Age in October. 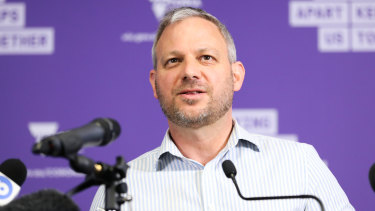 In one example of delayed documents, Chief Health Officer Brett Sutton was copied into and replied to an email chain, from March, that referred to the use of private security guards.

He accepted it appeared to be inconsistent with his evidence to the inquiry that he wasn’t aware guards were involved in hotel quarantine until a COVID-19 outbreak in the program two months later, although Professor Sutton said he took no detailed notice of the email exchange.

A letter to the inquiry from Department of Health and Human Services lawyer MinterEllison on October 19 explaining the non-production of the email chain stated that "Professor Sutton instructed us he had not read the detail of the email (referring to private security at hotels) at the time and that the evidence that he gave to the board was truthful at the time and remains so", meaning there no was need to provide the email to the inquiry.

Professor Sutton has denied any such "instruction" was made, and counsel assisting said in their final submission that "it could never be the case that a witness could ‘instruct’ solicitors as to whether a document is relevant and so should be produced. A document either falls within the scope of the notice to produce, or it does not". There was a need for "further explanation" from the law firm.

The new information provided to the inquiry, including the emails and documents that revealed disharmony in the Health Department ranks, weren't produced until after the hearings concluded and has delayed the final report, now due by December 21.

The inquiry’s lawyers accepted that the belated document disclosure was not a deliberate attempt to mislead or impede the inquiry.

The department, in a response submission prepared by MinterEllison, said the allegations that the department and its legal team fell short of the inquiry's standards were serious and “seen to lack any foundation”.

The department said it was willing to produce any documents required, but they were asked to limit production to critical documents.

The inquiry was established by Premier Daniel Andrews in July to give Victorians answers about how the second wave of COVID-19 got into the community, killing more than 800 people and plunging the state into a lockdown of more than 100 days.