Prominent law firm Minter Ellison and in-house lawyers at the Victorian Health Department have been referred to the Legal Services Commissioner for their roles in the failure to produce crucial emails to the hotel quarantine inquiry.

Shadow attorney-general Ed O’Donohue has asked the state’s legal watchdog, Fiona McLeay, to urgently investigate the lawyers involved in the decision not to provide emails related to Chief Health Officer Brett Sutton’s knowledge of and involvement in the hotel quarantine program. 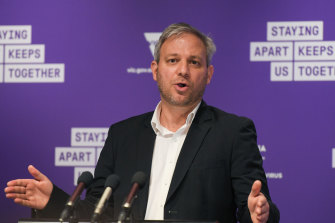 Premier Daniel Andrews has continued to express confidence in Professor Sutton in the face of escalating attacks from the Victorian Liberals, which were stepped up again on Thursday with transport spokesman David Davis calling for the Chief Health Officer's resignation.

"He should go. Today," the senior Liberal MP tweeted.

‘‘If he has sought to suppress the evidence then his position is untenable,’’ Mr Davis told The Age. ‘‘He has not managed this at all well.’’

The Age last week revealed two email chains not tendered to the board of inquiry by the Department of Health and Human Services contradicted Professor Sutton’s written and oral testimony about when he first knew of private security and the extent of his involvement in mandatory quarantine.

Board chair retired judge Jennifer Coate held an extraordinary sitting on Tuesday when her counsel assisting, Tony Neal, QC, outlined how Professor Sutton would be asked to answer further questions by providing another affidavit.

Others who have been asked by the inquiry to provide extra information about their communications on March 27 in relation to private security include Premier Daniel Andrews, Police Minister Lisa Neville and former Department of Premier and Cabinet secretary Chris Eccles.

In his letter to Ms McLeay, Mr O’Donohue said the non-disclosure of Professor Sutton’s emails was allegedly in breach of the legal profession’s regulations as outlined in the Australian Solicitors' Conduct Rules 2015.

He wrote that the conduct of the solicitors and in-house lawyers may have breached rules on misleading courts or boards of inquiry, the requirement for solicitors to act honestly, not bring the profession into disrepute and not make final submissions contrary to factual evidence.

“The alleged potential breach of professional legal conduct rules poses the question whether such practices have been prevalent in the conduct of other Victorian government departments or key witnesses within government influencing further evidence submitted, or not submitted, to the inquiry,” Mr O’Donohue wrote.

“Further, it is curious that unlike most other government departments and agencies represented at the inquiry, counsel acting for DHHS did not endorse the department’s submission.”

The department’s final submission was not signed by Claire Harris, QC, the barrister who represented it during the inquiry’s hearings in September. It was instead signed by solicitors from Minter Ellison.

The Age was unable to contact Ms Harris on Thursday.

Both Minter Ellison and the department’s lawyers have defended their conduct in relation to Professor Sutton’s emails, saying they had always acted in good faith and provided the inquiry with thousands of documents.

A letter from the DHHS legal team tabled on Tuesday revealed a departmental employee had raised the non-disclosure of the emails relating to Professor Sutton in late September.

After the non-disclosure of the emails was raised by the departmental officer, the DHHS lawyers advised the inquiry that Professor Sutton told them he stood by his previous evidence.

“Professor Sutton further instructed us that he did not consider he needed to clarify his evidence and therefore the email did not need to be provided to the board for that reason,” the legal team wrote.

After The Age published the text from the withheld emails on Saturday, Professor Sutton admitted he had read the March 27 email chain but had “not registered” the details about private security and so his evidence to the board remained truthful.

Professor Sutton, who has not appeared at the daily COVID-19 press briefing since Monday, released a statement on Wednesday saying that he had yet to receive a request to provide further evidence.

“When I do, I will respond fully to the board. I have always been completely honest and truthful with the board of inquiry and will continue to be,” he said.

Meantime, the Premier said he had no knowledge of the contents of a phone call between his office and Ms Neville which has emerged in the fresh evidence tendered to the inquiry.

Mr Andrews said on Thursday that he had become aware of the call through the work of the inquiry but declined to say which member of his staff had made it and said he did not know what was said.

"I can't speculate on what that was," the Premier said.

"We will answer the questions that the inquiry has put forward and I don't want to trample on that process."