A have-a-go hero chased away four violent burglars who he believes were trying to steal his three-month-old French bulldog puppy.

A masked gang turned up at his friend’s house in Wytheshawe, Manchester, and CCTV footage captured the moment they launched a vicious attack on him.

The man was having a cigarette on the front step while his friend and her three-year-old son, who has autism, were sleeping inside.

He heard a ‘rustling’ in the garden when the burglars turned up at around 11.15pm on Monday. 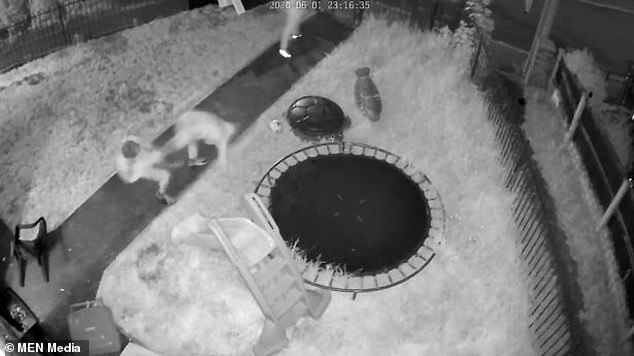 A group of four thugs attacked a man sat on a step outside his friend’s house in Wytheshawe, Manchester, after they tried to take his French bulldog

The heroic man can be heard shouting ‘lock the door’ to his friend when the four men, wearing balaclavas, run towards him and attempt to get into the house.

In a bid to protect his friend, he launches himself at the gang, tackling one of them to the ground and wrestling him while the others watch on.

The footage shows a scuffle between the man and another two men who attempted to hold him down as their accomplices enter the property.

They left the house a few moments later as the police were called.

The men then attack again, kicking the man while he was on the ground, but he manages to keep hold of one of the burglars by hanging onto his leg as the other three flee.

After the fracas, the four men drove away in a blue BMW.

The man was able to note down the car’s registration number and passed the details on to the police.

He believes the burglars were trying to steal his three-month-old French Bulldog which he had taken to his friend’s house to entertain her son.

‘There had been a large group of youths going past the garden in the day. But I didn’t think anything of it.

‘We had dinner, I took the dog out and came back. I was having a cigarette on the front step and I saw this BMW go past and park down the road. 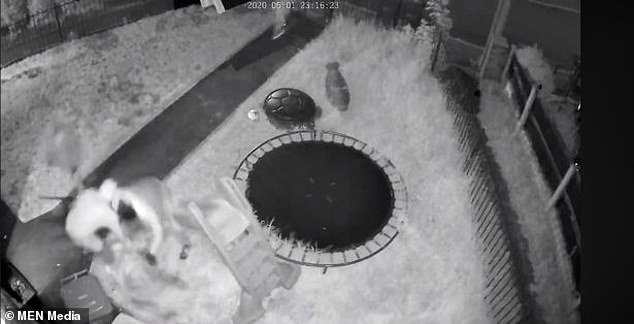 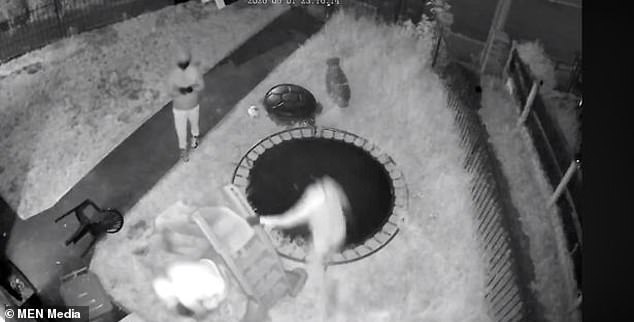 ‘I carried on smoking and I heard a rustle at the end of the garden and saw this lad in a balaclava. I shouted: ‘Yo, what’s going on?’.

‘It dawned on me that they were robbers. They got to the front door and he said: ‘Give me the dog’.

‘That’s when it started. I hit him, he hit me, the other guys got me out of the doorway. I was trying to block the door’, he added.

‘They got me out of the house and the largest of them got his arm around my neck and I ended up on the floor. They gave me a few kicks and my friend managed to lock the door.

‘At that point the plan had not gone how they wanted it to and I think they panicked.

‘The big one had still got hold of me but I thought: ‘I’ve got nothing to lose now’ and I decided to keep hold of the big one as he tried to get away.’

He said he had hoped to keep a hold of him until the police got there but he managed to get away.

The dog owner also claimed the thugs, wearing balaclavas, tracksuits and jeans, threatened to stab him.