The HIV drug combination of lopinavir and ritonavir does not treat Covid-19, a major study has concluded.

One of many experimental treatments being trialled around the world, scientists had hoped the antiviral therapy would be able to stop the coronavirus reproducing in the body, like it does for HIV.

But one of the biggest trials of promising Covid-19 drugs has now found it does not reduce patients’ risk of needing intensive care or dying, nor speed up their recovery.

A study led by Oxford University scientists insisted lopinavir-ritonavir, sold under the brand name Kaletra, is ‘not an effective treatment for patients admitted to hospital with Covid-19’.

The researchers behind the trial had actually pulled the drug out of the programme and stopped giving it to people in June because they realised it wasn’t working.

Now, results published in the medical journal The Lancet show ‘strong evidence’ that the treatment didn’t improve the condition of the 1,600 infected patients to whom it was given.

There is still no cure for Covid-19. Some drugs, such as dexamethasone, the £5 ($6) steroid given to Donald Trump, have been found to cut the risk of death among the seriously ill. But treatment for many cases remains experimental. 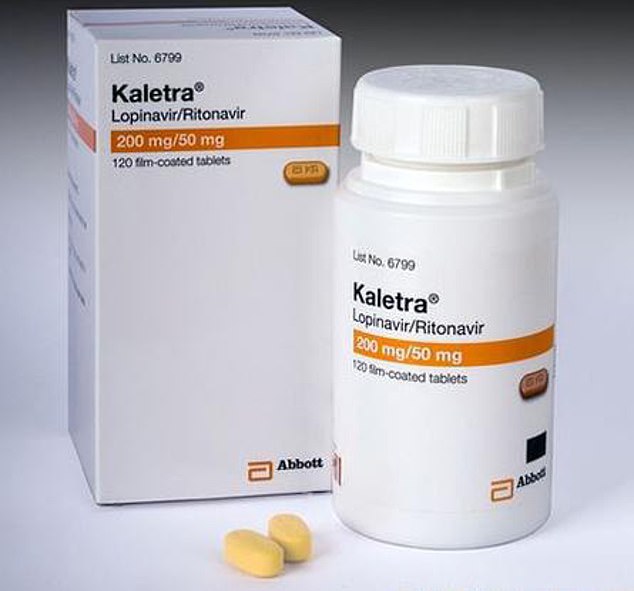 A 67-year-old coronavirus patient almost died after his heart stopped when he was given a promising drug (pictured, lopinavir/ritonavir – brand name Kaletra) in a bid to cure his disease

‘Treatment of Covid-19 with the drug combination lopinavir–ritonavir has been recommended in many countries,’ said Professor Martin Landray, an Oxford expert who is leading the RECOVERY trial which the results come from.

‘However, results from this trial show that it is not an effective treatment for patients admitted to hospital with Covid–19.

‘Since our preliminary results were made public on June 29, 2020, the World Health Organization has halted lopinavir-ritonavir treatment groups involved in its SOLIDARITY trial and reported their interim results are in line with those presented here.’

RECOVERY pulled lopinavir-ritonavir out of its trials at the end of June, as soon as there was ‘pretty clear’ evidence that it wasn’t helping coronavirus patients.

The WHO, running a global medicines trial called SOLIDARITY, followed suit less than a week later on July 4 because there was ‘little or no reduction in mortality’.

WHAT IS LOPINAVIR/ RITONAVIR?

The combination of lopinavir and ritonavir is used on HIV patients to prevent the virus developing into AIDS.

Lopinavir and ritonavir are in a class of medications called protease inhibitors.

Protease inhibitors work by sticking to an enzyme on a virus which is vital to the virus reproducing.

By doing this it blocks the process the virus would normally use to clone itself and spread the infection further.

When lopinavir and ritonavir are taken together, ritonavir also helps to increase the amount of lopinavir in the body so that the medication will have a greater effect.

The combination comes as a tablet or a solution. It is usually taken twice a day.

HIV patients in the UK were prescribed either Kaltra or ritonavir alone around 1,400 times in 2018.

Side effects can include nausea, vomiting, stomach upset, gas, headache, and trouble sleeping.

Professor Landray and his colleagues saw lopinavir-ritonavir given to 1,616 coronavirus patients in the UK and compared their recoveries to 3,424 others who were given standard care.

The median hospital stay – of which half of patients left before and half stayed longer – was 11 days for both groups.

Although there are tiny differences in the exact percentages, no difference between the groups was stronger than a random effect, the scientists decided.

Professor Peter Horby, one of the chief investigators, said: ‘The result from the RECOVERY trial is clear.

‘When combined with findings from an earlier, smaller trial and with the WHO interim results, this provides strong evidence that lopinavir-ritonavir is not an effective treatment for patients hospitalised with Covid-19.’

Patients given lopinavir-ritonavir in the trial took pills of 400mg of lopinavir and 100mg of ritonavir every 12 hours for 10 days or until they were released from hospital if that came sooner. This was the same as the standard dosage for HIV patients.

The researchers said they were not able to test the drug combination on patients who were on ventilators in intensive care because they are unable to swallow, which is how the drug is administered.

The reason scientists wanted to trial the drugs was because they are part of a class called protease inhibitors which can stop the virus reproducing.

A protease is an enzyme found on viruses which is vital for them to multiply, which is how they cause disease.

By inhibiting – or blocking – the enzyme, the drugs can stop viruses in their tracks and prevent them from spreading through the body. This is how the drug combination keeps HIV under control, although it can’t wipe it out completely.

When lopinavir and ritonavir are taken together, ritonavir also helps to increase the amount of lopinavir in the body so that the medication will have a greater effect.

The desired effect didn’t happen on patients with coronavirus, however, so trials of the drug have now been brought to an end.

Although the failure of lopinavir-ritonavir is a disappointment to hopes of finding a cure for coronavirus, the RECOVERY trial — involving thousands of patients in more than 150 NHS hospitals — has produced success, too.

It was the Oxford trial that proved dexamethasone, a cheap and accessible steroid, could cut the risk of death for intensive care patients.

That drug is now widely used around the world to treat the sickest Covid-19 patients and can cut the risk of dying by up to a third.

RECOVERY also proved that hydroxychloroquine – the anti-malarial drug that US President Donald Trump said he was taking to protect himself – does not offer any benefits to hospitalised Covid-19 patients.

The results of the lopinavir-ritonavir trial chime with what doctors in China found at the start of the pandemic.

In April, researchers from the Guangzhou Eighth People’s Hospital gave the drugs to 34 patients with coronavirus and came to the same conclusion.

Treated and non-treated patients in that study showed similar outcomes after a week and 14 days. The study found no differences between groups in the rates of fever reduction, cough alleviation, or improvement of lung inflammation.

The scientists at the time admitted their study was too small to be sure, but that there were no signs the drug would work.

They added: ‘The findings of these two open-label studies support each other and conclude that lopinavir-ritonavir is not effective in improving outcomes for patients admitted to hospital with Covid-19.’

The RECOVERY trial results on lopinavir-ritonavir are published in The Lancet, and the trial continues to test other drugs including azithromycin and tocilizumab.