Home » World News » Holiday rep, 23, did not seek medical help for injury due to cost

Holiday rep, 23, did not seek medical help for injury due to cost

Holiday rep, 23, who died after being hit by a skier during a season in the French Alps did not seek medical help because of the cost involved, inquest hears

A young holiday rep in the French Alps did not seek medical help for her head injury because of the cost, despite working in a hotel next to a doctor’s surgery.

Kayleigh Harris, 23, was hit by a skier when she was out snowboarding as she worked in a hotel at Les Menuires ski resort, an inquest heard.

Kayleigh, from Taunton in Somerset, joked ‘what a d**k’ after the accident, which left her with a small bump on her head, and refused to go to a doctor.

A coroner at the inquest in Taunton said she ‘could have at least had a chance’ if she had received medical help sooner, though there was no evidence she would have survived.

Colleagues at the Hotel Skilt said medical bills for minor injuries could easily exceed £600 – similar to a whole month’s pay. 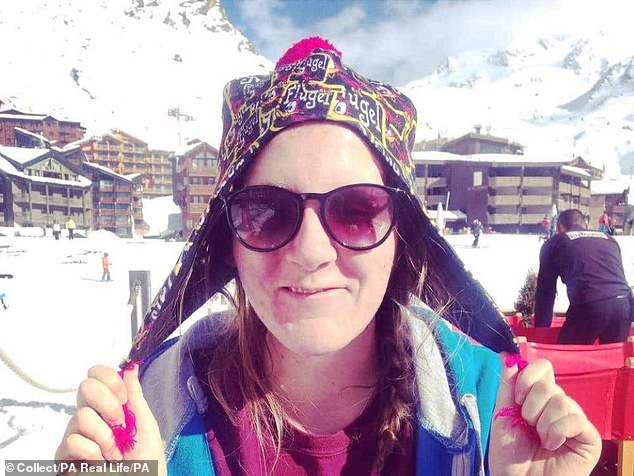 Kayleigh Harris (pictured), 23, was hit by a skier when she was out snowboarding as she worked in a hotel at Les Menuires ski resort, an inquest heard

Kayleigh became drowsy shortly after her injury but was well known to be a ‘deep sleeper’, adding a further delay to her receiving medical treatment.

The coroner said staff misinterpreted symptoms of head trauma as her normal behaviour.

The keen snowboarder, who a work colleague described as a ‘Peter Pan character’ who embraced her ‘inner child’, was working for school ski trip company SkiBound before the accident in 2016.

The skier who collided with Kayleigh was never traced, though she later told friends she thought he had a Dutch or Belgian accent when he apologised. 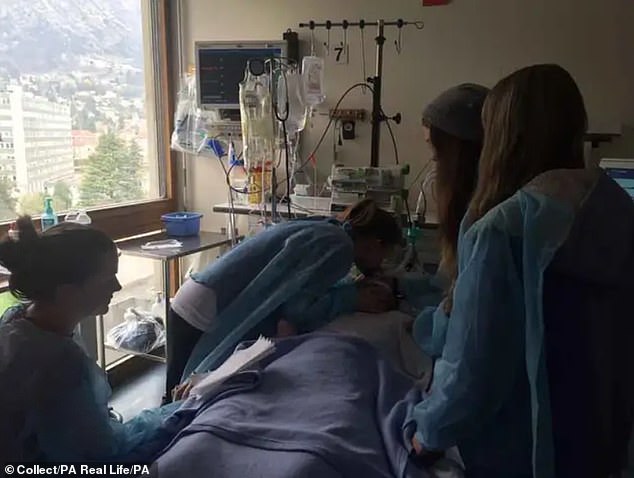 Kayleigh didn’t seek medical treatment for her head injury because she was worried about the cost, an inquest revealed. Suzanne Harris, Kayleigh’s mother, released the last picture of all her daughters together

The impact shattered a section of her helmet but there was no readily available advice from her employer about what to do in the event of a head injury.

Kayleigh only began to complain of a headache to the hotel’s head chef Seann Peters at around midnight on March 30.

Mr Peters said: ‘She was quite jovial and proud of her little bump, joking about the skier like “what a d***, I can’t believe he just skied away”.’

In a statement, Mr Peters described Miss Harris as a ‘Peter Pan character,’ adding: ‘She was 100% going to hold on to her inner child, she loved anything pink or glittery.’ 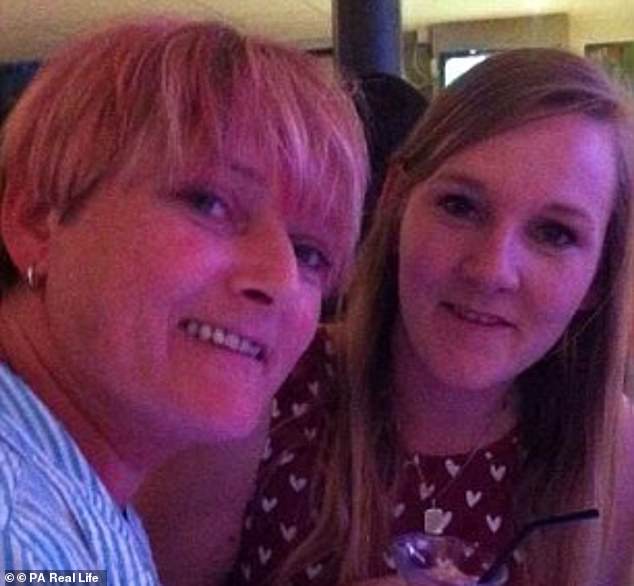 Kayleigh with her mother Suzanne, who said: ‘I don’t want to blame anyone, not even the skier. It was an accident’ 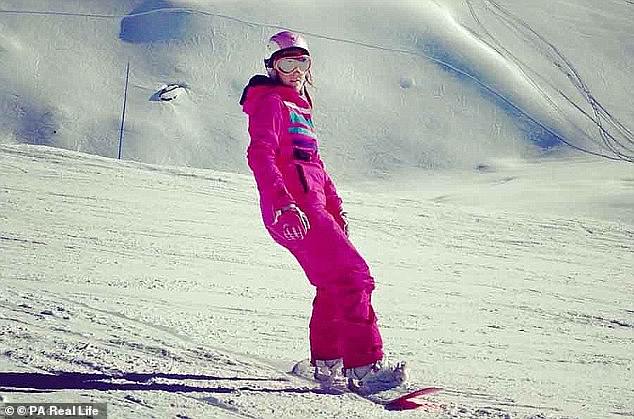 Kayleigh was a keen snowboarder. She was working with SkiBoard when she was hit by a skier in 2016, causing her to have a small bump on her head

He said Kayleigh hadn’t eaten much and declined a staff night out but that this behaviour was not unusual.

He later found her drowsy on the sofa in her room, the court heard.

Staff at the hotel feared she was concussed but chose to monitor her over the course of the night rather than call an ambulance as they knew her to be a deep sleeper.

Mr Peters said Kayleigh ‘got tired easily’ and was one of the ‘deepest sleepers’ he had ever met.

‘Kayleigh loved her sleep and would sleep for days on end if she could,’ he added.

An ambulance was called at around 8am on March 31 when Miss Harris stopped responding and was in a deep coma by the time paramedics arrived.

She suffered a cardiac arrest as she was being carried to the ambulance and had to be resuscitated on the pavement, meaning she was not taken to hospital in Grenoble until almost midday. 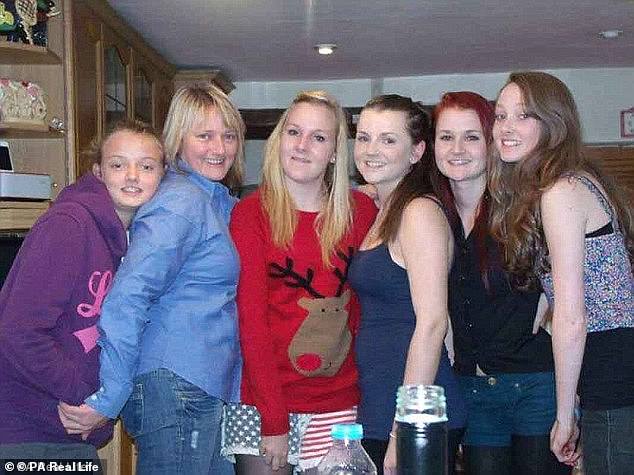 The head chef at Kayleigh’s hotel, Mr Peters, described her as a ‘Peter Pan character,’ adding: ‘She was 100% going to hold on to her inner child, she loved anything pink or glittery.’ Kayleigh, centre, before the accident with her mother and sisters. From left are Abbie, mother Suzanne, Kayleigh, Lauren, Paige and Jaide

Her life support was switched off on the evening on April 1 to allow her family time to reach her, and they made the decision to donate her organs.

The court heard Skibound has now updated its head injury policy and it is now included in the information pack given to all of its seasonal staff.

Miss Harris’ mother Suzanne Harris, a nurse, expressed her frustration at the delay to seeking medical help for her daughter and the lack of a clear head injury policy from Skibound.

She said: ‘I don’t want to blame anyone, not even the skier. It was an accident.

‘They shouldn’t be made accountable or punished, but people should just be aware (of head injuries).’

Ms Harris, who also has four other daughters, and her partner of eight years Anita Currie, 45, were on a cruise in the Caribbean, when Kayleigh messaged saying she had banged her head.

She explained: ‘I had a message from her saying, ‘Fell over, someone skied into my head, wrote off my goggles, wrote off my helmet, and my head is killing’.

‘That was the last ever message I ever received from her.’

The next day, when she had docked in Cozumel, Mexico, she received a devastating phone call from Kayleigh’s boss in France, informing her that her daughter was being airlifted to the hospital, a two hour drive away from her ski lodge.

Distraught, Suzanne called her daughter Lauren, who phoned their father, Sean Cummins, sister Paige and Kayleigh’s uncle – all of whom flew out to France.

Meanwhile, Ms Harris and her partner embarked on a nightmare journey from Cozumel to Mexico City, enduring a 10 hour wait in the airport, before flying first to Heathrow and then on to Geneva, Switzerland – then driving to Grenoble University Hospital at the foot of the mountains.

She explained: ‘During out 10 hour wait in Mexico City, my brother told me Kayleigh had no brain activity and had suffered a lack of oxygen to her brain.’

They made it to her eldest child’s side two days later, only for doctors to tell her Kayleigh was being kept alive by machines.

Listing the cause of death as head injury, Coroner Samantha Marsh said Miss Harris’ colleagues had ‘misinterpreted’ symptoms of head trauma as just her normal behaviour.

Ms Marsh said: ‘I am satisfied (Miss Harris) was encouraged to seek medical attention by friends and colleagues at the hotel and she didn’t take the opportunity to do so.

‘I am satisfied that one of the reasons she may not have done so was the prohibitive cost.’

The coroner said she had no evidence to suggest that Miss Harris would have survived if medical help had been sought sooner, but said ‘she would at least have had a chance’.