Home » World News » Honey is one of the most faked foods in the world, and the US government isn’t doing much to fix it

Honey is one of the most faked foods in the world, and the US government isn’t doing much to fix it 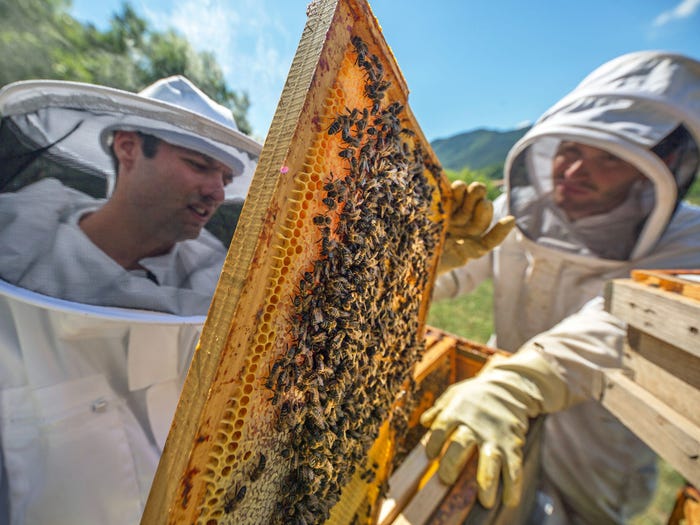 The importers — Honey Solutions and Groeb Farms — shipped fake or adulterated Chinese honey through other countries in Asia and Europe before sending them to the US.

The honey-laundering scheme, which helped the companies avoid $180 million in shipping duties, hid the honey's true origin, leaving few to suspect that it wasn't real.

It was the biggest incident of food fraud in US history.

More than seven years later, a lot of our honey is still fake.

According to the Food Fraud Database maintained by the compliance management company Decernis, it's the third-most-faked food behind milk and olive oil.

There's no reason to think that fake or adulterated honey is a threat to public health, but it's still a problem.

The manufacturers either dilute real honey with syrup derived from plants, like high-fructose corn syrup or beet syrup. Or they can chemically modify the sugars in those syrups to make them look like real honey.

Undercut by prices that can dip below half their operating costs, honey producers bear the economic brunt.

"Adulterated or fake honey depresses the price for real honey, making honey production unprofitable," Kelvin Adee, president of the American Honey Producers Association, told Insider. "Beekeepers have to turn to other sources of income such as packing and retailing honey themselves, raising queens/hives for sale or pollination services. Honey production by itself is not a sustainable option."

The exact amount of fake honey in the world is up for debate. An analysis by the Honey Authenticity Project, an association of activists and industry members, places the number of fake or adulterated honey at 33%. A 2018 study of honey for sale in Australia found that 27% of the products tested were faked or had other ingredients mixed in.

US-specific numbers are harder to come by, but one lawyer, who's behind several class-action lawsuits accusing honey brands of fraud, puts the figure as high as 70%.

Earlier this year, Vice tested honey brands in several US grocery stores and found that many of them were adulterated. But the threat extends beyond those little golden bears lining the supermarket shelves, Adee said.

Honey plays a huge role in the American diet, with about 400 million pounds of it ending up in our food every year, much of it in processed foods like cereal.

Beekeepers in the United Kingdom have been hit particularly hard. The UK received 47% of Europe's honey imports from China in 2018, but a Honey Authenticity Project lab analysis of 11 supermarket brands found that none complied with EU labeling standards.

Adulterated honey also ultimately drives honey prices down, beekeepers say. Some beekeepers find it's more worthwhile to have their bees focus on pollination rather than honey production. It's a vicious cycle that leads to less authentic honey in the market.

"When the cost of production is around $2, it's really tough to compete against prices that are well under a dollar," Adee told Insider.

"There are beekeepers who have decided to call it quits and leave the industry," he added.

And it's bad for bees, too: With pollination, bees travel more, putting hives at risk of exposure to new diseases.

The sugars in these syrups — known as C4 sugars — became popular for honey counterfeiters in the 1970s, with the invention of high-fructose corn syrup, according to Richard Anderson, director of Siratech, a private lab in Texas that detects fake and adulterated honey.

But they were soon easily detected in tests, so honey counterfeiters modified their methods to use syrups developed from plants with C3 sugars, like rice, beets, or cassava.

"[Regulators] started looking for it and catching people, so they shifted over to other types of syrups," Anderson said.

The adulterated syrups can be used to dilute a smaller batch of real honey. They can also be fed directly to bees, replacing flower nectar, Anderson told Insider.

Earlier honey authentication tests analyzed the pollen inside honey and traced them back to their source. But some honey launderers have gotten smart, treating honey so that it's difficult to trace. Anderson's lab runs SIRA tests, which are sophisticated enough to catch the large majority of attempts to falsify honey.

"They either buy pollens or blend custom made syrups with honey that already has pollen in it," Adee said. "It seems like every time there's a new test that comes out, it's not long that they'll find a way that they can beat it."

The 2013 federal investigation found that Honey Solutions and Groeb Farms had used countries like Vietnam, Thailand, India, Taiwan, Turkey, and Ukraine as intermediaries to disguise the fact that they were bringing in fake honey from China.

That practice still persists years later, according to an October 2017 report published in the American Bee Journal. The analysis compared honey imports from those countries compared to beehives and found that the numbers didn't add up.

A representative for Honey Solutions declined Insider's request for comment about the implementation of its compliance program.

Groeb Farms, Inc. filed for bankruptcy in October 2013. The company Natural American Foods — now called Sweet Harvest Foods — bought some of its assets, including its manufacturing equipment, in a bankruptcy sale.

John Rzeszut, the vice president of Marketing and Customer Development at Sweet Harvest Foods, told Insider that the company's honey is tested by Intertek, a global leader in product testing, inspection, and certification.

In a statement, Rzeszut said Sweet Harvest Foods operates under "strict oversight by a number of government and industry organizations," including the USDA and FDA, and "takes great pains to ensure traceability of the honey that we source" by testing every load of honey to confirm its country of origin.

"This testing, which is common in the honey industry, involves analyzing the pollen of the floral sources that the bees visited when collecting the nectar to make the honey," Rzeszut said. "The honey samples are sent to a world-class laboratory used by numerous industry participants in Germany and we only purchase honey that has successfully passed the traceability testing."

Since 'Honeygate,' the industry has moved toward transparency. But experts say it isn't enough.

The honey industry now has basically two ways of testing whether honey is fake or adulterated: checking its origin or checking its chemical composition.

Checking the origin of honey is relatively straightforward. If a manufacturer says honey came from one place, but lab tests show it came from another, then we know that something is wrong.

But complying with traceability certification organizations — like True Source Honey — is voluntary. And the USDA's grading system for honey isn't enforced, and doesn't require inspections to carry the "A" grade.

It's hard to know how many honey companies actually use these tests. A representative for the National Honey Board, a part of the US Department of Agriculture made up of honey industry leaders, didn't respond to requests for comment.

"Individually, the people that make up the industry, some are very interested in authenticating their honey, and I would have to say that some aren't interested," Anderson said. "The ones that have been burned don't want to get burned again, but the ones that want to buy the cheapest stuff they can find and make the highest mark-up they can make — there are those guys too."

Sweet Harvest is under oversight from the British Retail Consortium, Foreign Supplier Verification Program, and Global Food Safety Initiative. The company also conducts pollen analysis and tests every load of honey for other sugars — like cane sugar or corn syrup — to make sure they aren't adulterated. Their measures include rejecting raw honey from importers that include "unacceptable levels of foreign sugars."

Sweet Harvest is also certified by the USDA's Process Verified Program — the only honey company on there.

"USDA has audited our purchase records, inspected our facilities, and visited the facilities of our suppliers overseas to ensure that we are following proper traceability protocols," Rzeszut said.

When asked about testing honey imports, the USDA directed Insider to the Food and Drug Administration, the department responsible for enforcing the Food, Drug, and Cosmetics Act.

FDA press officer Peter Cassell told Insider that it can deny or detain honey imported into the US without physical inspection. From there, the company must get they honey tested — often from a third-party lab — to support approval for import. The FDA doesn't run its own verification tests.

"There are a number of steps that companies go through to offer products for import to the U.S. market and it's the responsibility of the company to follow these processes," Cassell wrote in an email.

But the FDA has its own challenges.

For honey, it requires additives to be listed as ingredients, but has no legal enforcement mechanism for those rules, The Economist reported.

The agency also doesn't have a great definition for authentic honey in the first place, leaving ambiguity that allows manufacturers to harvest honeycombs before the honey fully ripens, according to The Economist.

The FDA only acts against honey manufacturers if it detects a potential food safety issue.

And while fake honey may seem like a scam for consumers, and may be harmful for the industry, there's no evidence it's unsafe. Consumers just have to take the private sector's word for the unadulterated truth.

Related News:
TV and Movies
60 Minutes host gets death threats after Trump interview
Mom EP Teases Christy's Fate In Wake of Anna Faris' Departure
Khloe Kardashian Tests Positive for Coronavirus in Keeping Up With the Kardashians Sneak Peek
The Surprising Reason Kit Harington Was Not a Fan of the 'Game of Thrones' Books Before He Was Cast as Jon Snow
'90 Day Fiancé' Star Kalani Faagata Gives Update on Her Relationship After Marital Woes With Asuelu Pulaa
Recent Posts
This website uses cookies to improve your user experience and to provide you with advertisements that are relevant to your interests. By continuing to browse the site you are agreeing to our use of cookies.Ok