Hong Kong: Seven pro-democracy advocates were convicted on Thursday for organising and participating in an unlawful assembly during massive anti-government protests in 2019 as Hong Kong continues its crackdown on dissent.

The seven activists include media tycoon and Apple Daily chief Jimmy Lai, as well as 82-year-old Martin Lee, a veteran of the city’s democracy movement. Lai had already been held without bail on other charges.

Lee, who helped lead the pro-democracy camp during the former British colony’s transition to Chinese rule, was convicted in a court in the West Kowloon area along with Lai and fellow activists Albert Ho, Leung “Long Hair” Kwok-hung, Lee Cheuk-yan, Cyd Ho and Margaret Ng. It was unclear when they would be sentenced. 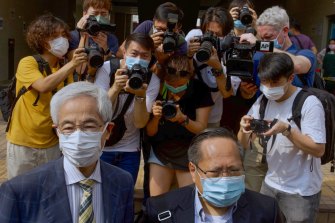 The activists were convicted for their involvement in a protest held on August 18, 2019. Organisers of the protest say that 1.7 million people marched that day in protest of a proposed bill that would have allowed criminal suspects to be extradited to mainland China for trial.

Ahead of the trial, supporters and some of the defendants gathered outside court, shouting slogans such as “Oppose political persecution” and “Five demands, not one less,” in reference to demands by pro-democracy supporters that include amnesty for those arrested in the protests as well as universal suffrage.

“So on this day, in a very difficult situation in Hong Kong, political retaliation is on us,” said Lee Cheuk-yan, one of the defendants ahead of the court session. 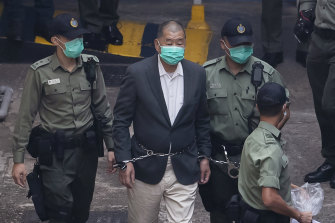 Hong Kong pro-democracy activist and media tycoon Jimmy Lai is escorted to a prison van before appearing in a court, in December.Credit:AP

The verdict is the latest in a series of historic setbacks in recent weeks for Hong Kong’s pro-democracy camp. The group on trial comprised veteran activists who have for years supported causes such as human rights and women’s rights and organised vigils commemorating the 1989 crackdown on student demonstrators in Tiananmen Square.

Hong Kong was rocked by months of protests in the second half of 2019, sparked by the extradition bill. The bill was eventually withdrawn, but the protests expanded to include full democracy and other demands and at times descended into violence between protesters and police.

In the aftermath of the protests, Beijing has taken a tougher stance on dissent, implementing a national security law on Hong Kong and approving electoral reforms that would reduce the public’s role in voting in lawmakers for the city’s legislature.

Taking part in an unlawful assembly or a riot in Hong Kong can result in a maximum sentence of up to 10 years imprisonment for serious offences.

Hong Kong police have swept up many of the city’s established opposition leaders among the more than 10,000 activists arrested since the protests erupted in June 2019. Some, such as Lai, face multiple prosecutions, including charges under the national security law.

Lai, 73, faces other charges under Hong Kong’s new security laws as well as fraud charges that he denies.

He has pushed other countries to punish China for its erosion of freedoms in Hong Kong. He travelled to the United States in 2019 to meet officials including then vice-president Mike Pence. And he has called for sanctions on Chinese officials.

Lee, a London-trained lawyer, has stoked Beijing’s ire for more than three decades, dating back to his support for the Tiananmen Square protests and subsequent defeat of the pro-establishment camp in Hong Kong’s first direct legislative elections. He sat on the committee that drafted Hong Kong’s post-handover charter, founded the Democratic Party and served as a lawmaker until his retirement in 2008.

Chinese authorities have accused him of being a “traitor” for testifying before the U.S. Congress, and in August 2019 labelled him as part of a “New Gang of Four” in a publication under the Communist Party’s top legal body. The piece also named Lai and Ho, a former Democratic Party leader and chief executive candidate, as members of the “gang” – a reference to a Communist Party faction jailed for attempting to seize power after Mao Zedong’s death in 1976.