Hong Kong pro-democracy newspaper Apple Daily will be forced to shut ‘in a matter of days’ after authorities froze the company’s assets under a national security law, an adviser to jailed owner Jimmy Lai said Monday.

The closure of Apple Daily would undermine the former British colony’s reputation as an open and free society and send a warning to other companies that could be accused of colluding with a foreign country, media advocacy groups said. 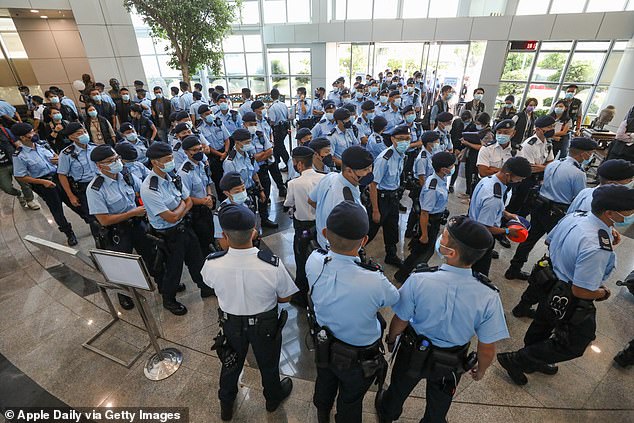 Hong Kong pro-democracy newspaper Apple Daily will be forced to shut ‘in a matter of days’ after authorities froze the company’s assets under a national security law, an adviser to jailed owner Jimmy Lai told Reuters on Monday. Pictured: Police officers raided the newspaper’s office on June 17 in Hong Kong

Next Digital, publisher of the top-selling 26-year-old newspaper, would hold a board meeting on Monday to discuss how to move forward after its lines of credit were frozen, Mr Simon said.

‘Vendors tried to put money into our accounts and were rejected,’ he said by phone from the United States.

‘We thought we’d be able to make it to the end of the month. It’s just getting harder and harder. It’s essentially a matter of days.’

Apple Daily said on Sunday the freezing of its assets had left the liberal newspaper with cash for ‘a few weeks’ for normal operations.’

Chief Editor Ryan Law, 47, and Chief Executive Cheung Kim-hung, 59, were denied bail on Saturday after being charged with collusion with a foreign country. 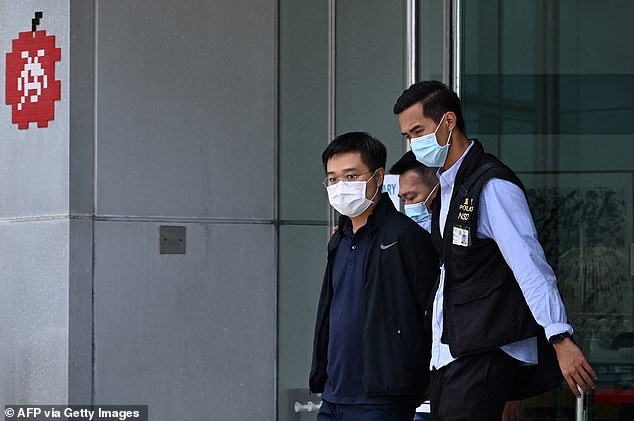 Chief Editor Ryan Law, 47, (pictured being arrested on June 17) and Chief Executive Cheung Kim-hung, 59, were denied bail on Saturday after being charged with collusion with a foreign country

Three other executives were also arrested on Thursday when 500 police officers raided the newspaper’s offices, drawing condemnation from Western nations, global rights groups and the U.N. spokesperson for human rights.

Those three are still under investigation but were released from police detention.

Hong Kong and Chinese officials said press freedom cannot be used as a ‘shield’ for those who commit crimes, and slammed the criticism as ‘meddling.’

In May, Reuters reported exclusively that Hong Kong’s security chief had sent letters to tycoon Mr Lai and branches of HSBC and Citibank threatening up to seven years’ jail for any dealings with the billionaire’s accounts in the city.

A Hong Kong-based spokesperson for Citibank said at the time the bank did not comment on individual client accounts. HSBC declined to comment.

Authorities are also prosecuting three companies related to Apple Daily for alleged collusion with a foreign country and have frozen HK$18 million ($2.3 million) of their assets.

‘We can’t bank. Some vendors tried to do that as a favour … and it was rejected.’

The newspaper has come under increasing pressure since owner and Beijing critic Lai, who is now in jail, was arrested under the national security law last August and has since had some of his assets frozen.

Apple Daily plans to ask the government’s Security Bureau to unfreeze the assets on Monday and failing that attempt, it may look to challenge the decision in court.

Police have said dozens of Apple Daily articles were suspected of violating the national security law, the first case in which authorities have cited media articles as potentially violating the legislation.

Mr Simon said that based on his understanding from officers’ questioning of the executives, around 100 articles were under scrutiny.

‘After all this is said and done, the business community is going to look up and recognise that a man’s company was gutted and stolen by a communist regime in Hong Kong,’ he said.