I am inspired by Ebeneezer Scrooge and I refuse point-blank to pay for stamps: How I saved a packet (and beat the post strike) by hand-delivering my Christmas cards this year

Every year it’s the same. The festive season slowly creeps up on you – and suddenly it is panic time. A last-minute rush to post Christmas cards.

But not this year. With a cost-of-living crisis, I am trying a new approach. After queueing at the post office to be told 50 first-class Christmas stamps cost £47.50, I am inspired by Ebenezer Scrooge and refuse point-blank to pay.

My penny-pinching decision was made in the face of Royal Mail strikes that led to reports yesterday that some Christmas cards might not arrive until February.

I fear a first-class stamp, which went up by an inflation-busting 10p last April to 95p, will not guarantee my card is delivered until after Christmas Day, although officially the last posting date is Friday. 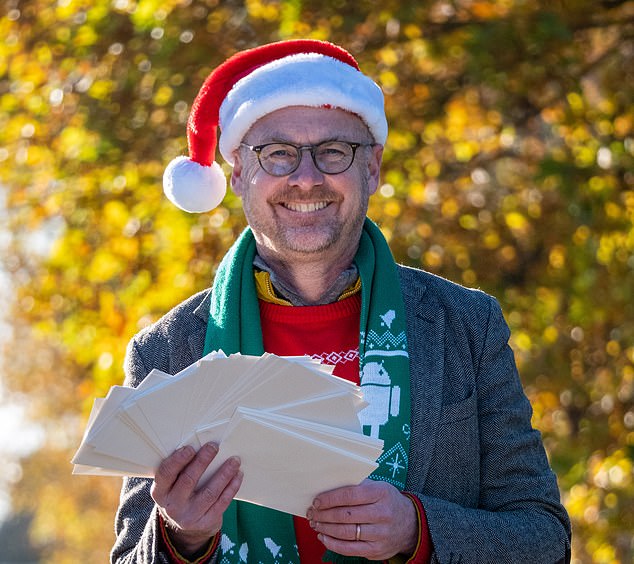 Every year it’s the same. The festive season slowly creeps up on you – and suddenly it is panic time. A last-minute rush to post Christmas cards. Pictured: Mail on Sunday reporter Toby Walne

With rough calculations made on an envelope, I figure it works out cheaper to leap into my gas-guzzling Lotus Elise – which does 32 miles to the gallon – and drop off most cards by hand. A £7.20 gallon (£1.58 a litre) is hopefully enough to drive around the Hertfordshire and Essex countryside near my Bishop’s Stortford home with a Christmas postbag.

The results prove not only surprisingly cost-effective but reveal how posting in person is priceless – delivering the true spirit of Christmas as well as saving money on postage.

Rather than immediately jumping into the car, I start with a scenic mile-long walk to visit neighbour Allan Chapman in the village of Albury. The bright, chilly morning lifts the spirits and I’m getting much-needed exercise before the over-indulgence of Christmas. I feel an extra spring in my step walking smugly past a postbox, knowing I didn’t spend £47.50 on stamps.

The ground frost means it is still below zero, but I have a thick Christmas jumper and scarf, plus a fetching Santa hat, to keep warm.

Knocking on the door at 9am sharp, I am told by Allan’s partner Kath that he is not around to play. We share plenty of hobbies, such as beekeeping, stargazing and drinking his alcohol – when his party trick is turning cheap white wine into ‘quaffable’ champagne (it involves a SodaStream).

But Kath still greets me with a smile that reminds me how visiting in person is far more rewarding than communicating by post, email, text or social media.

Delving into my Santa postbag, I pull out a card. It’s a brief meet-up, but Kath is appreciative of my effort and hands me a jar of honey from Allan’s bees as a gift that he usually sells for £6.

A dozen nearby drop-offs later – as I push cards through letterboxes rather than knock on the door – I am in the car heading ten miles north. My friend Paul Lucas has just moved and I promised to see him. Finally, the opportunity for a visit that might otherwise never happen.

The drive along icy country lanes requires both eyes on the road – and those deer warning signs are not for spotting Rudolph. Rather than the usual grind of dashing from A to B for work or shopping, it is surprisingly enjoyable having a task that only spreads joy.

Paul, a classic-car dealer, has saved my bacon on countless occasions. Coming to the rescue when the gear-stick of my old Sunbeam Alpine came off in my hand and, another time, helping push the car back home after a wheel fell off – using a skateboard. Visiting in person cements a friendship and business relationship that means he is always there to help. 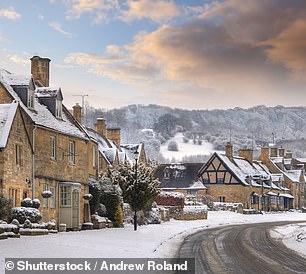 As I pull up at Lucas Sports Cars, Paul brings out a tray of mince pies freshly baked by wife Jenny. He gives me another treat after I press the festive card into his hand: a view of a rare, fuel-injected Triumph TR5 from 1968 that he has spent two-and-a-half years restoring.

As I imagine how my wife would react to me blowing the pension pot, the low fuel light on the car provides a wake-up call. I have already driven 15 miles and there’s five more to the next stop, so my £7.20 petrol budget is looking tight.

Off I set, dropping off cards on my route, meaning I have delivered a couple of dozen by midday.

The CD A Jolly Christmas From Frank Sinatra is playing on the car stereo, reminding me how the personal touch is so important.

Tommy Moore lives on his own and is not in the best of health. Aged 90, the retired RAF ground crew worker had a heart attack and stroke four years ago but remains fiercely independent. He takes his time answering the door, but I am in no rush.

He says: ‘I rarely get visitors these days as everyone seems so busy. So it is welcome to see a friendly face – even if it is yours.’

I hand Tommy my hand-made Christmas card, featuring my painting of a sheep. He stares at it for some time, admitting cataracts are making it hard to see. He says: ‘Is it some kind of animal?’

We laugh at his brutal assessment. It is a priceless moment. Spending time with Tommy was a treat, though I didn’t linger, as a further 15 cards had to be thrust through letterboxes. Forty cards are posted by 2pm.

Driving home, I work out that I have saved £40.75 posting cards by hand rather than trusting the Royal Mail – driving 30 miles delivering 40 cards cost £6.75 in petrol.

Of course, not everyone I want to send cards to lives within easy driving distance. But if I post the ten remaining cards second class, it will cost me only a further £6.80. That still means a total saving of £33.95.

I’m not adding labour, but the Christmas cheer added by hand-delivering cards is easily the richest reward of all.