HUNDREDS of maskless "Back the Blue" fans were seen rallying before Trump's Covid comeback speech to thousands at the White House on Saturday.

Trump will speak to thousands of supporters at the event, said to be a protest to show support for "law and order" – despite his not having yet tested negative for coronavirus. 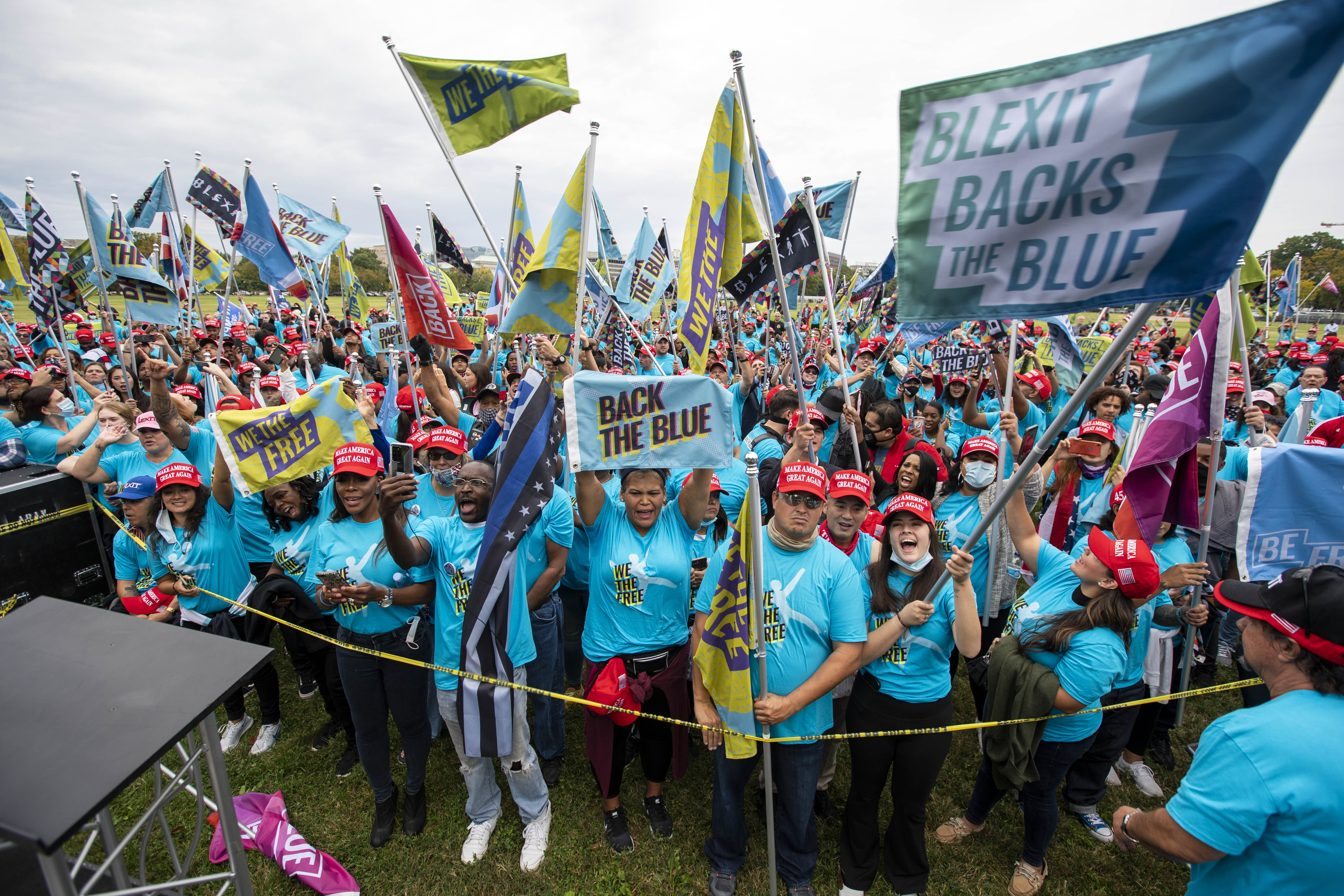 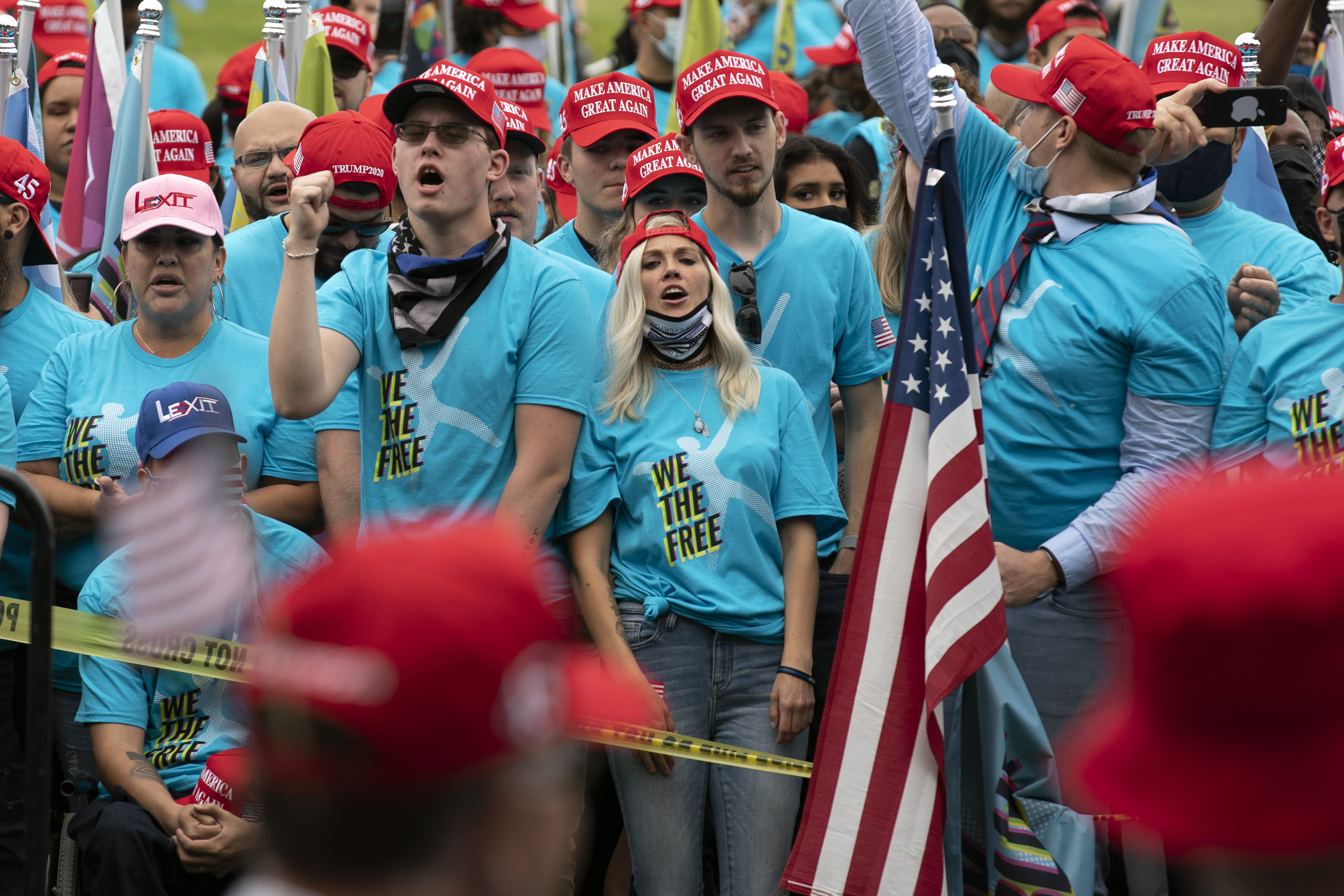 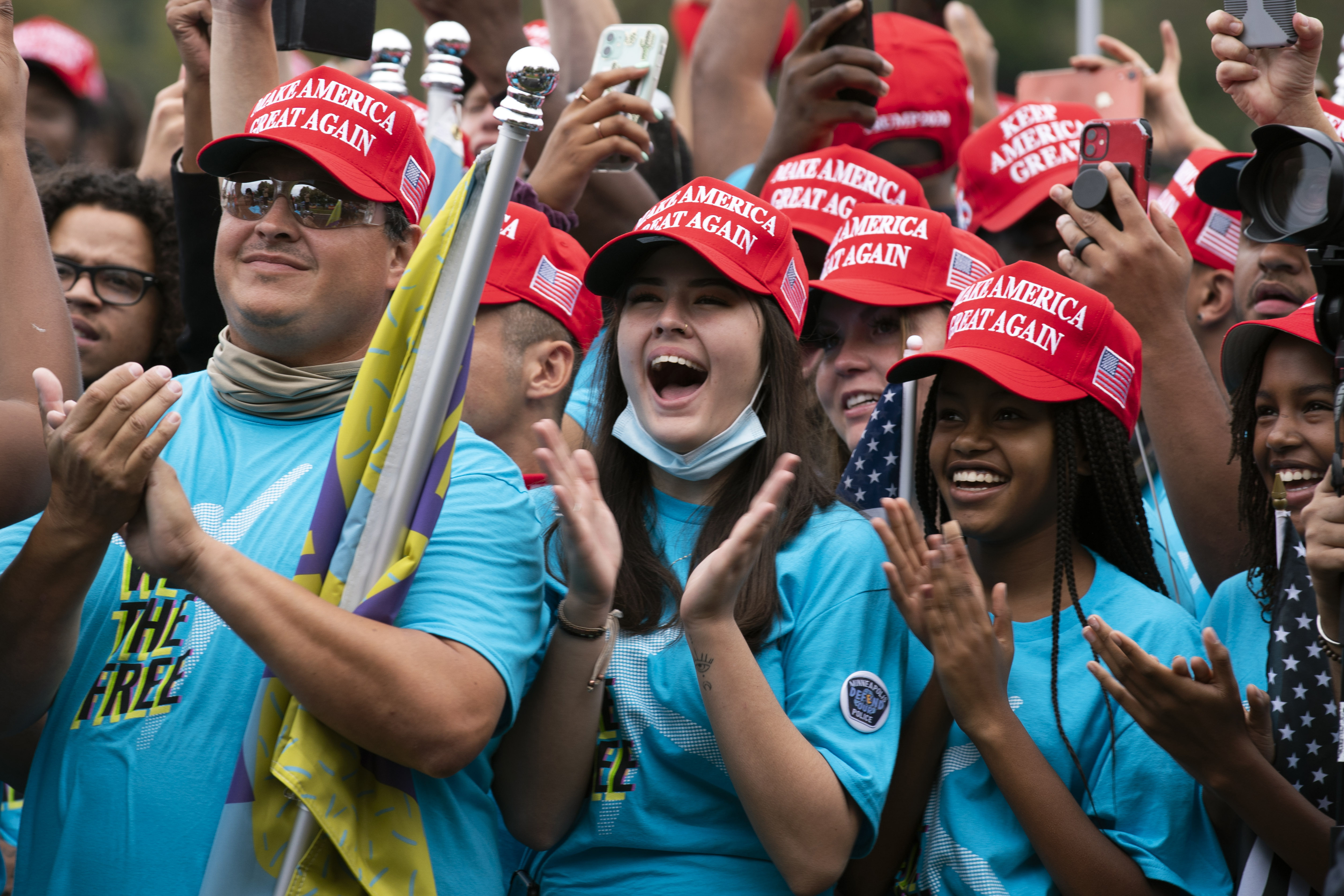 Supporters were seen holding signs that read "BACK THE BLUE" and "WE THE FREE."

Many were not wearing masks or social distancing, pictures show.

Trump's schedule shows he will speak at a peaceful protest for law and order on the South Lawn at 2pm EST.

He is set to speak to thousands despite potentially being contagious with Covid.

"We're making sure we're taking precautions so that those in attendance are screened before they come in," White House communications director Alyssa Farah told reporters on Saturday. 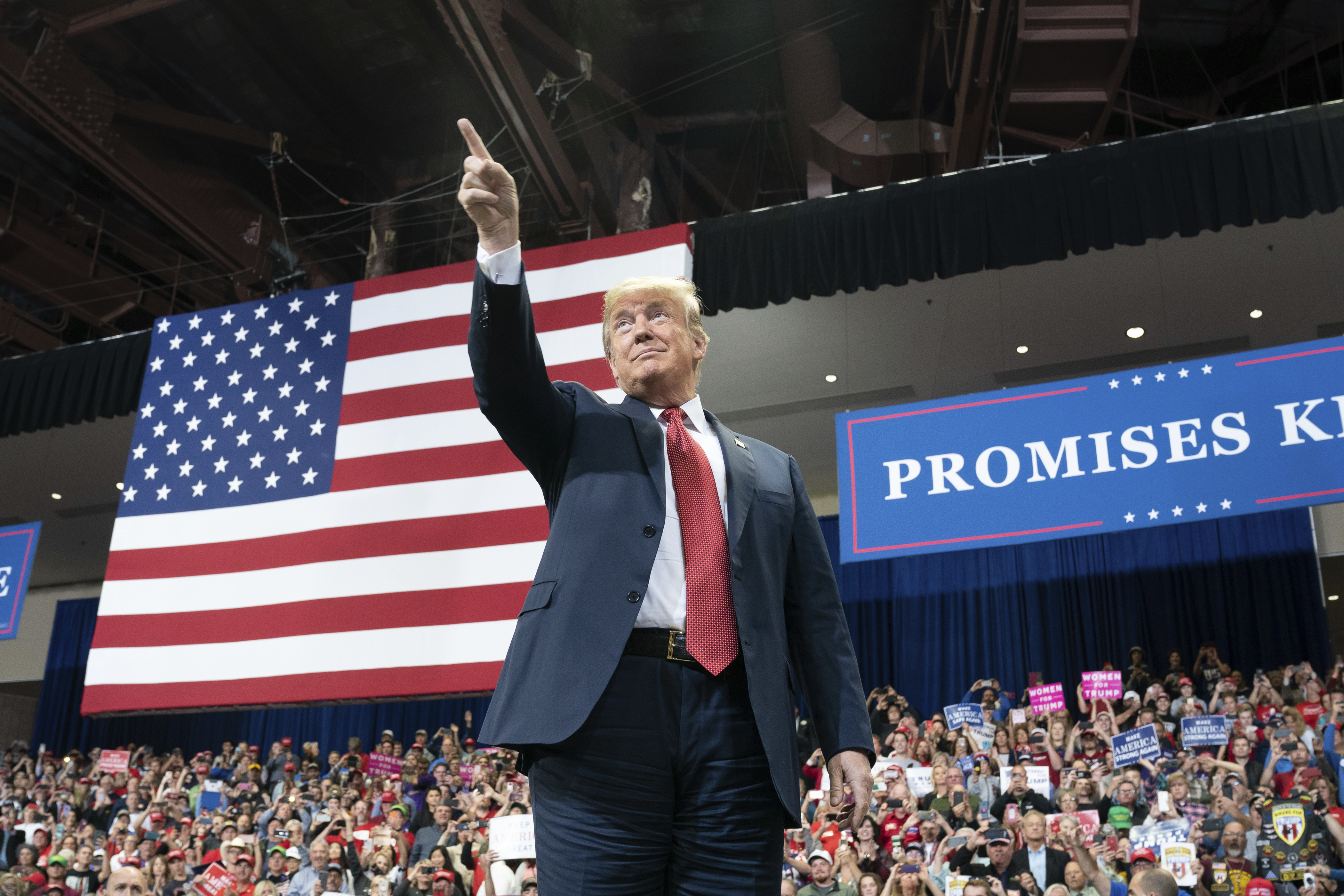 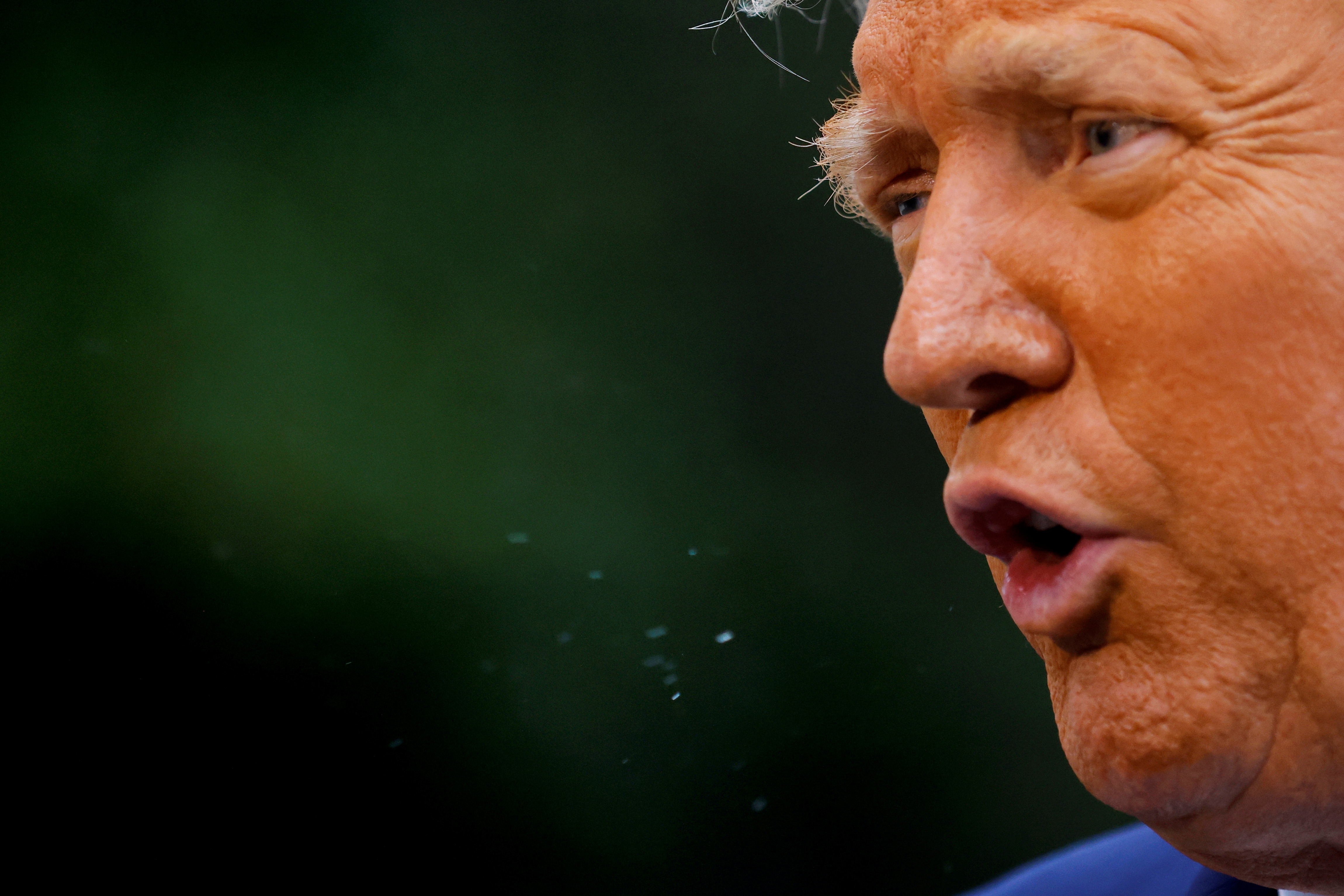 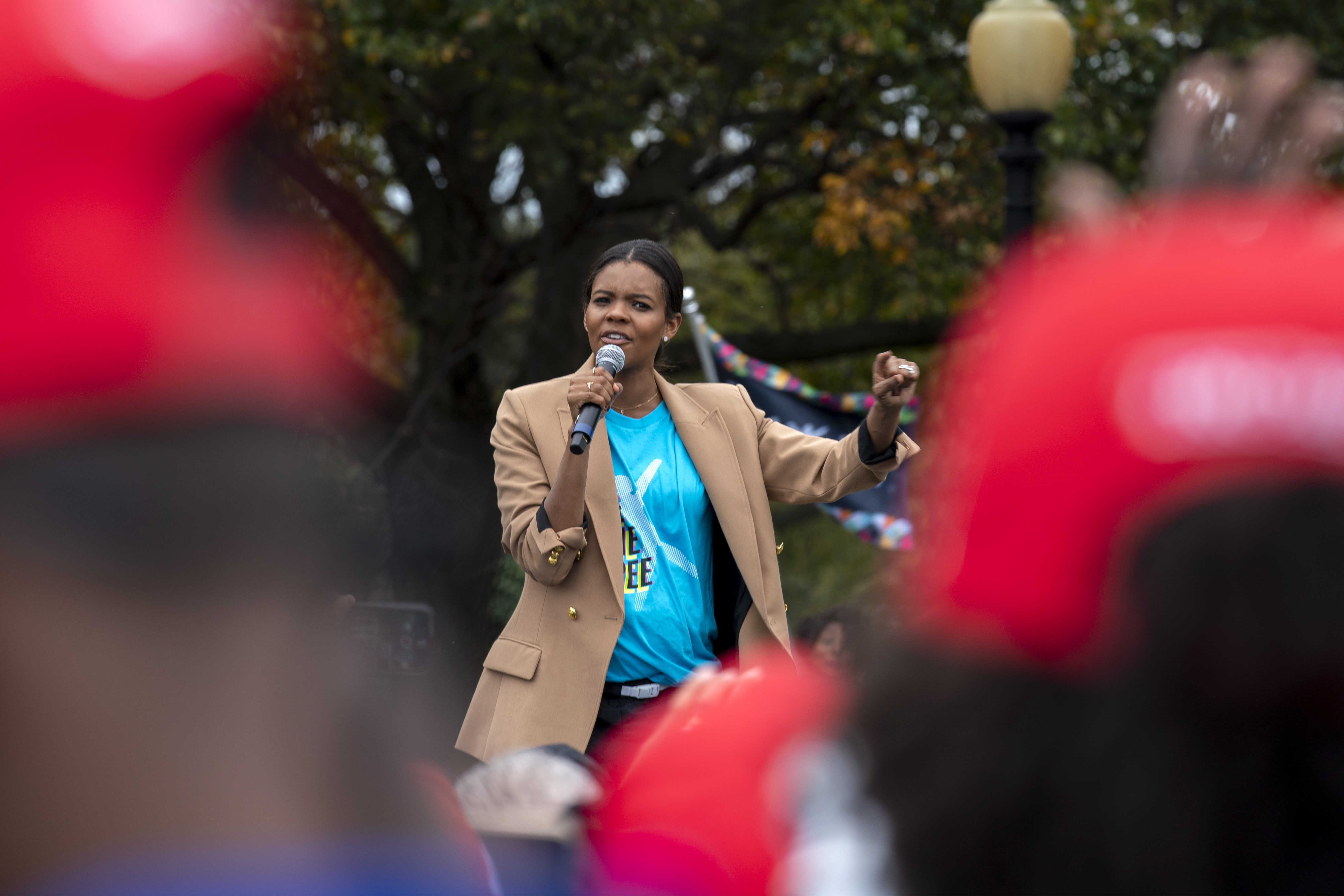 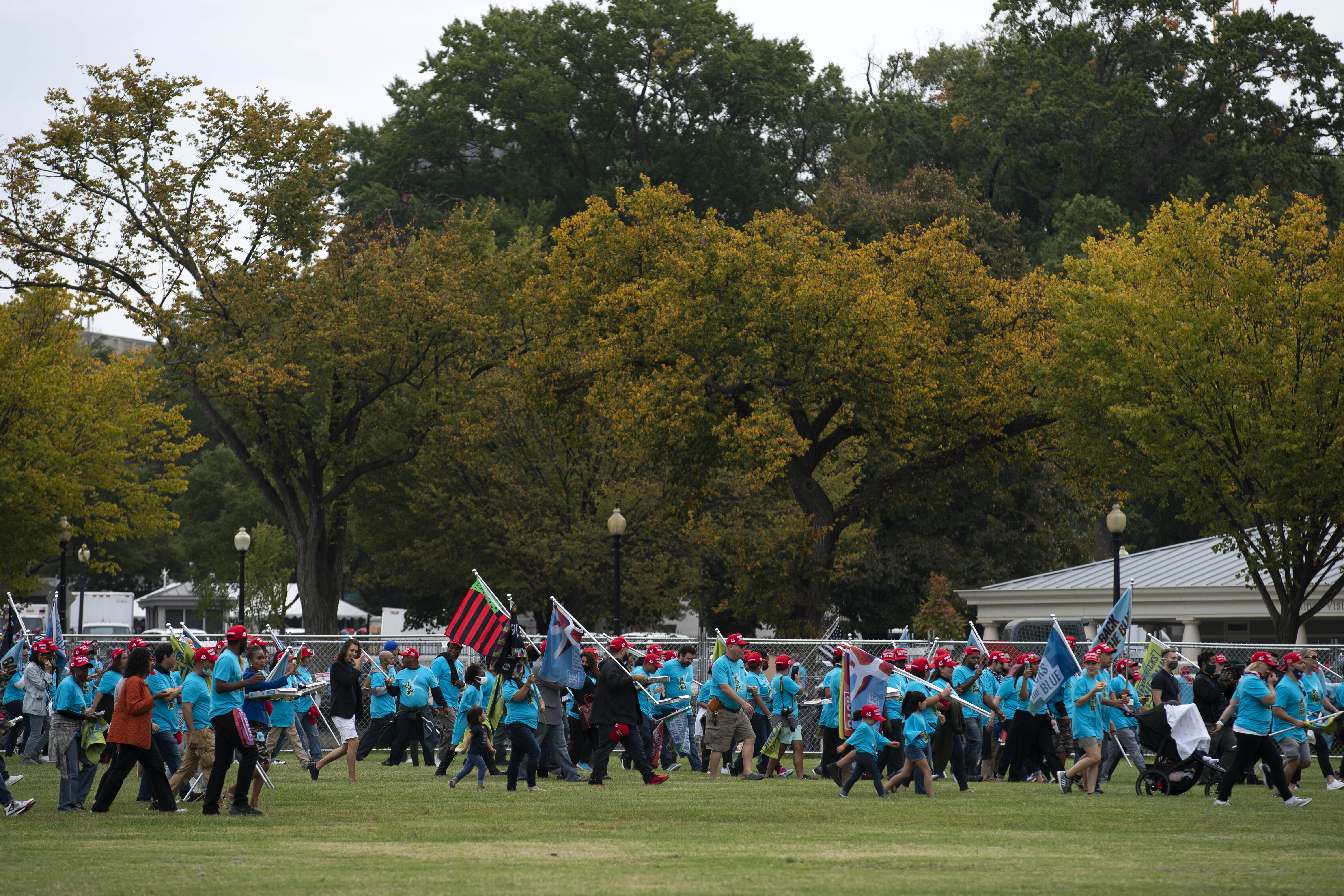 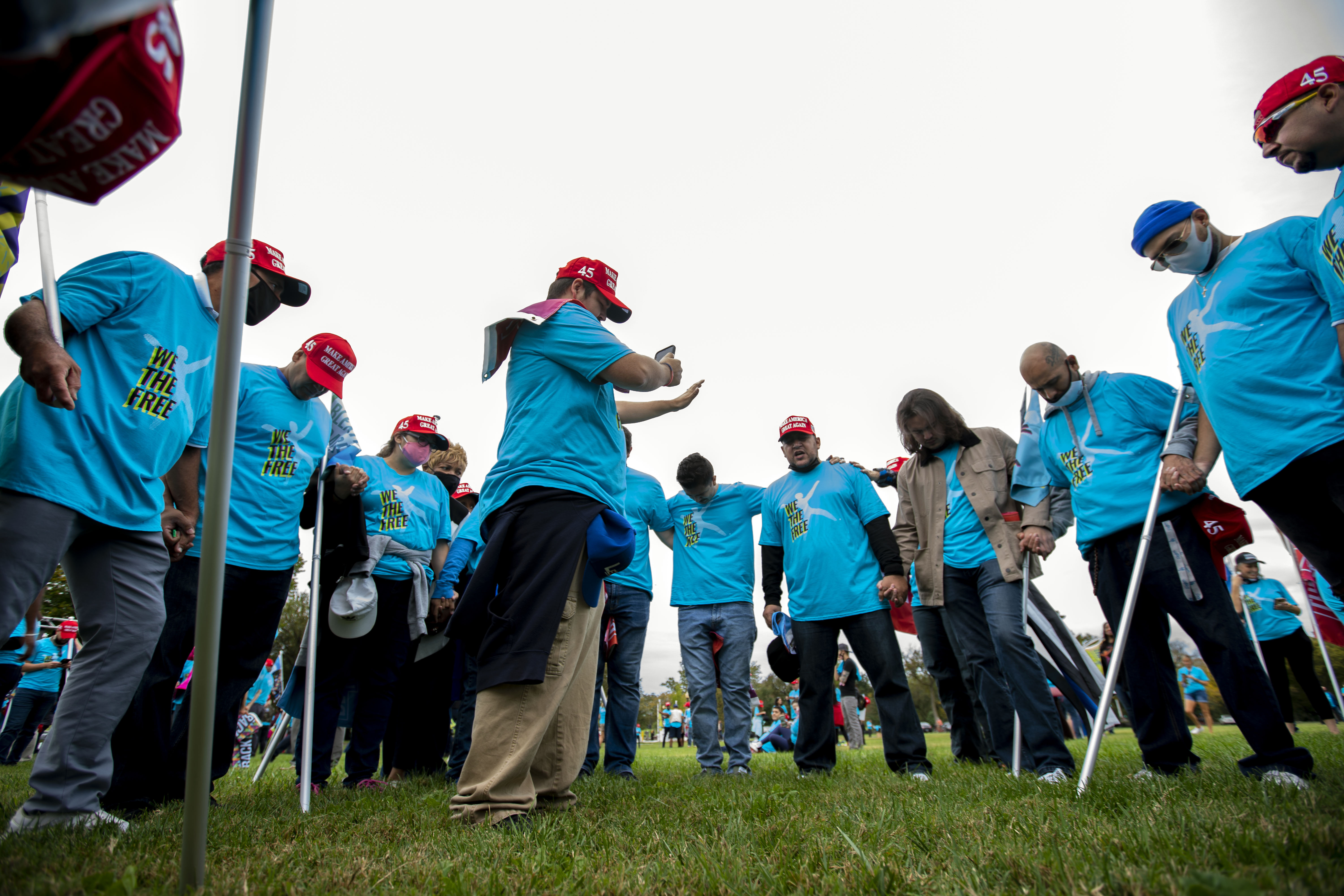 Trump will address the crowd from a balcony during the event, she added.

"He's eager to get back out and be talking to the American people," Farah said of Trump.

She continued: "Hopefully once he's been cleared by the doctor we're going to have him back on the road soon."

"We will give the all clear from the doctor on when he's cleared for travel and public events," Farah responded when asked if people would be notified when Trump tests negative for coronavirus.

According to CNN, 2,000 people were invited to attend the event.

Under the guidance, no gatherings of more than 50 people are supposed to take place.

The event comes just a little more than a week after Trump revealed he was diagnosed with coronavirus on Friday, October 2. 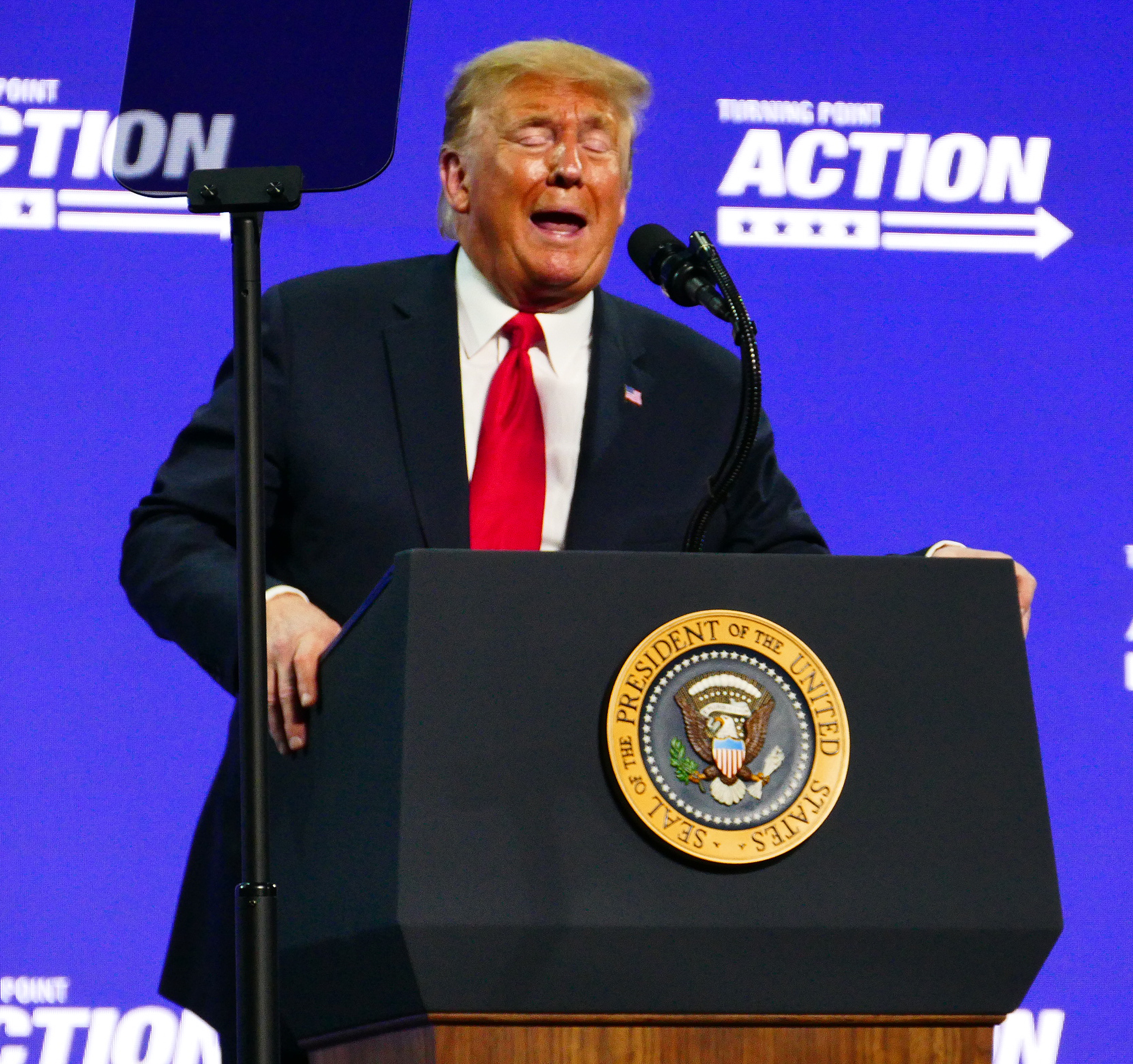 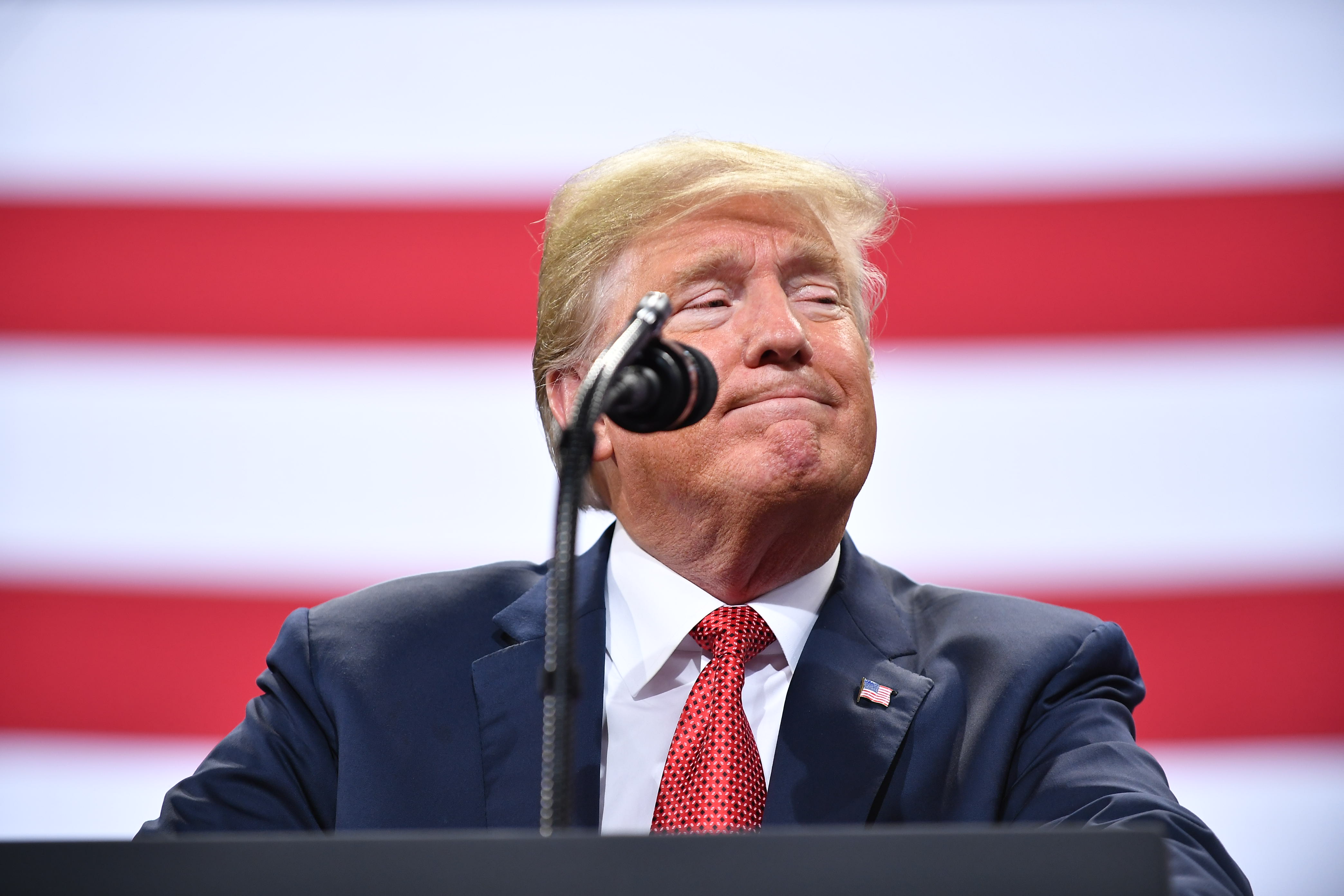 He was hospitalized later that day at Walter Reed medical center, before returning home to the White House on Monday.

The Saturday event will lead an in-person rally in Sanford, Florida on Monday.

"Will be in Sanford, Florida on Monday for a very BIG RALLY!" Trump tweeted on Friday.

On Thursday, Trump's doctor, Sean Conley, gave an update shared by the White House, saying he believes the president will be able to hold events starting on the weekend.

"Saturday will be day 10 since Thursday's diagnosis, and based on the trajectory of advanced diagnostics the team has been conducting, I fully anticipate the President's safe return to public engagements at that time," Conley said.

White House Press Secretary Kayleigh McEnany spoke with Fox News on Friday, saying she thinks Trump "will be cleared to go" and resume events by this weekend.

McEnany said, "Logistically… it would be tough" – but Trump's doctor, Sean Conley, would determine if Trump could transmit the virus to others.

"I'll leave it to Dr. Conley, because he has all the granular details of the testing and as to what the medical bar needs to be met to show that you're not transmissible," McEnany said. 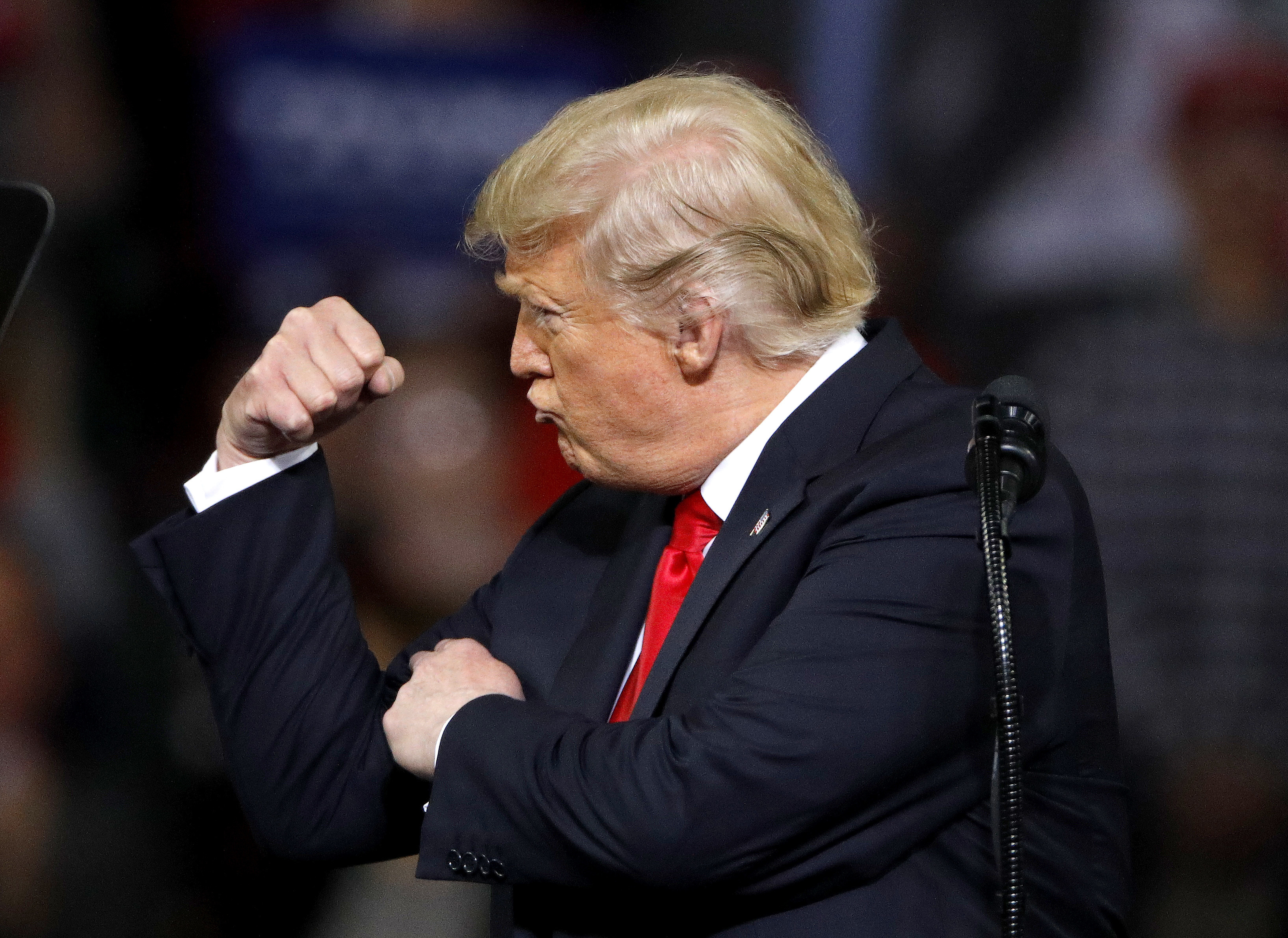 "There will be a test in place, and rest assured, that test will show it's not transmissible.

"He won't be out there if he can transmit the virus," she added.

Trump himself spoke with Fox News on Friday, saying he's no longer taking steroids and "feels really good" – but that he had not yet tested negative for coronavirus.

“I have been retested. I haven't even found out numbers or anything yet," the president told Dr. Marc Siegel of a coronavirus test he took Friday.

“I know I'm either at the bottom of the scale or free.”

Trump was one of more than a dozen White House staff and people close to him to test positive for COVID-19 after a "superspreader" event in the Rose Garden on September 26.

People were pictured sitting close to one another, with many not wearing masks.