Hunter Valley gas plant ‘would only operate a week a year’

The proposed gas-fired power station in the Hunter Valley that the Morrison government is insisting should be built would operate just two per cent of the time – the equivalent of about a week per year – and employ only 10 full-time workers.

The figures are contained in the environmental impact statement for Snowy Hydro’s proposed 750 megawatt open-cycle gas plant for Kurri Kurri in the Hunter Valley, made public on Thursday. 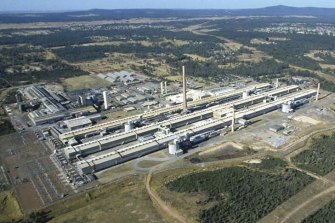 The former Norsk Hydro aluminium smelter at Kurri Kurri, near Newcastle, where the federal government is hoping to get Snowy Hydro to build a gas-fired peaking plant.

While the $610 million project is designed to operate at up to 10 per cent of the time using methane and as much as two per cent using diesel in any year, the likely average use “would be in the order of 2 per cent”, the statement said.

Dylan McConnell, an energy expert at the University of Melbourne, said the actual capacity use could be just 0.7-1.4 per cent of the time if the report’s consumption figures of 0.5-1 petajoule of gas per year are applied.

He said those gas use figures indicate that construction of the Kurri Kurri plant, if it were to proceed, would amount to the equivalent of the average gas use of only about 10,000 homes.

Similarly, the expected gas demand from the power station would provide little to support Santos’s proposed coal seam gasfield at Narrabri, which has a predicted annual production of 70 petajoules a year.

“If [Kurri Kurri’s] the basis for it, then it doesn’t make sense,” Dr McConnell said. “It confirms that it’s not going to use a lot of gas.”

Federal energy minister Angus Taylor has said that the Commonwealth-owned Snowy Hydro would step into the market to provide more capacity if suppliers failed to step forward with 1000 megawatts of new so-called dispatchable power by April 30 to help fill the gap with the 1680MW Liddell coal-fired power plant shuts in 2023.

This week’s federal budget did not announce funding for such a plant.

Gas peaking plants are designed to respond quickly to stabilise the grid, a need that is expected to rise as intermittent renewable energy sources such as wind and solar gain a larger share.

Kurri Kurri’s proposed 2 per cent capacity factor compares with about 0.5-0.6 per cent for Snowy Hydro’s existing 667MW gas-fired power plant at Colongra. Others, though, such as Origin’s 664MW Uranquinty plant run at about 6 per cent of the time, while those in South Australia typically operate with capacity factors of about 10 per cent, Dr McConnell said.