Jealous husband, 60, who brutally murdered his Asda worker wife, 56, by stabbing her 300 times in ‘episode of unspeakable and barbaric savagery’ is jailed for 18 years

A ‘jealous and controlling’ husband who stabbed his Asda worker wife hundreds of times in an ‘episode of unspeakable and barbaric savagery’ has been jailed for 18 years.

George Leather, 60, pleaded guilty to the murder of his wife Paula, 56, at Liverpool Crown Court this week.

The victim was found with up to 100 wounds to her face and neck and between 200 and 300 injuries on her body when emergency services were called to her home in Prescot, Merseyside, in the early hours of November 16.

A post-mortem found she died from stab wounds to the head and had to be identified by a tattoo on her arm due to the ‘mutilation’ of her face.

Leather used three knives to murder his wife and then went upstairs to have a hot shower.

Yesterday, Judge Andrew Menary, QC, branded the killing ‘an episode of unspeakable and barbaric savagery’ as he jailed Leather for life, with a minimum of 18 years behind bars before he can apply for parole.

Paula’s three children Jason, Jessica and Matthew told the court how their father was a vile bully who subjected their mother to a cycle of abuse over two decades. 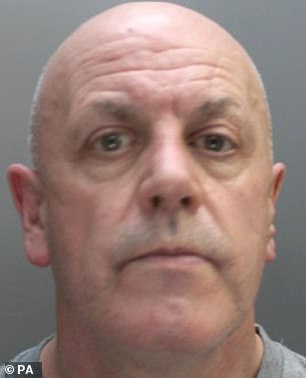 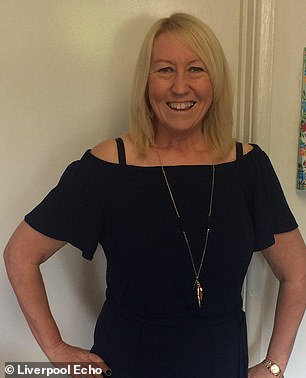 George Leather, 60, pleaded guilty to the murder of his wife Paula, 56, at Liverpool Crown Court

The family have now launched a bid to help other women escape violent and controlling partners.

Posting a message on a Justgiving page, aiming to raise money for the organisation Refuge, the family said: ‘In November we lost our lovely Mum/ Friend/ Relative/ Nanny Paula to domestic violence. We will miss her beautiful smile and kindness that showed no bounds.

‘Paula was devoted to her family and fiercely loyal to her friends and spread love to anyone she met. She will be missed beyond words and all we can hope is that your donations help someone in her situation to escape and find a safe space.

‘One in four women will experience domestic violence at some point in their lifetime and two women are killed each week in England and Wales by a current or former partner.

‘By kindly donating today you are helping to save and change the lives of thousands of women and children escaping domestic violence.’

She said: ‘This was truly a horrific and violent assault which resulted in a devoted mum and nan losing her life at the hands of her husband.

‘Mrs Leather’s three children, Jason, Jessica and Matthew, have been devastated by their loss and have struggled to come to terms with the brutal manner in which she died.’

DCI Bennett described Leather as a ‘jealous and controlling man’. She said: ‘This was not a one-off violent attack.

‘George Leather was an unjustifiably jealous and controlling man and while there were no previous reports to police, the family believe that Paula had been in an abusive and controlling relationship with her husband for a number of years.

‘Together with Merseyside Police, they want to raise awareness of the support that is available to anyone who is or has experienced domestic abuse or has been affected by it in order that nobody else has to suffer or silence or go through what they have been through.

‘For anyone who is in a controlling relationship with an abusive partner but financially tied through a mortgage or tenancy, there are confidential support services available to help you and their children.

‘If home is not a safe place for you then we want you to know that you are not alone and you do not have to stay at home if it is not safe to be there.’ 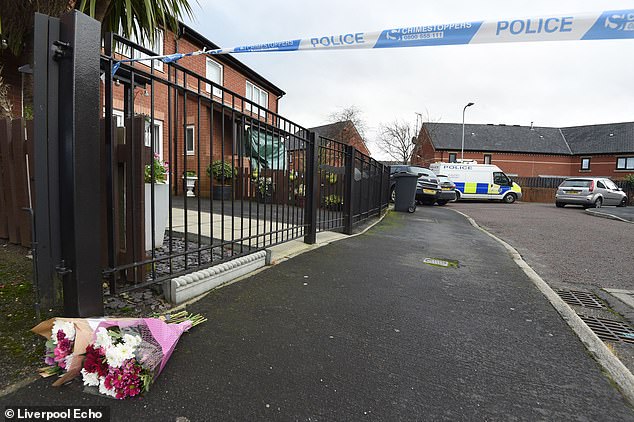 Paul Leather was discovered fatally injured at the house in Prescot, Merseyside, in the early hours of November 16. Flowers were laid in tribute near the scene, pictured by some police tape

Liverpool Crown court heard how Paula Leather had to be identified by a tattoo on her arm due to the ‘mutilation’ of her face.

The killer used three knives to murder his wife and then went upstairs to have a hot shower.

‘We will continue to work with women who are subjected to sexual harassment, or physical, or violent abuse so we can identify offenders and make the streets safer for women who live and work in our communities.

‘We as a society do need to take a strong stance against such attacks on women and we completely understand the concerns of women who feel vulnerable.

‘Women should be empowered to live their lives without fear of sexual objectification, harassment, or physical and mental abuse, but we can only achieve that by working together.

‘If you are in immediate danger, always call 999. If you ring 999 and are not in a safe position to speak to us then cough, or tap, the phone and press 55, when prompted. This will alert the operator that you need assistance and we will provide support.

‘Alternatively there is a new scheme to help victims called ‘Ask for Ani’ which gives victims an opportunity to reach out for help at pharmacies, including Boots, without making their situation obvious to other members of the public, or alerting their abuser.

‘Victims who ask for Ani I want to appeal to family, friends and neighbours who strongly suspect that someone is being subjected to domestic abuse to tell us, or to urge their loved ones to make the right decision for their own safety and peace of mind.

‘Protecting our most vulnerable communities is one of the force’s priorities and we realise that being able to support and advise victims of domestic abuse has never been more important that it is now.’