A boom in births linked to the coronavirus lockdown is putting intense strain on Victoria’s maternity services, with women reportedly forced to give birth in emergency departments or being discharged early from hospital only to return with complications.

Midwives say they are regularly asked to do double shifts that can involve 18 hours’ work through the night after bookings at some public maternity services jumped by up to 35 per cent, according to the Australian Medical Association.

Others say there is a “huge” increase in women and their babies being readmitted to hospital for wound infection treatment after having been sent home on day two rather than day three after caesareans, or suffering mastitis. Other reasons include babies “failing to thrive”, becoming jaundiced or losing more than 12.5 per cent of their body weight. 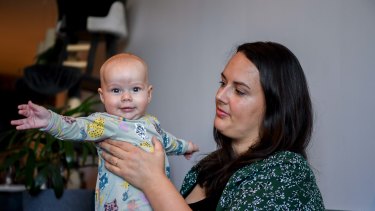 Victoria’s healthcare safety watchdog has been deployed to monitor the strong demand on services.

Australian Nursing and Midwifery Federation Victorian branch secretary Lisa Fitzpatrick said she was concerned about the possibility of “sentinel events” – preventable harm or death of patients – as a result of the staff shortages affecting a number of major hospitals across Victoria.

She said that sick babies with jaundice and other conditions were being accommodated in postnatal wards that weren’t adequately staffed.

Claire Dicarlo, a first-time mother, said she nearly gave up on breastfeeding after being discharged before a lactation consultant could give her adequate help. She said she felt robbed by her birth experience.

“This is one of the most vulnerable times in someone’s life, and it should be a time where you just feel all the support rallied around you. As much as you’re hormonal and scared, it should be a really joyous time.”

Doctors and midwives say the strain on services is resulting in some women being called in for birth inductions which are then delayed by up to a week due to staff shortages, leaving them distressed in hospital.

One experienced midwife, who didn’t want to be named because she feared losing her job, said the overload, long shifts and staff burnout was a statewide problem.

“That happens quite a bit: the hospital acknowledges you are fatigued and not at your best, so anybody who works from the PM to night duty gets taken out of high acuity and put into a quiet ward,” the midwife said.

“It’s like saying, ‘we know you’re going to be bad at your job tonight because you’re exhausted so we’re going to put you somewhere where you’re not going to make a mistake’.”

She said that one day this month at the Royal Women’s Hospital, “there were two women who had given birth in the emergency ward and three more in labour” and no available birth centre beds.

The AMA is also concerned that neonatal and paediatric intensive care units have been pushed to capacity due to the increase in births, and it says extra beds and specialist nurses are urgently needed.

The AMA’s Victorian president, Julian Rait, said the lockdown appeared to be among a range of factors that had led to the surge in pregnancies.

“Obviously [the lockdown] pushed some couples apart and it’s also brought many together and we’ve got a baby boom,” he said.

“The other theory is that people have decided to start their families now, maybe because they can’t travel.

“At the same time, the costs of private health insurance and private obstetric care is an issue and many people are now choosing to go public for their deliveries. That means our public obstetric services are being hammered like never before.”

The Victorian government confirmed the pandemic had placed increased demand on some maternity services. It did not provide statistics on recent births at maternity services, but individual hospitals are reporting increases, including at Joan Kirner Women’s and Children’s at Sunshine Hospital where there has been more than a 5 per cent jump in the first four months of the year compared to the year before.

The Health Department and Victoria’s healthcare safety watchdog, Safer Care Victoria, has been meeting with public maternity service providers, including the Royal Women’s Hospital, to discuss strategies to deal with the changing demand.

“On some occasions, care may be provided differently than planned. Any changes are to manage patient safety, and only occur with strict clinical oversight,” a government spokesman said.

Associate Professor Rait said while this week’s Victorian budget had provided $3.7 billion to help address the state’s overloaded health system, more would probably be required given the recent service demands.

Greens member for Melbourne, Ellen Sandell, whose electorate includes the Royal Women’s Hospital, raised questions with Health Minister Martin Foley in Parliament early this month about “a concerning increase in the rate of caesareans … as well as other poor birth outcomes for women” at Victorian public hospitals.

She said a constituent had her baby on the floor of a birth suite where she had been rushed at the last minute due to a lack of available birth centre beds.

“When I went into labour, I was kept in the emergency room because there were no beds available in the birth suite … I was then raced into the birth suite when I told them I needed to push and my daughter was born 13 minutes later (on the floor because I didn’t make it to the bed in time),” the woman, who does not wish to be identified, wrote to Ms Landell.

Ms Dicarlo, who had her baby at the Royal Women’s Hospital earlier this year, brought a private midwife to her birth to ensure continuity of care and said the birth and surgical care for her unplanned caesarean was excellent, but she was traumatised by her poor experience post-birth.

She had to wait two hours after her healthy son was born to hold him, and experienced long delays when in pain and needing medication.

“They were extremely understaffed and really stretched, it was really difficult to get help. You would be lying there and really need pain relief and you can’t move because you just had surgery, the baby’s screaming and you press the button and it takes someone over an hour to come,” she said.

The director of maternity services at the Royal Women’s Hospital, Jenny Ryan, said the hospital would always listen to concerns and work with patients to take appropriate action.

“Maternity services across Victoria have had a very busy start to 2021, and we are proud of our hard-working staff who continue to provide high-quality care to Victorians,” she said.