A MUM who brushed off aches as seasonal flu was left with life-threatening blisters after suffering an allergic reaction to her medicine.

Christine Sanchez Ramirez, 45, was later diagnosed with Stevens-Johnson syndrome, a rare but serious disorder that affects the skin. 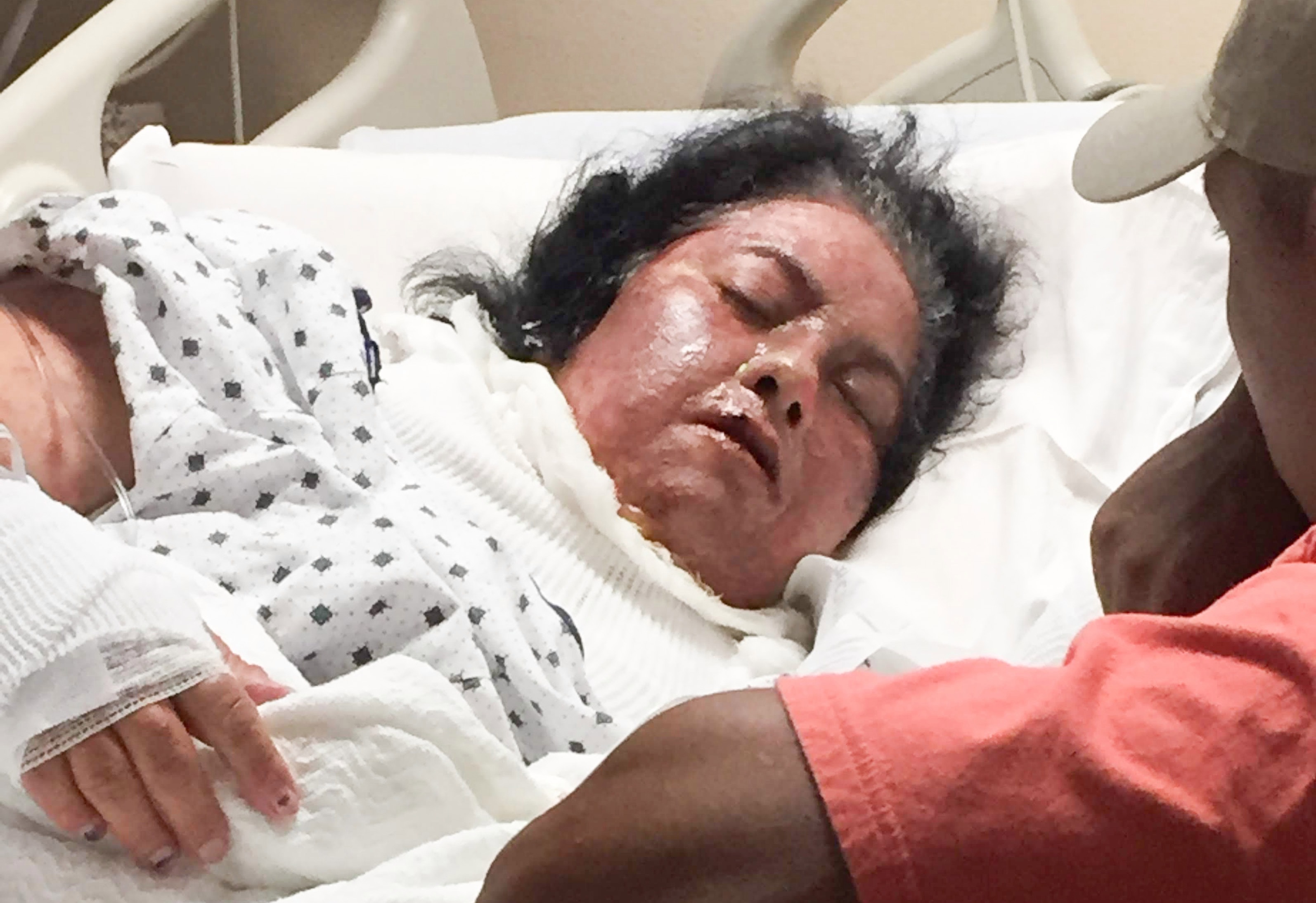 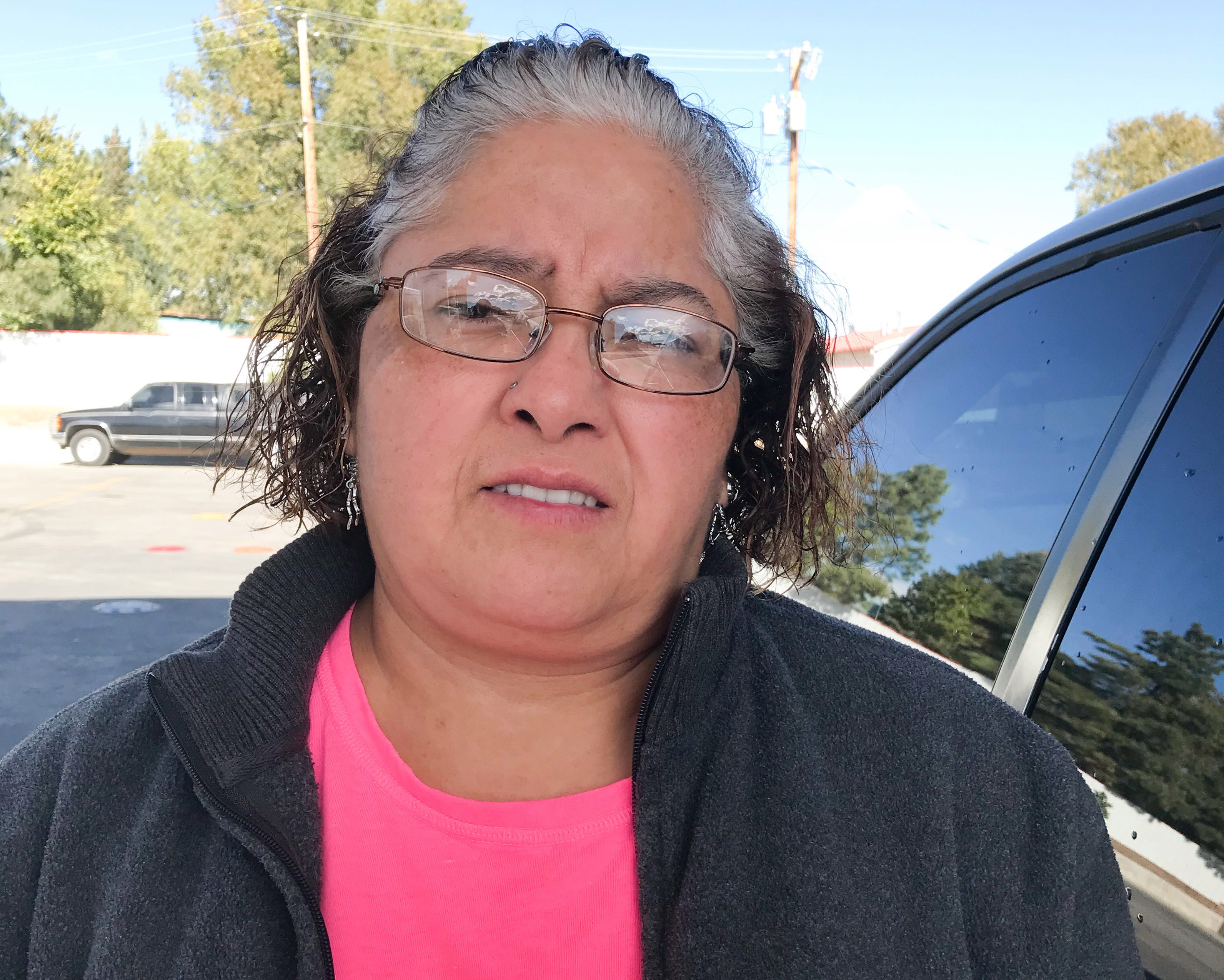 Ms Ramirez’s ordeal began when she started taking an anti-rheumatic drug in September 2018 for her newly diagnosed arthritis.

For the first four days of taking the new medication, she was fine but days later she started experiencing aches and slight swelling in her legs.

After the symptoms worsened, the mum-of-two headed to the hospital where she was kept in overnight for observation.

The next morning Ms Ramierz woke up in agony, covered in painful water blisters and unable to open her eyes.

The 45-year-old, from Las Vegas, New Mexico, was kept in hospital sedated and on oxygen for two weeks.

The hospital's burns team would change her blister dressings and coat her in Vaseline multiple times a day to help her skin heal. 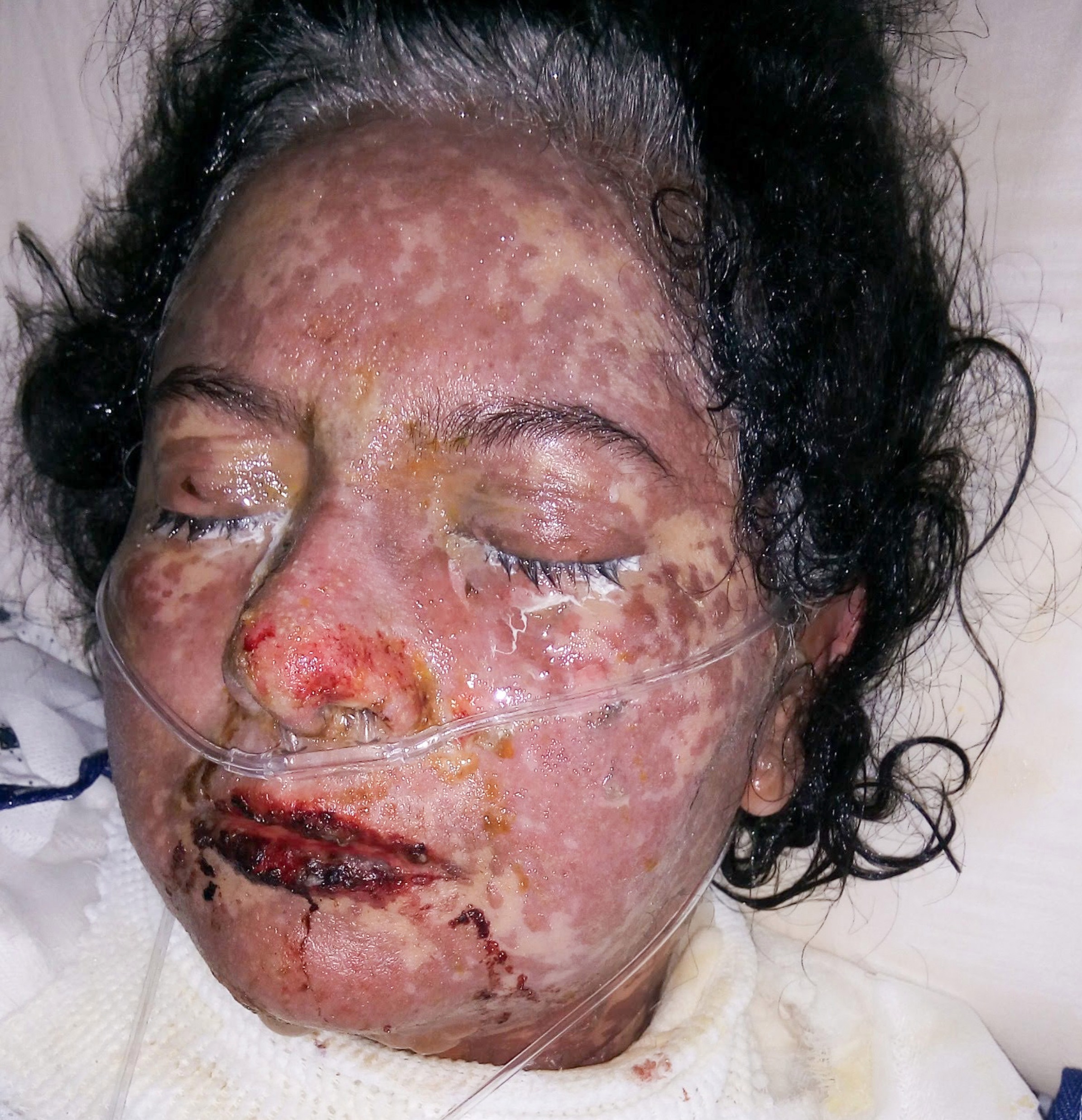 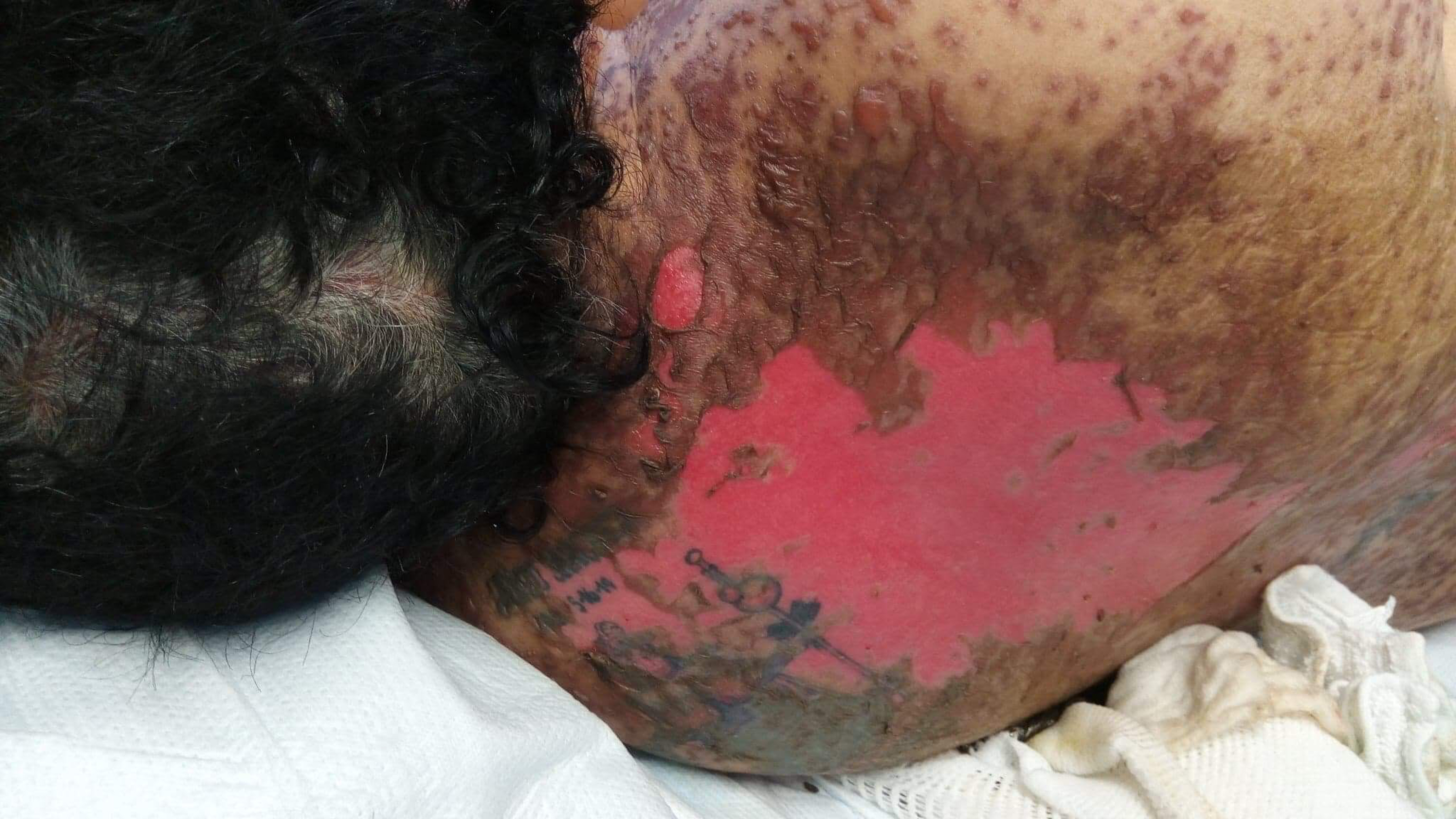 “I had painful water blisters all over me. It felt like I was on fire like I was burning," Ms Ramierz said.

“It started off with flu-like symptoms. I had aches and my lower back hurt.

“Doctors assumed it was a sprained muscle at first.

“I was worried I wasn’t going to make it. I was producing lots of fluid and I was choking on it.

“It was horrific to experience for my family and myself.”

WHAT is Stevens-Johnson syndrome and what are the symptoms?

Stevens-Johnson syndrome is a rare but serious disorder that affects the skin, mucous membrane, genitals and eyes.

The mucous membrane is the soft layer of tissue that lines the digestive system from the mouth to the anus, as well as the genital tract and eyeballs.

Stevens-Johnson syndrome is usually caused by an unpredictable adverse reaction to certain medications.

The syndrome often begins with flu-like symptoms, followed by a red or purple rash that spreads and forms blisters. The affected skin eventually dies and peels off.

Stevens-Johnson syndrome is a medical emergency that requires treatment in hospital, often in intensive care or a burns unit.

Skin pain is the most common symptom of Stevens-Johnson syndrome.

Flu-like symptoms are also usually present during the initial stages, and may include:

After a few days a rash appears, which consists of individual blemishes that may look like a target – darker in the middle and lighter around the outside.

The rash isn't usually itchy, and spreads over a number of hours or days.

Large blisters then develop on the skin, which leave painful sores after bursting.

Eventually, baffled doctors diagnosed her with Stevens-Johnson syndrome – a rare life-threatening illness which causes serious damage to the skin.

She said: “At the hospital, I felt like a guinea pig.

“All the doctors kept going to look at me because they had studied Stevens-Johnson syndrome, but hadn’t seen someone with it before.

“The medication was the first thing I tried for Rheumatoid Arthiritis and now I don’t take anything because I’m afraid of the side-effects.

“I don’t want to go through what I did again.”

Despite having now fully recovered from Stevens-Johnson syndrome, the condition has left Christine’s skin severely dry and damaged.

Once a week Ms Ramirez has to lather herself in Vaseline to keep her skin moisturised and to stop it painfully cracking.

She has also been left housebound by painful nerve damage in her feet and back which makes it difficult for her to move around. 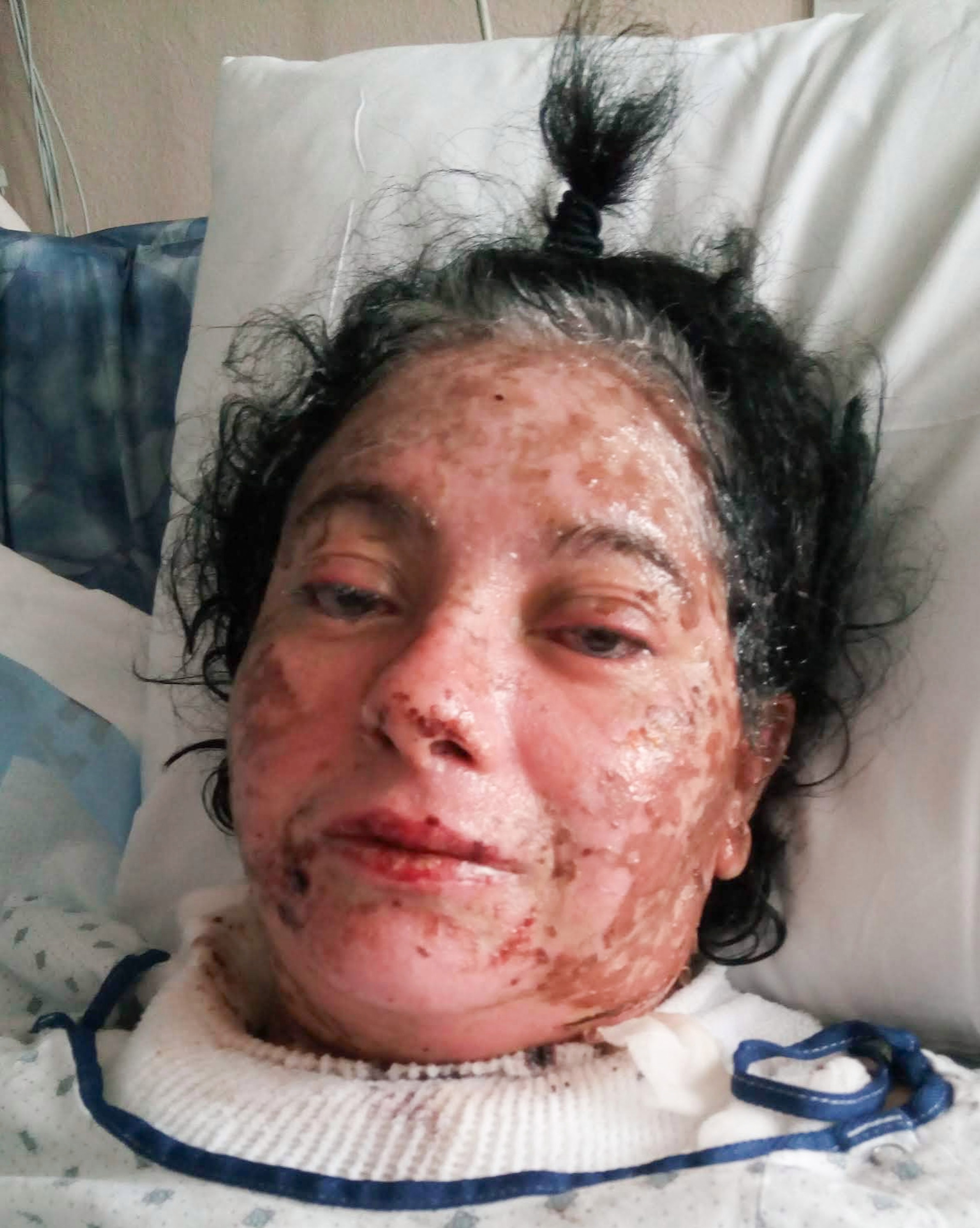 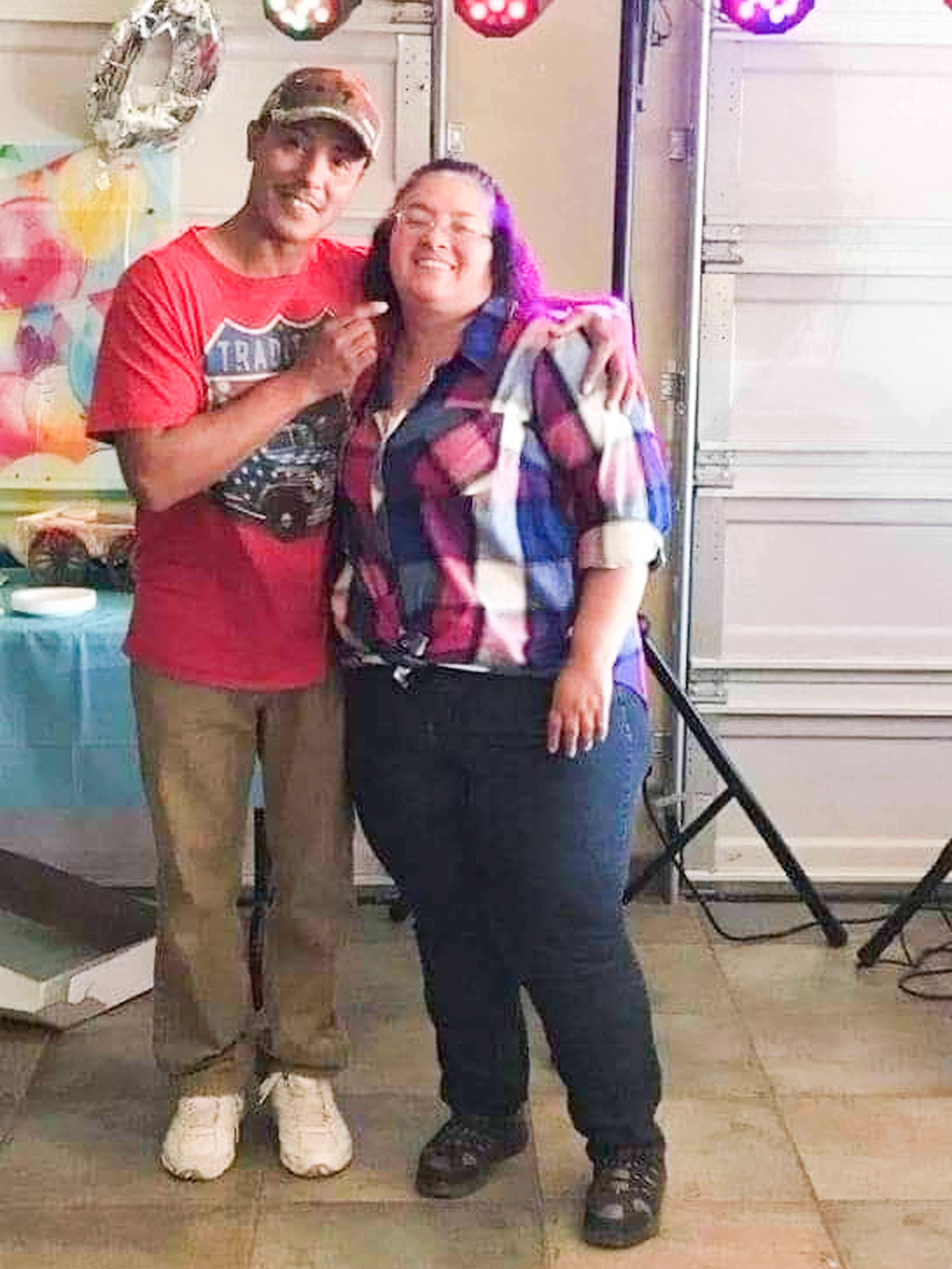